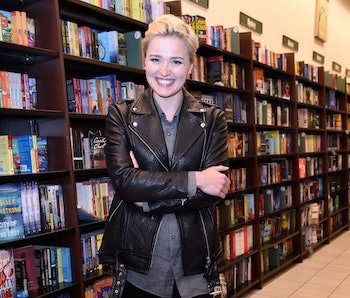 Young adult sci-fi darling Veronica Roth is best known for the Divergent series and its movie adaptation, but after two YA book series (Carve the Mark was her second), she's entered into the adult fiction space with a new novel, Chosen Ones, out now. Roth joins Inverse Happy Hour to read a chapter from her book about a group of teenagers who defeated a villain known as the Dark One. Fast-forward 10 years and they're adults still dealing with the fallout of what happened.

But not before setting the scene:

”Our five chosen ones have been summoned to attend the dedication of a monument to commemorate the 10-year anniversary of the Dark One being defeated, so they have to go and, ya know, kiss babies and be public figures basically.”

Following the live reading was a Q&A in which Roth revealed if Chosen Ones will turn into a series, what her Hogwarts house is, and her theory that there are two kinds of people under quarantine. She also took the opportunity to recommend a favorite book series.

Below are some highlights from Inverse Happy Hour:

On how the book compares to the Divergent series — “I have been thinking of it as kind of a call in response actually because Divergent is a chosen one story, which is common in sci-fi/fantasy like Harry Potter, Lord of the Rings... all chosen one stories. Divergent is one of them because the main character, Tris, has these special qualities that set her apart and make her, like, destined to save the city, so chosen one.”

“I did think after someone goes through something like, what a chosen one goes through, I don’t now that they would be well adjusted or healthy, and that’s one of the reasons I wanted to write Chosen Ones. I wanted to explore that aftermath a little bit, so they seem related in that way to me.”

On knowing our value as aspiring writers— “I recommend that you do as much research as you can into the industry that you would like to enter. I think a lot of people get eager and want to throw themselves in, and they also get desperate. They want to take whatever is offered. Definitely don’t do that. You should know your value.”

“Sarah Enni does a podcast called First Draft pod, and she’s just done, like, a heap of interviews with editors and marketing people and agents and everyone in the whole publishing industry, and those will be coming out soon and they will be so informative.”

“I follow my gut, and my gut says this is where I want to be.”

“The reason I recommend that specifically is that there’s a lot of information about how to get published. There isn’t a whole lot of information about what happens after, and I think it’s crucial to understand both, so do your research, be humble enough to accept criticism — it’s very important for helping you to grow —but also have the confidence to know what is good in your work and to fight for that. Because you have to understand what you’re offering and not change those things but be flexible to change the stuff around it or how it’s executed.”

On writing any other genre than sci-fi — “I once had an editor ask me, ‘Oh, would you write contemporary YA, which is like, you know, YA but without space ships,’ and I was like, ‘I don’t know if I can do that. I don’t know what happens in real life. If they’re not running for their lives, like, I have no idea what people do.”

“What I’ve always read is science fiction and fantasy so I can see myself playing around in that category, on the fantasy side and on the sci-fi side, but for the most part I follow my gut, and my gut says this is where I want to be.”

A huge thanks to Roth for joining us!