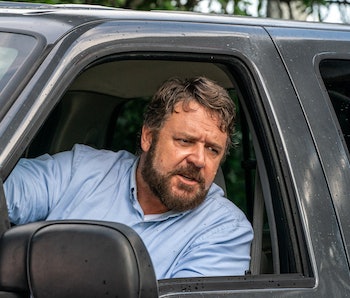 "Anger turns to rage turns to violence." That's how Derrick Borte sums up his latest movie, Unhinged. Written by Carl Elsworth, the new thriller stars Russell Crowe in the role of an unnamed man who ruthlessly, and violently, stalks a single mother (Caren Pistorius) and her child (Gabriel Bateman) after a bad bout of rush hour road rage.

"By no means are we advocating this [behavior]," the 52-year-old Borte tells Inverse. "I don't think it glorifies violence. Violence has existed since the beginning of film. It reflects the violent world we're in, and I hope that sparks conversation."

He adds, "It illuminates how quick we are to react to things and take it too far."

It was a late June afternoon when Borte spoke to Inverse about Unhinged. At the time, the film was slated to open July 1. Before our appointment, distributor Solstice Pictures — founded in 2018 with Unhinged as its first big release — delayed the film again, to July 31. It was delayed yet again to its current date, August 21, all due to the pandemic.

Now, a month and a half after our interview, major theater chains like AMC are opening again to the dismay of medical experts. Borte said at the time it's not up to him when his movie is released, but he foresees a "huge appetite" for the theaters after quarantine. "Once it's safe, the appetite will be huge," he says. "Escapist fare seems to be what people want. Hopefully, it fills some kind of void people are looking for after social distancing for months. We'll see."

But what kind of movie is Unhinged, going down in history as the first major theatrical release in the United States during (not after) a pandemic? It's a movie where a deranged Russell Crowe huffs and puffs like a bloodthirsty wolf through suburbia in daylight. It's a movie where Crowe, again, smashes a mug on the face of Westorld's Jimmi Simpson. ("My favorite scene," Borte says.) It's a movie where the heroes save the day because of a strategy from the video game Fortnite.

Unhinged is essentially an adaptation of every angry male on the news who stalk their crushes, their exes, even complete strangers. The kind of person who protests in the streets because social distancing means he can't get a haircut... or see a movie in theaters. It's an uncomfortable movie, and purposefully so.

"It's timely in that we're living in unhinged times," Borte says, shamelessly punny. "There's no shortage of shocking stories similar to this every couple days. You've had road rage. You've had someone follow you, yell at you, you name it. The film reinforces that you're one honk away at the wrong person on the wrong day. It's something anyone can relate to."

Borte makes no attempt to paint Crowe's unnamed antagonist as sympathetic. "He feels like he's invisible, and his only outlet to be heard is violence," Borte says. "Russell and I talked about people who feel invisible, let down by institutions that were supposed to protect them."

Shot over a tight six to seven weeks in the summer of 2019 in New Orleans, the making of Unhinged suffered several roadblocks that added tensions to the set.

"It's not the time you want to go, especially outdoors," the director remembers. "We got hit by the first hurricane of the year that put four feet of water in the roads and shut us down for a week. We had lightning delays. Temperatures over 100 degrees. Cars without air conditioning. It was a crazy summer."

Borte didn't come up with his movie's ending, in which Bateman's character, a teenager named Kyle, employs a camping strategy that video gamers may be familiar. Warning: Spoilers ahead.

Foreshadowed early on in Unhinged, Kyle tells his distracted mother about a strategy he uses in Fortnite, the still popular battle royale shooter from Epic Games. In the climax, Kyle deploys his strategy — waiting and luring enemies to a location for an opportune chance of elimination — when he becomes the target of Crowe's warpath.

The script was penned by Carl Elsworth, and Borte says its Fortnite ending was already in the final draft when he joined as director. "The had it there, and the script worked," he says. "It was a question of interpreting it and bringing it to the screen in some way that was effective. It was a team effort."

He jokes his own son thought the reference was kind of lame. "I have a ten-year-old son who told me Fortnite is passe," the director says. "He's like, 'Dad, you gotta change the name. It's too late for Fortnite.' Sorry, the movie's done."

With Unhinged the first movie to essentially reopen theaters (until they close again, a likely scenario), Borte is confident there's an audience for it. "We're dealing with much bigger issues than movies. The fact they were closed is smart, and hopefully we continue to do the right things," he says. "To be the movie to be in theaters when they open is awesome. It's cool. If people can go back to the movies and enjoy that communal experience in a safe way, it's a great thing."

Unhinged is now playing in theaters.

More like this
Culture
Sep. 27, 2022
20 years ago, Jackie Chan's worst sci-fi movie almost ruined his career
By Laura Kelly
Gaming
Sep. 29, 2022
How to get rad rewards from the Fortnite Paradise Discord quest
By Joseph Yaden
Gaming
Sep. 20, 2022
Everything you need to know about the latest Fortnite Reboot Rally event
By Joseph Yaden
Related Tags
Share: