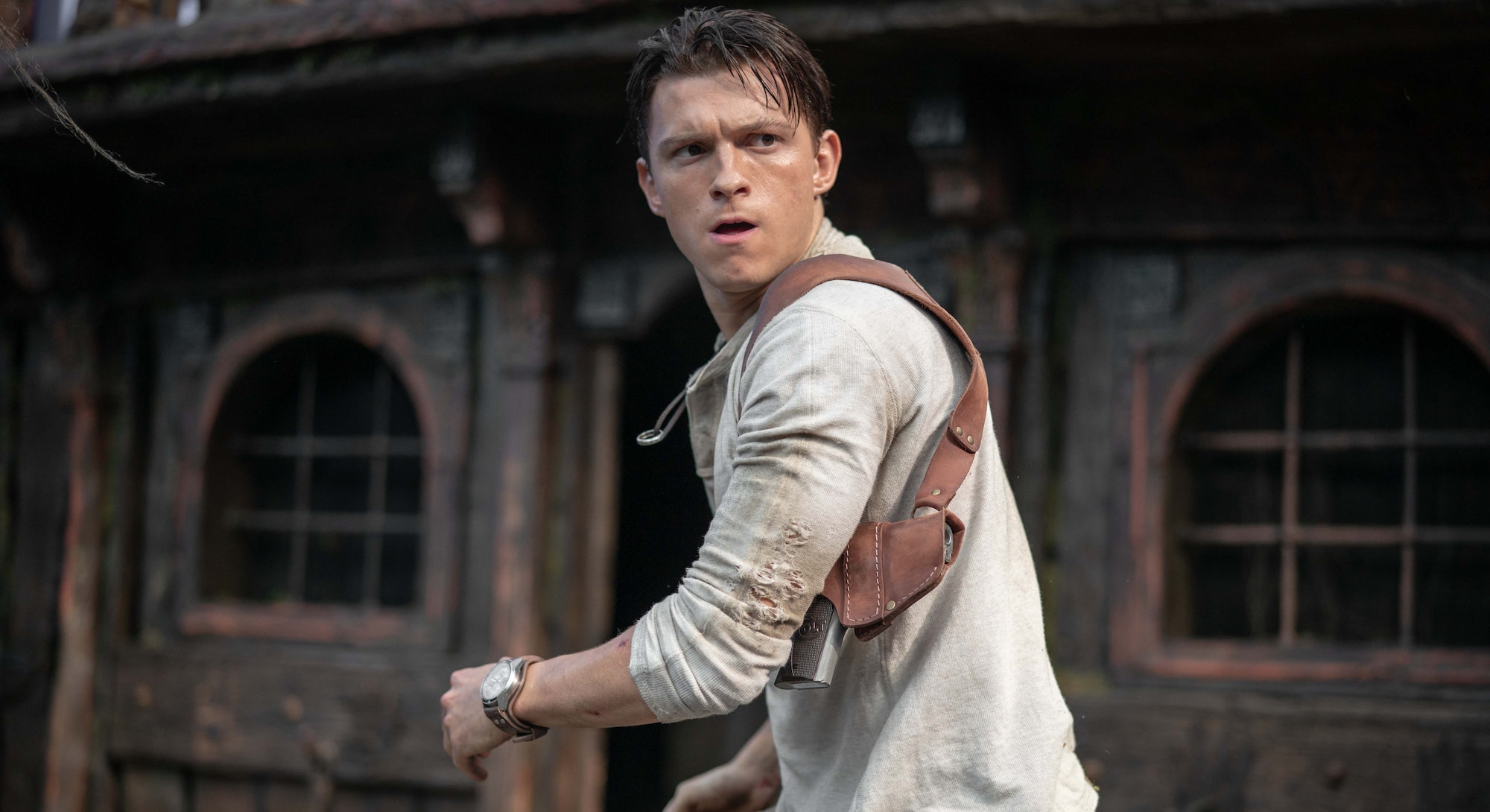 One of the most important scenes in Uncharted happens in a Papa John’s pizzeria.

To be fair, it’s a Papa John’s you’ve never seen. Inside the fluorescent pizza joint and encased behind bulletproof glass is a gorgeous historic fountain. As the plot of Uncharted teases, the fountain hides tunnels that may lead to a cache of Spanish gold worth billions.

Still, it’s hard to ignore the fact a fast-food chain is the physical setting for one of the most intense scenes in Uncharted. Unfortunately, this setting aptly describes the movie: Inner beauty made inaccessible by the demands of a franchise-driven industry.

Uncharted, in theaters February 18 from director Ruben Fleischer (Venom), is an adaptation of the PlayStation games. (Think Tomb Raider but with a handsome guy.) Inspired mostly by the third and fourth games, Uncharted stars Spider-Man’s Tom Holland as Nathan Drake, a 25-year-old drifter and thief recruited by seasoned treasure hunter Sully (Mark Wahlberg, the internet’s favorite choice to play Nathan Drake a decade ago) and his associate, Chloe Frazer (Sophia Ali) to find the lost gold of Ferdinand Magellan.

Naturally, they aren’t the only ones after the gold. A ruthless billionaire (Antonio Banderas) and his hired guns, led by a mercenary (Tati Gabrielle), are after it too. That means there are plenty of excuses for fistfights and gunfire along the way.

In theory, Uncharted had its road mapped out. Unlike other video game IP that struggled to become movies, its namesake is arguably the most cinematic video game series of all time, drawing inspiration from adventure serials and Indiana Jones. With Hollywood cinema in Uncharted’s DNA, how hard could it be to make an Uncharted movie, really?

Bizarrely, Fleischer’s film often stumbles in finding its way. Characters plod through the plot with the same tired quips of a superhero movie, and the movie dumps exposition with the same rote pace and Googled trivia of The Da Vinci Code. While the film can be exciting (its third act climax has ships tethered to helicopters), the vast majority of the set-pieces are more predictable and functional than memorable.

“Tom Holland doesn’t quite fill the Henley of Nathan Drake.”

The film sees Holland’s Nathan Drake gripping onto ceiling lights and rickety ropes with the finesse of an American Ninja Warrior contestant. It’s impressive physicality, but the air of danger is never present. Maybe this is because Sony wants Uncharted to have eleven sequels, and the fate of Nathan Drake can’t actually hang in the balance.

Even the movie’s most standout sequence — an airborne fight to hang onto loose cargo, which gamers know from Uncharted 3: Drake’s Deception — lacks adrenaline. It very well could have been the most challenging action piece filmed in the history of cinema. (That’s how Holland describes the experience in interviews.) But on screen, it never shakes off its artificiality, as though Holland was simply filmed in an indoor skydiving park.

Well-intentioned decisions and awkward executions make up much of Uncharted. Far from a bad actor (and even here, he’s as engaging as he is in Spider-Man), Tom Holland doesn’t quite fill the Henley of Nathan Drake. The attributes needed for the character — self-deprecation, testosterone-fueled arrogance, and field-tested impulsiveness — are missing.

It was Holland’s decision to play a younger, inexperienced Nathan Drake. Uncharted has been envisioned as an origin story rather than a direct adaptation of the games, in which Nathan is in his 30s and a veteran explorer. But even so, Holland’s natural boyish charms oppose Nathan’s inherent grit. In Uncharted, you’re not watching Tom Holland as Nathan Drake, but Tom Holland’s Peter Parker as Nathan Drake. While Holland is fun, he never rises above his own famous visage to truly disappear.

“A gorgeous, thrilling, and inventive climax.”

There’s still buoyancy to Uncharted that keeps things fun, however. Even as the elder Sully, the comically beefy Mark Wahlberg proves he was born for this particular IP. Both Sophia Ali and Tati Gabrielle are also seemingly made for Uncharted, wielding spunk and charisma that’s sadly never fully tapped into. Conversely, Antonio Banderas is a well-established star who seems to be a bit below his station with his two-bit antagonist.

All the best parts of Uncharted come alive in its finale, a gorgeous, thrilling, and inventive climax that does indeed live up to the video game’s legacy. If only the rest of the movie were as charged as its final twenty minutes.

Does Uncharted break the video game curse? Or is it another tragic attempt by Hollywood to rake in gamer bucks at the box office? Maybe it does break the curse, but not by much.

While Uncharted doesn’t unearth all of the treasure it sets out to find, there are still precious gems to be found. The adaptation is breezy, inoffensive, and via its source material’s cinematic inspirations, a welcome return for the escapist action-adventure genre that’s all but vanished in this age. Nothing in Uncharted is so bad it’s doomed. But with more thoughtful execution and a little more bravery, Uncharted could have lived up to its own name.

Uncharted will open in theaters on February 18.