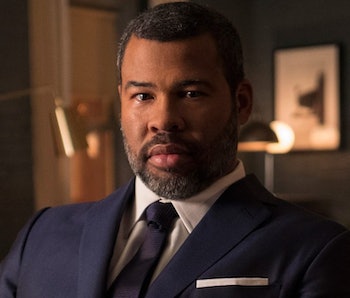 What would happen if you suddenly switched bodies with someone else? Could telepathic communication alter the way we think about dating and love? For as long as there has been science fiction, these questions have been asked, resulting in a broad variety of captivating stories. The new season of Jordan Peele's rebooted Twilight Zone revisits two familiar sci-fi tropes in a way that reminds even die-hard fans of the genre that old ideas can seem brand new. It just depends on how you spin it.

Light spoilers ahead for The Twilight Zone Season 2 on CBS All Access.

Unlike Season 1, all ten episodes of The Twilight Zone Season 2 will hit CBS All Access at the same time. Inverse has seen the first three, all of which rework familiar, old-school sci-fi premises in smart and dramatic new ways. In classic Twilight Zone fashion, these new episodes rely on last-minute twists that recontextualize the story you just watched, which makes it tough to talk about them without getting into hardcore spoilers. That said, the strength of the new Zone is its reliance on impeccably good set-ups that, in some ways, make the twists less important.

In the episode "Meet You In the Middle," a guy named Phil (Jimmi Simpson) discovers he can suddenly have telepathic conversations with a woman named Annie (Gillian Jacobs). This vaguely recalls an original 1963 Twilight Zone episode called "Mute," which explores the premise of a young girl who was raised to only communicate telepathically. On some level, it's tempting to say that "Meet You In The Middle" simply imagines that young telepath girl all grown-up. Except that's not it at all.

The notion of mind-chatting might be the central premise in both episodes, but the new one is more focused on awkward (and dangerous) telepathic adults than awkward telepathic little kids. In his opening narration, Peele describes this as a story of "crossed wires," which could reference a 1964 short story by Alfred Bester called "Out of this World," where a man receives a telephone call from a woman, who we later learn exists in a parallel dimension. The early parts of that short story play out similarly to what happens in "Meet You In the Middle," as long as you swap out 1960s Mad Men-esque dialogue for something that was clearly made in 2020. Relevantly, Bester was the first science fiction author to win the Hugo Award for his novel, The Demolished Man, a book about a future in which telepathy was common enough to prevent crime.

Do I think "Meet You In the Middle" — written by Emily C. Chang and Sara Amini — was specifically inspired by golden-oldie science-fiction standards? Maybe, maybe not, but that's not really the point. More importantly, what they did with these ideas reminded me of these classic, older stories in a way that's fresh and contemporary.

Put it like this: I love old science fiction, but I'm not sure I could recommend those Alfred Bester books to someone with a casual interest in the genre. Those stories — and some older episodes of the black and white Zone — have social norms and references that just won't fly today. TLDR: There's underlying sexism in a lot of older science fiction because an awful lot of it was written by men. Was it intentional? Hardly matters. It's still there. But with "Meet You In the Middle," there's a very honest and contemporary view of how relationships play out, and as a bonus — old-school telepathy!

At one point, Simpson also breaks a pair of glasses, which seems like a VERY obvious Easter egg to the uber-famous Zone episode, "Time Enough At Last." But again, this reference doesn't really dampen the newness of the story at all.

Similarly, in the episode "The Who Of You" (written by producer Win Rosenfeld) we get one of the greatest sci-fi tropes of all time: Body Switching! When an out-of-work actor (Ethan Embry) tries to rob a bank, he accidentally discovers he has the power to switch bodies. This could reference the classic 1960 Twilight Zone episode "The Four of Us Are Dying," which is technically more about a shape-shifter than body-switching.

Still the style of body-switching in "The Who Of You," was arguably pioneered by A. E. van Vogt in two of his pulpy novels —The Mind Cage (1957) and The Man With a Thousand Names (1974.) In fact, the initial set-up "The Who Of You" (minus the out-of-work actor) is very similar to The Man With a Thousand Names insofar as the "rules" of the body-switching are nearly identical.

But again, this doesn't make "The Who of You," a knock-off of A.E. van Vogt. That's because Peele's Twilight Zone doesn't just recycle these sci-fi concepts. Instead, the show manages to make them feel current and innovative. Somehow, every single body-switching story in Star Trek or the work of Philip K. Dick feels like a rough draft for this one. The new Twilight Zone isn't overtly trying to outdo any of these old tropes, but it often manages to do just that.

These two tropes — the telepathy in "Meet You In The Middle" and the body-switching in "The Who Of You" — are very cool. But the new Zone knows you can't build an entire serial TV series around these ideas. The concepts are, like the pulp magazines and novels that inspired them, a little corny or played out. Even so, Season 2 of Peele's Twilight Zone finds intellectual joy in reconsidering what made these concepts alluring to writers in the first place. It takes these pulpy ideas seriously. If you're a fan of any kind of science fiction, this is something of a gift. These ideas exist outside of The Twilight Zone, but when you're watching the new ones, for an instant, you feel like these events could only happen here.

The Twilight Zone Season 2 is streaming now on CBS All Access.