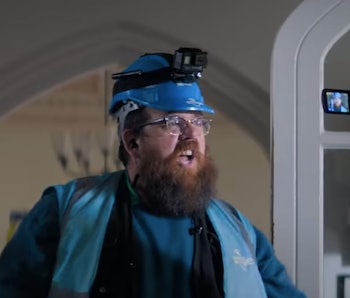 This article about the comedy horror series Truth Seekers was originally published on July 13, 2020 and updated on November 28, 2021 following the release of the season on Prime Video. Read on for the original article, with some new changes to reflect the latest updates on this topic.

If you’ve missed the collaborations between Simon Pegg and Nick Frost, then Truth Seekers might be exactly what the doctor ordered. Known for their comedic turns in Hot Fuzz and Shaun of the Dead, the real-life besties play ghost hunters in this supernatural horror-comedy series for Amazon. They also write the show, which is the first project from their new production company, Stolen Picture.

Speaking with Inverse back in 2017, Frost revealed he and Pegg were working on "something a bit special." Now it's finally coming to fruition. Truth Seekers was officially announced back in January 2018, and Amazon picked up the show in August 2019. In a statement, Frost had this to say about the collaboration:

“Simon, Miles and I, and everyone at Stolen Picture, are incredibly happy to be making Truth Seekers with our new partners, Amazon Prime Video. It’s been nothing but a joyride in seeing this mad tale of paranormal conspiracy unfold in all its understated brilliance. Amazon’s commitment and support of the show, and of original programming generally, showed us that we couldn’t be collaborating with a bigger or better team.”

Here’s everything to know about the Amazon series Truth Seekers.

When was the release date for Truth Seekers?

Truth Seekers was released on Friday, October 30, 2020. The Amazon series consisted of eight half-hour episodes and landed just in time for Halloween.

What is the plot of Truth Seekers?

Truth Seekers follows Gus and Dave, two part-time paranormal investigators who track and film their ghostly findings — complete with homemade gadgets — and stream them to an online audience. They stake out haunted houses and abandoned buildings in hopes that there’ll be a supernatural sighting. However, the longer they continue to investigate, the more creepy their adventures get, and they soon find themselves trying to solve a conspiracy that could put the whole world in danger. It’s basically a paranormal Armageddon with a humorous twist.

Who is in the cast of Truth Seekers?

Here’s the cast list, alongside the characters they’re playing:

Is there a trailer for Truth Seekers?

Yes! Check out the hilarious trailer below.

Here’s an updated trailer with some additional footage and the release date confirmation.

Was Truth Seekers renewed for Season 2?

Unfortunately not. In February 2021, Nick Frost posted a now-deleted video to his Instagram. “Truth Seekers has not been renewed,” he said, “which is a massive kick in the willy for me. We really put our all into this – our heart and soul, and blood in some cases — so to not come back is really sad for us. It’s a shame. I think we had lots of lovely ghost stories to tell, stories that will remain untold.”