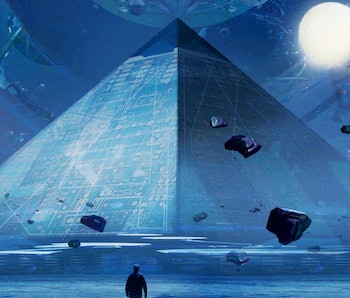 David Benioff and D.B. Weiss are leaving Westeros behind for good. The Game of Thrones showrunners will adapt The Three-Body Problem, the science-fiction book series by Liu Cixin, into a live-action series for Netflix. Here's everything we know about the streaming giant's upcoming blockbuster project.

What is Benioff and Weiss's role in The Three-Body Problem?

After the poor reception of Game of Thrones Season 8 and a weird parting of ways with Lucasfilm over a potential Star Wars trilogy, Benioff and Weiss are tackling another ambitious fictional adaptation to the small screen.

The Three-Body Problem expanded to a trilogy collectively titled Remembrance of Earth’s Past, which was first published in a science fiction magazine in 2006 and book form in 2008. Now, Netflix has been granted the right to adapt the trilogy into an original series, which will expand the streaming service’s sci-fi offerings.

Alongside Benioff and Weiss, the series is being developed by True Blood’s Alexander Woo. Rian Johnson and his frequent collaborator Ram Bergman will act as executive producers. Meanwhile, Cixin will oversee the project as a consulting producer alongside Ken Liu, who wrote the English translation.

In a statement, Benioff and Weiss had this to say about developing Three-Body Problem:

“Liu Cixin’s trilogy is the most ambitious science-fiction series we’ve read, taking readers on a journey from the 1960s until the end of time, from life on our pale blue dot to the distant fringes of the universe. We look forward to spending the next years of our lives bringing this to life for audiences around the world.”

This is the creators’ first project with Netflix after signing an overall deal with the streamer in 2019.

When is The Three-Body Problem coming to Netflix?

The Netflix series does not yet have a date set. It’s possible that it’ll be years before the live-action show is released, but stay tuned for more info.

Is there a trailer out for The Three-Body Problem?

Not yet, as the series has not gone into production just yet. Watch this space because as soon as the trailer drops, it’ll be here.

Who is in the cast of The Three-Body Problem?

In October 2021, Netflix announced the cast of The Three-Body Problem. It includes several alumni from Game of Thrones, the MCU, and more:

What is the plot of The Three-Body Problem?

The title refers to the three-body problem of orbital mechanics, which is the study of three objects or particles in motion (i.e.: the sun, the moon, and the Earth). The story follows Ye Wenjie, an astrophysicist who is imprisoned and later recruited by military physicists to damage spy satellites.

However, she discovers that she can enhance radio waves from inside the sun to send messages into space. Eight years later, Ye is able to make first contact with an extraterrestrial from the planet Trisolaris. Ye knowingly responds to the Trisolarian despite the alien’s warning against it and alerts the invading planet of Earth’s presence. The Three-Body Problem effectively weaves together Chinese history, culture, and politics. The books are pretty hefty with information, so we recommend checking the series out ahead of the live-action release.

How many episodes will Three-Body Problem have?

It’s unclear how many episodes the sci-fi series will have. But, if we had to guess, it will likely consist of eight to ten episodes. Historically, Netflix’s sci-fi originals have had one-hour episodes as well, but the runtime now depends on the series (The Umbrella Academy Season 2 had shorter episodes than Season 1).

Will Three-Body Problem have a spinoff series?

It feels odd to talk about a spinoff series already, considering that The Three-Body Problem has yet to even debut on Netflix. But eagle-eyed fans noted an entry in ProductionWeekly for a project called The Dark Forest, featuring the same production team as The Three-Body Problem. Notably, The Dark Forest is the name of the second book in the Liu Cixin novel trilogy. The logline for the project proper even harkens closely to the novel of the same name:

In The Dark Forest, Earth is reeling from the revelation of a coming alien invasion-in just four centuries’ time. The aliens’ human collaborators may have been defeated, but the presence of the sophons, the subatomic particles that allow Trisolaris instant access to all human information, means that Earth’s defense plans are totally exposed to the enemy. Only the human mind remains a secret. This is the motivation for the Wallfacer Project, a daring plan that grants four men enormous resources to design secret strategies, hidden through deceit and misdirection from Earth and Trisolaris alike. Three of the Wallfacers are influential statesmen and scientists, but the fourth is a total unknown. Luo Ji, an unambitious Chinese astronomer and sociologist, is baffled by his new status. All he knows is that he’s the one Wallfacer that Trisolaris wants dead.

The Three-Body Problem is currently in development at Netflix.