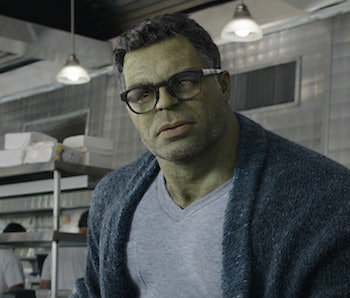 Thor: Love and Thunder may be the biggest film in Marvel's Phase Four. The highly-anticipated movie is currently in the midst of pre-production and is expected to begin filming in January 2021. The movie already includes the return of Natalie Portman as "Mighty Thor" and Christian Bale in a mysterious role. Now, a leaked casting call indicates an alien species and their potential role could reveal how the Hulk returns after Avengers: Endgame.

First introduced in The Avengers, Mark Ruffalo’s version of Bruce Banner/Hulk has been most closely tied with Thor: Ragnarok. That’s probably because the film included the character’s biggest and most personal storyline thus far. Hulk is already rumored to be returning to Thor’s side in Love and Thunder, and this time it could very well kick off another segment of a major Hulk comics storyline.

An alleged casting call for Thor 4 is looking for extras who are under five feet tall who will be available to film in Australia between January and May 2021. The casting call requires that the actors have runner body types and be comfortable wearing prosthetics and makeup. They must also be willing to shave their heads for the role.

The casting call doesn’t indicate what roles the extras are being hired to play. However, based on the criteria, we can surmise that they’ll be portraying the short, insect-like alien species native to Sakaar. Of course, Ragnarok already introduced the Sakaaran native Miek, who was enslaved and made to fight as a gladiator before joining Hulk and Thor in their battle against Hela. Miek also appeared in Avengers: Endgame, where he and Korg aided in the final battle against Thanos.

What many may not know is that Miek and the rest of the Sakaaran natives played a crucial role in the Planet Hulk storyline, which was partially depicted in Ragnarok. In the comics, Hulk is exiled to space following his attack on Las Vegas and his shuttle ultimately lands on Sakaar. There, he joins up with Miek and the rest of the Sakaaran people (both native and otherwise) in a bid to overthrow the Red King and regain their freedom.

It’s possible Love and Thunder will finally introduce more of Miek’s people and carry out the World War Hulk storyline, which follows Hulk’s return to Earth for revenge on the Illuminati, the discreet superhero team responsible for his banishment to space in Planet Hulk. After all, we know that Miek laid eggs at the end of Ragnarok, birthing a whole new generation of Sakaaran natives who could appear alongside Hulk in Love and Thunder.

After Endgame, Hulk is now a lot more docile, having figured out a way to merge both personalities and suppressing his alter ego's tendency to smash everything in his path. However, Hulk's newfound calmness doesn't mean that his storyline is over and Love and Thunder could adapt certain parts of the World War Hulk storyline as a way to close out the final chapter in his arc.

After all, we don't really know the whole story regarding his transformation. Maybe Love and Thunder will reveal that something isn't right about Banner's explanation, leading something to trigger Hulk's return to form. Who knows? It's possible Hulk wants revenge on Banner for keeping him in the dark and that battle for mental dominance is what will lead to World War Hulk. Whatever the case, the potential inclusion of the Sakaaran natives could lead to an explosive Hulk return — and it may prove to be the character's best storyline yet.