Kevin Bacon on monsters, 'They/Them,' and bringing his Mutant to the MCU 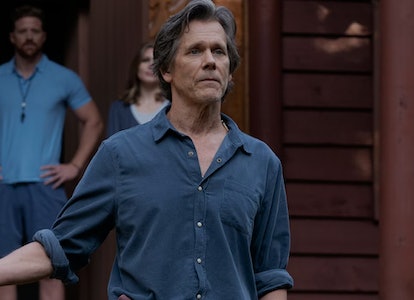 Kevin Bacon is no stranger to the summer camp slasher film. He famously got an arrow to the neck in Friday the 13th. Now, 42 years later he’s taking on a new and more challenging summer camp role as the villainous leader of a gay conversion camp in They/Them on Peacock.

Bacon plays Owen Whistler, the owner and leader of a camp where queer teens are sent to “become normal” again. But how do you play a character with so much hate inside in a way that still allows him to feel like a human being? It was a challenge for Bacon, as well as writer and director John Logan.

“If someone commits a terrible crime, the first thing people will say is, ‘We caught this monster,’” Bacon tells Inverse. “The sad reality is that you didn't catch a monster. Monsters are the stuff of fantasy. What you caught was a human being.”

Finding the human inside of Whistler was essential to Bacon’s process.

“What I tried to do is not think about the acts they're committing, but to focus more on who they are, where they're from, what do they like, what do they not like,” he says.

Whistler may be the head of a horrific institution, but for the lead characters of They/Them, the most terrifying part is just how normal he seems. That’s an element underlined by Bacon’s performance.

They/Them (pronounced “They Slash Them,” because it’s a slasher movie) is the directorial debut of screenwriter John Logan, who penned Gladiator, Skyfall, and The Aviator. He tells Inverse that Friday the 13th was an inspiration, although the summer camp horror movie has not always been kind to the LGBTQ+ community. Take, for example, Sleepaway Camp, which ends with a twist revealing that the killer was a deranged trans woman.

These movies became the foundation for Logan’s script. When asked what movie horror fans should watch to prepare for They/Them, he responded with Sleepaway Camp, a controversial cult classic that ends with a twist revealing that the killer was a deranged trans woman.

“Weirdly, I would suggest they watch Sleepaway Camp,” he says. “And I would suggest they watch over the early slasher films like The Burning or the first few Friday the 13th movies. This is the world we’re playing in. What happens if you put a queer lens over that entire world? How does it reverse everything? Loving and grappling with those horror movies led me to finally produce this one, which I hope is all about sort of empowerment, as opposed to degradation of queer ideas.”

But the empowerment of the queer campers comes in the face of oppression, a role Bacon humanizes through his performance.

“I've only played maybe two monsters, and one was a Mutant,” Bacon says. “If that's what I'm playing, then it's great. I play a monster as a human being.”

“It's a multiverse, right? I love that stuff.”

The “mutant” is a reference to Bacon’s role as Sebastian Shaw in X-Men: First Class. Bacon is a longtime Marvel fan and has a desire to join the Marvel Cinematic Universe.

“I was in one side of the Marvel Universe,” he says in reference to the X-Men franchise. “Do I still have an opportunity to get into the other side? It's a multiverse, right? I love that stuff.”

If his performance in They/Them is any indication, Bacon has the potential to bring any “monster,” be they human or mutant, to life with disarming charm. Owen Whistler may be the leader of a conversion camp, but he seems like he genuinely cares for these teens’ development. The secret to his performance? Pacing.

“One of the hardest parts of being in a horror movie is budgeting your fear levels,” Bacon says. “Finding new ways to be scared is a real acting challenge.”

It’s this slow burn that creates Owen Whistler, a character with loyalties so hard to pin down that it’s difficult not to relate to him at the start. He may be scary because of what he represents, but there’s a reason it’s called homophobia. He himself is scared, of progress, of change, and of having to question his assumptions.