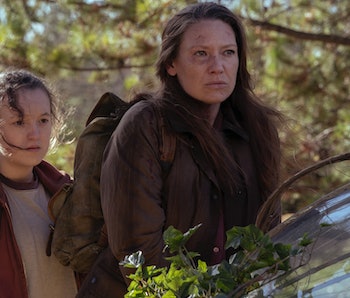 The Last of Us never bothered to pretend it was a show that cared about keeping characters alive. In Episode 1’s heartrending 30-minute prologue, we’re introduced to Sarah Miller, Joel’s daughter and the love of his life. Then we see them trying to escape a zombie apocalypse, and before we realize what’s happening, Sarah is fatally shot by a government officer.

It’s clear no one is safe. That’s proven again by the end of Episode 2, in a moment that not only says goodbye to an important character, but that gives Joel and Ellie the catalyst they need to set off on their journey.

Joel and Tess were asked by Marlene to smuggle Ellie to the Massachusetts State House, where her fellow Fireflies would supply them with everything needed to leave the QZ and travel to Wyoming. The plan almost went off the rails when Tess discovered Ellie was infected, but eventually this only proved that Ellie really is immune to the virus.

After a detour through a museum and a nasty encounter with Clickers, they finally make it to the State House, only to find everyone there killed. Apparently, the question of potential infection led the Fireflies to kill each other, leaving a load of supplies — including a lot of explosives — up for the taking.

Joel insists they return home, but Tess drops a bombshell: she can’t. She was bitten in the museum, and now she only has hours to live. Tess does all she can to communicate to Joel that he needs to take Ellie west and discover what the Fireflies can do to stop the spread of Infected.

After Joel shoots a straggling Infected survivor, he awakes the horde the gang saw earlier in the episode. Now, Joel only has about a minute to make a decision, and for Tess, there’s no decision to make. She starts knocking over barrels of gasoline while tossing grenades left and right. She says she’s going to ensure the horde doesn’t follow Joel and Ellie.

Joel’s survival supersedes his sentimentality, and he takes Ellie far from the State House. Tess remains inside, waiting for the Infected to burst in so she can light the gasoline on fire and take the horde down, with herself among them.

But when the Infected do stumble in, they don’t chase her down like they normally do. In fact, their tone is almost welcoming. An Infected approaches her while she tries to get her lighter to work, and it kisses her, allowing the tendrils from its mouth to enter hers. It’s gross, but it’s also intimate, the connection of two bodies in a vast fungal system.

But no matter how poetic the Infected’s behavior is, Tess is still on a mission. At the last second, the lighter finally catches, and she blows the State House up. Now, Joel and Ellie are forced to carry on, both to pursue a cure, but also to ensure that Tess’s death isn’t for naught.

The Last of Us is now streaming on HBO Max.