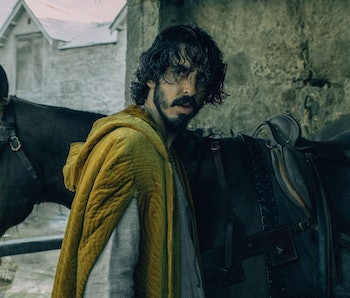 The Green Knight is weird — and confusing. (As someone who loved it, I mean that as high praise.)

But even the A24 fantasy epic’s most ardent defenders can agree that David Lowery’s impressionistic pilgrimage through Arthurian lore isn’t an easy film to understand.

That’s especially true of its ending, which plays out almost wordlessly and climaxes on such an unexpectedly sardonic note that there’s no doubt most people will file out of the theater perplexed. If you’re one such viewer seeking some guidance in understanding the film’s final moments, you’re in luck.

Here’s our take on what happens at the end of The Green Knight — along with what it means.

Major spoilers for The Green Knight ahead.

What happens at the end of The Green Knight?

In its final minutes, The Green Knight sees Dev Patel’s Gawain finally come face-to-face with the film’s titular figure, his inevitable executioner. However, when the Green Knight goes to bring his ax down upon Gawain’s neck — replicating the blow that Gawain delivered to him a year earlier — Gawain panics and runs away, aware that he will not survive the swing. He finds his horse waiting for him across a nearby stream and goes back home to Camelot.

From there, we see the rest of Gawain’s life play out in a procession of wordless images: he becomes king, abandons the prostitute who loves him after stealing her son, marries a noble lady from another land, loses said son in battle, and eventually sees his whole kingdom turn against him. It’s a distressing and dark sequence that culminates with Gawain sitting alone in his throne room, intruders pounding on the door. We see Gawain reach into his abdomen and begin tugging on the enchanted sash that was given to him earlier in the film, the same one that’s said to protect him from death. He pulls said sash out from his body, at which point his head falls off.

The film cuts back to the Green Chapel, and Gawain opens his eyes. We realize that everything we just saw was nothing more than a vision of what would happen if he fled from his fate.

Gawain, realizing this, takes the sash off and tells the knight he is finally ready. The Green Knight pauses, smiles, and kneels down next to Gawain. “Well done, my knight,” he says, before adding, “Now, off with your head.”

The film then cuts to its ending title card, leaving the audience with one natural reaction: “What just happened?”

At the start of The Green Knight, Gawain is a bit of a cad, to put it mildly. He’s a selfish, uncharitable young man, interested only in taking from the world and those around him without giving anything back in return. That’s especially evident in his one-sided relationship with Alicia Vikander’s Essel, which suffers as a result of Gawain’s desire to receive sexual gratification, love, and companionship without giving any back in return.

That’s what makes the Green Knight’s “game” of blows such a brilliant trap for the young knight. It forces Gawain to, for the first time in his life, hold up his end of the deal. If Gawain doesn’t seek out the Green Knight and accept the same blow he so eagerly meted out against the mystical warrior on Christmas Day, he will be branded an unhonorable coward and denied the reverence and status he’s wanted his whole life.

Once Gawain finally sets off on his quest to meet the Green Knight, his journey is punctuated by moments and challenges that further emphasize and test his selfishness. However, there’s one section of the film, in particular, that I believe serves as the key to understanding both its ending and the importance of Gawain’s final decision.

The sequence in question comes early on in the film when Gawain stumbles upon an abandoned farmhouse in the middle of the night. The building counts as its only occupant the ghost of a young woman (Erin Kellyman), who asks Gawain to retrieve her severed head from the bottom of a nearby lake so that she may finally find peace.

Gawain, standing on the edge of the pool, asks the woman what she’ll give him in return for helping her. “Why would you ask that?” she says in response, shaming Gawain into retrieving her skull free of charge. The sequence subsequently ends on a brilliantly ironic note, with Gawain placing the girl’s head on top of her skeleton and waking the next morning to find the Green Knight’s ax, which had previously been stolen from him, sitting upright across the room.

When faced with the spirit of a woman who’d been wrongfully murdered, Gawain only wanted to know what was in it for him if he helped her, so the girl rewarded him with the instrument of his doom. Although he doesn’t realize it at first, this is a reminder to Gawain that the only true “reward” waiting for us in life is death.

The ax is one of two major symbols that writer and director David Lowery uses to his advantage in The Green Knight — the other being the green sash given to Gawain, first by his mother (Sarita Choudhury) and later again by the lady of a strange castle (played, like Essel, by Alicia Vikander).

The sash, which Gawain wears when he enters the Green Chapel at the end of the film, represents his desperation to hold onto life at all costs. He sacrifices all his virtues and kindness in order to maintain possession of his life. But as the film’s climactic flash-forward sequence ultimately reveals, the sash ultimately burrows into his abdomen and kills him slowly from within.

The ax, on the other hand, represents an acceptance of death. That’s why the ghost returns it to him early on in the film, and it’s why the Green Knight wields it in the first place. Only after Gawain accepts that his death is inevitable can he truly see past his own desires and fears and fully grasp his place within the natural world. Once he does, he achieves the understanding and peace that had previously eluded him.

All of which is to say that, while I personally believe the Green Knight does follow through on its deal and chops Gawain’s head off, it ultimately doesn’t matter one way or another. The point isn’t whether Gawain perishes at this moment but rather that he’s courageous enough to finally accept his death. In doing so, he gives in and embraces the world around him for the first time. Gawain’s choice is a necessary relinquishing of control and a moving reconciliation of the relationship between life and death, man and nature, self and surroundings, that exists within all of us.

After all, it’s only in letting go of the things that weigh us down that we can stand up straight and breathe freely once again.

The Green Knight is playing in theaters now.