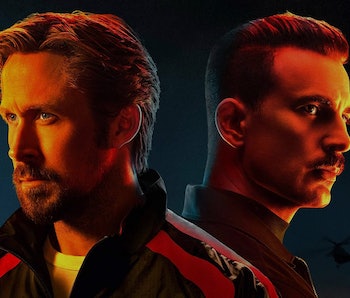 No pre-flight safety video covers what to do when the people onboard want to kill you. Fortunately, Court Gentry — a prisoner-turned-CIA-spy who works under the moniker Sierra Six — is prepared for this exact scenario. When his captors get the call to destroy him thousands of feet above ground, the resulting explosive fight rips the aircraft from cockpit to wing.

The above is just one of nine impressive action sequences in The Gray Man, directed by Anthony and Joe Russo, the brothers behind Avengers: Endgame and other Marvel blockbusters. One of Netflix’s most expensive projects to date, the film — based on Mark Greaney’s novel by the same name — stars Ryan Gosling and Chris Evans, along with Ana de Armas, Jessica Henwick, Regé-Jean Page, and Bollywood’s Dhanush. After working with the Russos on four Marvel movies, a homicidal Evans trades his Captain America’s shield for Lloyd Hansen’s “trash ‘stache” while hunting down protagonist Six (Gosling) over the course of two action-packed hours.

Six has 007’s skills minus the swagger. There are no suits or martinis in sight as he jumps across continents on the run from Hansen, a psychopathic freelance assassin known for breaking protocol to get the job done at any cost.

Evans brings charm to his character’s chaos. When he enters a scene, you’ll want to pay attention to the banter and quips. “Hey sunshine,” he greets Six the first time they meet face-to-face. Hansen maces Six in the eyes, Six digs at Hansen’s white pants and facial hair, and when Six drops a hand grenade between their feet, Hansen gives him credit where credit is due: “Ballsy.”

Another one of his standout lines: “Wanna make an omelet? You gotta kill some people.”

Gosling, meanwhile, nails gray man Six’s no-strings-attached stoicism and survival instincts. As the plot progresses, he forms a handful of connections that turn him into a multidimensional hero. By far his most endearing scenes are with Claire (Julia Butters), the teenage daughter Six’s mentor who pulled him out of prison and recruited him for the CIA. Six, perhaps seeking to mend his own childhood wounds, steps in as a father figure to Claire and stops at nothing to rescue her from Hansen.

Yet outside of the occasional flashback to Six’s abusive childhood, the Russos never dig too deep into his character development — there’s always a fire that needs to be put out instead. The car chases and fight scenes eat up so much screen time that it’s difficult to appreciate each action sequence for its well-placed tension and intricate moves.

The Russo Brothers say they were challenged by the sheer number and scale of these shoots. The visual effects and split-second stunts pay off in wow factor, the characters shine brightest in quieter moments where the movie can explore morality and what it means to be good versus evil — and the gray areas in between.

The Gray Man may refer to Six’s ability to disappear in plain sight, but it also speaks to the CIA’s credibility and the loyalty, or lack thereof, of its agents. Six’s former employer — Denny Carmichael (Page), the Director of National Clandestine Service at the CIA — is the same person who’s put a target on his back. Then there are colleagues like Fitz and Maurice Cahill (Alfre Woodard), who would both literally and figuratively take a bullet for Six. You’ve also got accomplices like Avik San (Dhanush), whose spontaneous change of heart alters Six’s fate. Turns out, the CIA is a complicated place to work, and there’s no telling who you can trust on the ground or in the air.

There’s no easy solution to all the conflicts introduced here, and given Netflix’s reported interest in expanding The Gray Man into a long-term franchise, this initial chapter leaves us with a few unanswered questions that make room for promising future storylines. In the meantime, eat your popcorn and enjoy the explosions.

The Gray Man opens in theaters July 15 and hit on Netflix July 22.