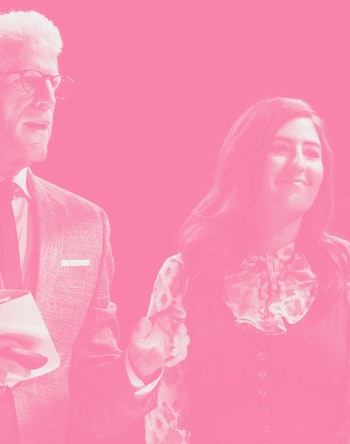 The Good Place might end with yet another huge surprise you won't see coming.

Well, that's a given considering he beloved sitcoms many twists and terms, but Inverse's recent interview with series art director Adam Rowe may have revealed a few hints that a hugely important set piece is slated to return in the show's bittersweet finale in a way that feels natural for a show about the afterlife — and yet also totally surprising.

Warning! Possible spoilers for the series finale of The Good Place below.

What if, after spending an extended period of time in the actual Good Place, the core cast of characters, rather than walk through the new door that ends their existence, instead walk through the door that leads them back to Earth?

Wouldn't it make a lot of sense for The Good Place to end on a bittersweet note of full reincarnation for the core cast rather than endless, boring bliss or a true death?

Not convinced? We're not just speculating, we basically know for a fact that the bridge that connects the real world to the afterlife will make a reappearance in the show's final episode.

"When we made the bridge in Season 3 that opens the series and we meet the guard, it's a real bridge designed by Ian Phillips," Rowe tells Inverse. "In real life, it’s about five feet off the ground. David Niednagel, our visual effects supervisor, took Ian’s sketch and turned that into the image we see onscreen."

Rowe explained that the relatively short bridge breaks apart into pieces that can be assembled in different permutations. The place where Michael walks onto the bridge and the end platform where the guard sits are, in fact, the exact same physical space.

And at some point in the series finale, this bridge — or at least the prop bridge — will return in some capacity.

"That same bridge makes an appearance at the end of the series and somewhere else I won’t say," Rowe confessed. "Parts of it are the same. You have to rely on so many people to make this one bridge piece work in so many different ways without putting the audience into fatigue."

“That same bridge makes an appearance at the end of the series.”

Does that mean the specific bridge to Earth is featured at the end of the series? Or just that the production team repurposed the physical setting for a new location?

In the penultimate episode, "Patty," Chidi and Eleanor meet Hypatia of Alexandria (Lisa Kudrow) in the Good Place and she explains that “when perfection goes on forever, you become this glass-eyed mush person." The alternative that the gang comes up with is to introduce a new door that, when walked through, would end a person's time in the universe. A person can spend as long as they might want in the Good Place until they decide to "walk through one last door and be at peace." In an interview with Variety, series creator Mike Schur noted how this grapples with philosophical ideas related to "death with dignity."

Schur explained that the Good Place wound up being miserable for most people and the idea that anyone can willfully end their time there makes them cherish it even more.

"I don’t want to spoil anything about the finale, but that was absolutely the idea of this episode: we’re just going to tell you there’s an option," he said. "The problem with how they were reacting to their surroundings was that they were trapped. It was the eternal version of golden handcuffs: everything is perfect, and there is no option for it not to be, and that becomes a bummer."

Does that mean the grand finale might present yet another option for Eleanor, Chidi, Tahani, and Jason?

"I’m very curious to see how people respond to the end because of how much joy the show has brought people," Rowe said. Working on the original set of the Neighborhood at the NBC Universal backlot, Rowe saw many fans of the show "go to Yogurt, Yoghurt, Yogurté like it’s a religious spot!"

"It was so joyful for me to watch people be connected and have nostalgic feelings over this really old building," he said. "Knowing that this season has resonated with so many people, I’m so curious to see how people respond to the ending."

When pressed for more clarification, Rowe merely agreed that The Good Place will continue to do the unexpected in the series finale. Even though the boundaries and expectations seem clearly laid out after the penultimate episode, there's something that most fans won't see coming.

"This isn’t really a tease, but I’m really happy that the show always — all the way to the end — is keeping us as makers and as viewers wondering where this is going," Rowe said.

Does it have something to do with this walkway? Will these characters somehow return to their lives on Earth or be reincarnated into new humans? Or will they merely walk through this new door that leads to their ultimate demise? Since the very beginning, The Good Place has grappled with heady philosophical concepts that make them easily digestible, and it sounds like the finale will continue that legacy beyond this life and into the next.