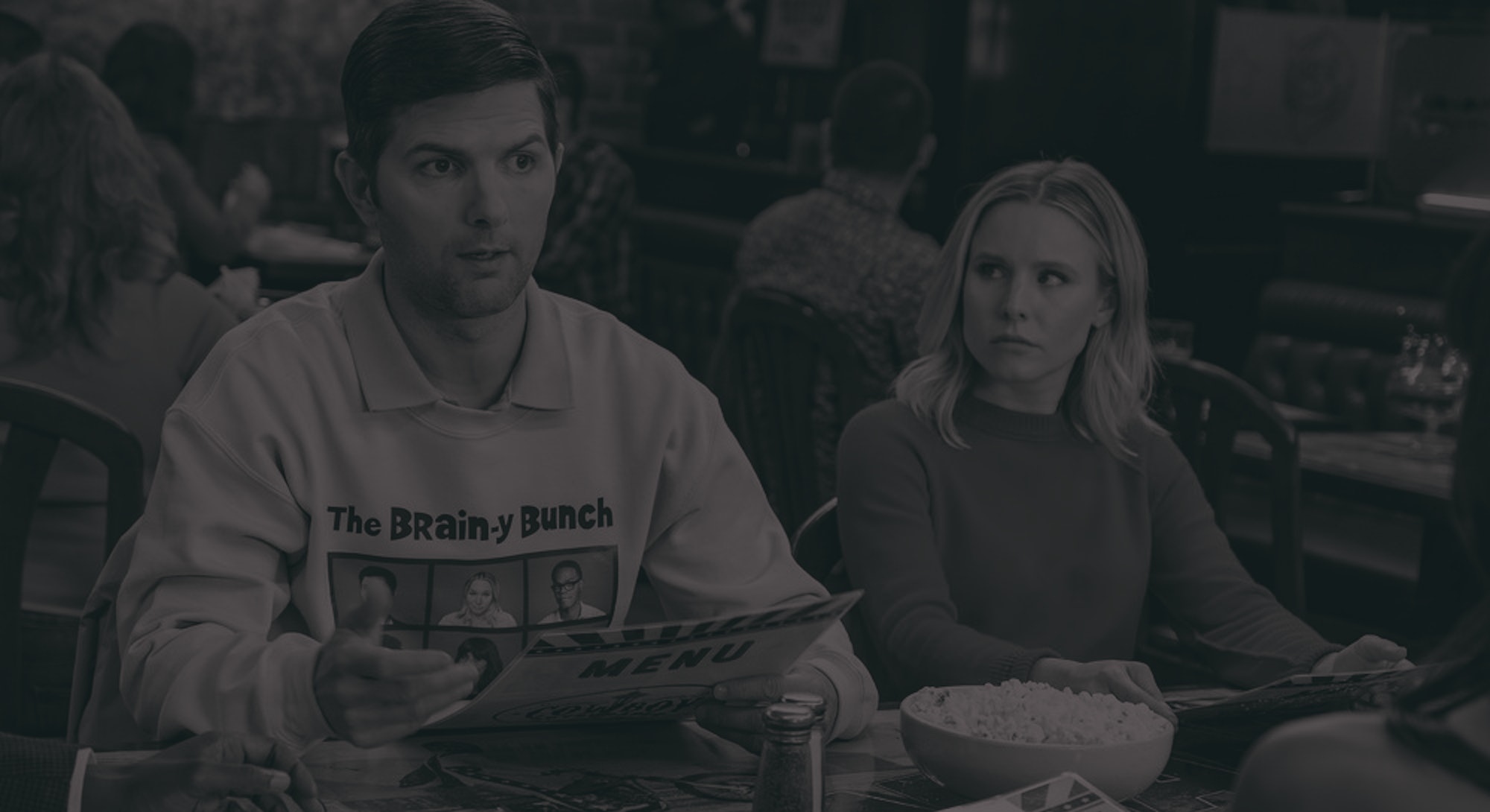 As a show built on the premise of a godly architect who could create his own version of heaven (or hell) on the fly, The Good Place ran through a lot of different sets and props — and that was before the plot expanded to new locations like Earth and the Interdimensional Hole Of Pancakes (IHOP).

But when Adam Rowe, The Good Place's art director since Season 3, reflects on his time with one of the weirdest and funniest sitcoms in recent memory, he's drawn to the many pieces of set dressing he created that never actually made it in front of a camera.

"We never know where the camera is going to look, so there’s a lot more funny in sets that we do that people don’t always get to see," Rowe tells Inverse. "A good example from this season is when we go to Senegal and see young Chidi. That whole apartment was dressed, but the camera is really only focusing on the chalkboard. We never turn around, but there’s a lot of fun dressing to inform who Chidi and his parents are."

According to Rowe, one of the visual jokes we miss include a poster of Chidi's beloved Hypatia of Alexandria, which would have been a bit of clever foreshadowing. The ancient Egyptian philosopher turns up in the show's penultimate episode, titled "Patty," where she's played a by a milkshake-guzzling Lisa Kudrow.

But one of Rowe's favorite sets of all time was Cowboy Skyscraper Buffet, the cartoonish America-themed restaurant that the gang visits during Season 3 when they're all living in Australia. Again, there's a lot you missed from that set, but read on for our conversation with Rowe to learn all about what went into creating Cowboy Skyscraper Buffet and the various other worlds that make up The Good Place.

Are there any specific pieces of set dressing that you’re particularly proud of?

There’s quite a few! Kim Wannop is the decorator for the show and she tries to find interesting things or beautiful moments. Our prop master Gay Perello is also vying for those funny moments too. The set that brought it all together for me was the America-themed restaurant in Australia: Cowboy Skyscraper Buffet. There was a little bit of funny from everybody in there. When you have actors posting things to Instagram and Twitter just because they’re having such a good time on set, you know you’re doing it right.

The Montana table was all about Dana Carvey and Evel Knievel. Mount Rushmore had David Hasselhoff and Judge Judy’s faces on it. One was a monster truck toy crawling over the Grand Canyon. We brought so much whimsy to that restaurant.

When it comes to putting together a set like Cowboy Skyscraper, what's the role of an art director look like?

I’m essentially a conduit of information between the different departments. With Cowboy Skyscraper we shot at a real restaurant that was a Hamburger Hamlet in the San Fernando Valley. It comes to me, I scout it and decide with the production designer how many graphics and dioramas we need. I take all that to construction coordinators and painters and a props person and set decorator. We create a scene and price it out and bring that to the producers. These are informed by concept meetings with the showrunner, writers, producers, and directors.

Then we go and make it.

I’m scheduling and working with everyone to build the pieces. For Cowboy Skyscraper, that meant a lot of graphics on windows, unique tabletops, menus, dioramas. On top of that, that was only one-third of the episode or less, and we’re working on everything at the same time.

I remember we had to workshop with D'Arcy Carden because they wanted Janet to hold the biggest beer steins possible, but Janet had to walk with six beers in her hand. Darcy dropped the first set, so we tried to fake it, but you can't cheat anymore with TV. We had to go with smaller beers.

Where can fans learn more about details like this? Or are they just lost to time?

Mostly lost, I’m afraid. In many ways, this is an industry built on secrecy and holding things back. People ask me a lot if I can be more active on Instagram and post pictures, but 90 percent of the time I’m working on something that might be a reveal or somehow a secret, especially for a show like this. As much as I want to post something like Derek’s Kill Switch or a surprise from the series finale, I can’t.

I hold a lot of information that could ruin the ending, so the question becomes when I would post something. When the show airs? How much later? As for how fans can experience it, I think the sad truth is that it’s all ephemeral. You have to ask these questions while the show is hot — and then it’s gone. The few artifacts we hang on to goes into some NBC archive. Maybe they’ll be available or maybe not.

I think often about all the murals from Parks and Recreation that I also worked on. I don’t know where they are. I have a feeling they’re in a warehouse somewhere and no one will ever see them again. And they were brilliant! There was already a mural on the wall that was the point of view of Pawneeans as Eagleton people take over their town. Well, we made the other side of that mural: The point of view of Eagleton being taken over by the people of Pawnee. It was hilarious and beautiful and it never got aired. We made it for the episode and they ran out of time and dropped the scene. I don’t remember why.

On any show, this is what happens. We make it, and then it’s just gone.

“It's all a cartoonish version of reality.”

The Good Place is unique in that it always feels like a show that's reinventing itself and becoming something new and surprising. What was it like to come on board in Season 3 when there were so many different things going on?

Season 3 was really fun to work on. We had a lot of fun doing the combination of the afterlife and their real life in places like Australia and Florida and Arizona, but it’s all a cartoonish version of reality. If you pay close enough attention, you see that everything in Australia references either a kangaroo or a koala. The restaurants all have some kind of Finding Nemo or fish reference. Eleanor’s eating kangaroo snacks. When Eleanor is in the hotel room, the magazines were always poking fun at Australia in Australia.

When we were in Florida, the set dressing had nods towards Parks and Recreation, specifically Pillboi’s apartment. It had one of the signs from Parks and Recreation on the wall. For people who are fans of the show, it’s delightful to look at. Not only are we making fun of the world, but we’re commenting in a comic strip way. We’re not trying to replicate real life. There are lots of Solo cups and patio furniture floating in the pool. Does that actually happen in Florida? I don’t know. Maybe? But we were accentuating.

I love the Randy "Macho Man" Savage International Airport. If you look closely, you can see that we struck out the "International" part, as if they somehow lost their credibility as an international airport.

Part of the exuberance I felt with Season 3 was that how it was really on its feet in the sense that there were a lot of different places. We weren’t ever in one place as a filming crew for very long. From the art department’s standpoint, we did between five and seven different sets in a single day. We only get four or five days of prep for any given episode, so it can get quite challenging to deliver under such a crunch collaborating with all the different departments.

What was one of the funnier behind-the-scenes conversations you had for the show?

This season we were in several meetings talking about goo. What color is it? Is it like mucus? Is this too gross? Do we want this spraying all over everyone? Are the actors going to be game for it? Throwing all this goo on them? They were, even more than once.

Was that when the demons were exploded?

Yes! It was used when Vicky gets destroyed at Demon Con and when Glenn gets destroyed in Mindy’s house. Her house had blue goo on it all the way to the end! It was just splattered everywhere. We did the best we could to clean it up. There was one stain towards the front door that I could never get rid of, and stains on some of the furniture. We were just like, “Leave it!” We decided to just let it be.

What images or pieces of art do you think fans of the show will always remember?

If people hardly remember the show in 30 years, I think Janet’s outfit is an iconic thing that people will remember.

From what I understand Kirston Mann, our costume designer, worked with Kristen Bell on the collars of her shirt in Season 3. They started to catch on and people began replicating them. Similarly, the Bad Place pins. Our prop master Gay Perello had those made, and they’re coveted. There’s only 20 that we had and they were always keeping track of them. Then you have people online making them.

“NBC is hanging on to them as these cherished museum artifacts.”

The demon who would always rip his shirt off? I met him at the wrap party. I wanted to give him a Bad Place pin, but I couldn’t because NBC is hanging on to them as these cherished museum artifacts. You never know what people will gravitate towards, but those pins are one of them.

What’s next for you after The Good Place?

That ended for me in August and jumped right on a movie called The Prom for Netflix. It’s a Ryan Murphy production. I did American Crime Story and American Horror Story before. His visions for design and what they allow is so much fun. I’ll be on this for four or five weeks, and then I’ll be open for pilot season.

What’s The Prom about?

It was a Broadway musical that’ll be a movie. You get to see Meryl Streep sing and dance, along with Nicole Kidman, James Corden, and Keegan-Michael Key.

The series finale of The Good Place airs Thursday, January 30 on NBC at 8:30 p.m. Eastern.