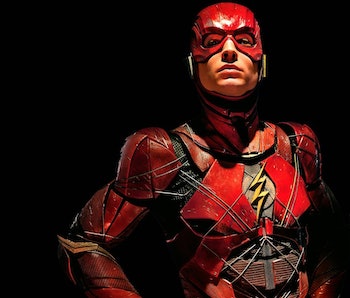 Justice League star Ezra Miller was arrested in Hawaii. The DCEU darling, who is slated to reprise their role as Barry Allen aka The Flash in a highly anticipated standalone film in 2023, reportedly threatened a couple staying in the small town of Holi after barging into their bedroom and demanding the pair hand over their wallet, passport, and other personal belongings.

On top of getting hit with a restraining order on the evening of March 29th, Hawaiian police had their fill of Miller throughout their stay in the state, as the 29-year-old actor was the subject of 10 calls to the cops. Issues ranged from a violent altercation at a karaoke bar following a rendition of Lady Gaga and Bradley Cooper’s “Shallow,” which led to Miller’s arrest, to more minor offenses like filming people at a gas station, refusing to leave a restaurant, and starting public beefs.

Miller has since been released from jail after posting bail, but the Flash and Fantastic Beasts lead may have to deal with a punishment far more costly than shelling out $500. Is their Flash film run finito? Will they be silently excluded from Fantastic Beasts: The Secrets of Dumbledore press à la Ansel Elgort during West Side Story’s press tour?

In 2011, while shooting The Perks of Being a Wallflower in Pittsburgh, Miller was charged with drug possession — police reported finding 20 grams of marijuana in their vehicle — but the charges were later dropped, and they were instead penalized with a $600 fee.

Nine years after that fairly harmless misdemeanor, Miller choked a fan in Reykjavik at a “trendy bar” the actor frequented in April 2020, after they allegedly lost their temper in the face of “pushy” eagerness from young women who spotted the actor.

And in January 2022 Miller posted a video on their Instagram that threatened members of the Ku Klux Klan in Beulaville, North Carolina — a branch of the white supremacist hate group that has, at least according to the Southern Poverty Law Center, not been active in recent years in Beulaville. In the video, Miller is seen wearing a ring with his Justice League character’s symbol.

While Miller has a history of bad behavior, the fashionable, out-and-proud LGBT and polyamorous actor has also been lauded for their forthrightness when it comes to their gender identity, sexuality, and sense of self-expression. They’ve graced numerous covers, taken part in buzzy photoshoots, and snagged big-time roles.

Why The Flash is important to the DCEU

The Flash is rumored to be the first of several Warner Bros. movies intended to establish the “Crisis on Infinite Earths” event in the DCEU. Comparable to Marvel’s Multiverse of Madness scenario, it’s already had a successful television test run on The CW’s Arrowverse. Miller made a surprise cameo during that episodic crossover special, which aired between December 2019 and January 2020.

The Flash, which has repeatedly been pushed back thanks to the pandemic, will likely be an adaptation of the 2011 comic book series Flashpoint, during which Barry partners up with an alternate reality Barry to save his mother from murder. That has some pretty notable implications given that her murder is what triggers his origin story, but perhaps what fans are most looking forward to is the return of Michael Keaton as Batman, which he played in 1989’s Batman and 1992’s Batman Returns.

Ben Affleck is also set to appear as his respective version of Bruce Wayne, and a number of other established DCEU characters, including Michael Shannon’s Zod and Temuera Morrison’s Thomas Curry, are set to return too. Recently, one leak suggested that Henry Cavill will also be reprising his role as the Man of Steel.

While many details of The Flash have been kept under wraps, it appears to be shaping up as of the DCEU’s biggest movies yet.

While Miller may have retained their Flash creds after years of documented troublemaking for Snyder’s version of Justice League and the forthcoming solo Flash flick, not all in the DCEU have gone scot-free after one (or more) scandals.

Take Miller’s former director Joss Whedon, who not only co-wrote the original Justice League screenplay, but also helmed all of its post-production after Snyder stepped down following the death of his daughter.

Soon after Whedon’s version of Justice League dropped in theaters in 2018, Whedon faced numerous allegations of workplace harassment and abuse from DCEU stars like Gal Gadot and Ray Fisher, as well as the cast and crew of Buffy the Vampire Slayer and Angel.

Fisher, who played Cyborg in Justice League, called Whedon’s on-set behavior “gross” and “unprofessional,” and Gadot claimed that Whedon had threatened her career. After an internal misconduct investigation by WarnerMedia, as well as a revelatory New York Magazine profile on Whedon in which the filmmaker made concerning statements about feeling “powerless” near attractive female actors, Whedon was booted from his own creation, HBO’s The Nevers.

The Inverse analysis — In Miller’s case, known misconduct incidents in 2011, 2020, and January 2022 never barred the actor from memorable leading roles, but these dangerous encounters in Hawaii are more serious allegations. It’s possible that Warner Bros. will inflict a punishment similar to what Whedon faced.

But because The Flash is a major DC release that already finished filming in 2021, odds are that Miller will blow past this bout of bad publicity and wind-up speed-eating hot dogs on the big screen in 2023. As far as what their fate will be in the DCEU after this first Flash flick debuts, it’s possible to re-cast Miller and shrug the star swap off as another alternate version of Barry Allen in subsequent standalone or team-up movies.

We’ll just have to wait and see, but maybe the golden boots could use a new, non-violent owner.