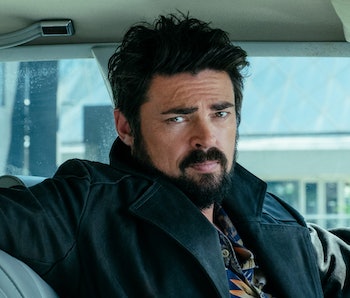 This article about Season 2 of the superhero series The Boys was originally published on November 7, 2019 and updated on October 30, 2021 following the release of the season on Prime Video. Read on for the original article, with some new changes to reflect the latest updates on this topic.

In a year where Captain America and The Avengers dominated at the box office, The Boys was the nihilistic breath of fresh air we didn’t know we needed. Based on the R-rated comics from Garth Ennis and Darick Robertson, Amazon’s original superhero series followed a group of blue-collar freedom fighters as they attempted to take down a gang of secretly evil superheroes known to the world as The Seven (imagine if the Justice League were all addicted to drugs, sex, and murder).

The Boys Season 1 served as an origin story for the good guys. The group reunited and added new members while uncovering The Seven’s worst secrets, including a secret program that turned babies into superheroes. Season 2 continued to push the story forward as the Boys went into hiding from Vought (the multinational corporation that controls The Seven). At the same time, the evil superhero team added a questionable new member: Stormfront.

Here’s everything you need to know about Season 2 of The Boys, including release date, cast, and renewal.

When was The Boys Season 2 release date?

The Boys Season 2 premiered on Prime Video on September 4, 2020. Amazon announced that the first three episodes would all be released at the same time. One episode per week dropped every Friday through October 9th.

How many episodes were in The Boys Season 2?

The Boys Season 2, like the previous season, ran for eight episodes. Each episode ran for about an hour.

Is there a trailer for The Boys Season 2?

Amazon also released a “first look clip” in June titled “I am Stormfront.” It opens on a commercial being shot featuring a U.S. soldier (actually an actor, it turns out) standing alongside the Seven’s too central heroes: Homelander (Anthony Starr) and Queen Maeve (Dominique McElligott). Then we’re introduced to the Seven’s newest member Stormfront (more on her in a bit), who the other heroes don’t seem too pleased to learn is joining the team.

And you can check out the full reunion video right here:

Amazon also released an official teaser trailer for The Boys Season 2 in December at CCXP 2019 in Brazil. The trailer picks up on the jaw-dropping cliffhanger finale of Season 1, with Homelander discovering he has a son. The trailer then cuts to a montage of familiar faces and teases what is next in the battle between the Vought-engineered superheroes and Billy Butcher and his team.

Which The Boys cast members returned for Season 2?

Spoilers ahead for The Boys Season 1!

Given how Season 1 ended, a majority of the cast of The Boys returned. This includes:

Additionally, characters that appeared in a guest capacity in Season 1 returned for a more recurring capacity in Season 2. That includes Giancarlo Esposito’s corrupt CEO of Vought Stan Edgar, Shantel VanSanten as Billy’s estranged wife Becca Butcher, and Laila Robins as the founder of the Boys Grace Mallory.

Did any new characters come to The Boys Season 2?

In July 2019, Deadline reported You’re the Worst alum Aya Cash would join The Boys Season 2 as Stormfront. In the Ennis/Robertson comics, Stormfront is a male villain part of the supervillain group known as Payback, which operates in direct opposition to The Seven. Stormfront is also styled in the same vein as Marvel’s Thor or D.C. Comics’ Shazam. Just as his villain name implies, Stormfront was a member of the Hitler Youth, raised with white supremacist ideologies that are fundamental to his worldview.

This version of Stormfront has a similar origin but a different outcome. On the show, Klara Risinger is the first successful Compound V subject. She becomes a member of The Seven, causing a stir with her disregard for following P.R.’s rules and Homelander’s leadership style.

In September 2019, Deadline reported Goran Visnjic and Claudia Doumit, both alums of NBC’s Timeless, were joining the cast. Visnjic plays Alistair Adana, “the charismatic and shadowy leader of a mysterious church.” Doumit tackles the role of Victoria Neumann, “a young wunderkind congresswoman.”

Other new cast members include Langston Kerman (Eagle the Archer, a superhero who recruits the Deep to his Church of the Collective), Jessica Hecht (Carol Mannheim, Eagle’s archer and a therapist), and Abraham Lin (Kenji Miyashiro, Kuniko’s vagrant brother).

Was The Boys renewed for Season 3?

Yes! In July 2020, two months before Season 2 was released, Amazon renewed The Boys for Season 3. Filming began in early 2021, and there’s no set release date. But that’s not all! In September 2021, it was announced a spinoff to The Boys would also be produced. Set at America’s only college exclusively for young adult superheroes, it will be a young adult take on supes with all of the raunchiness from the show proper.

This article was originally published on November 7, 2019