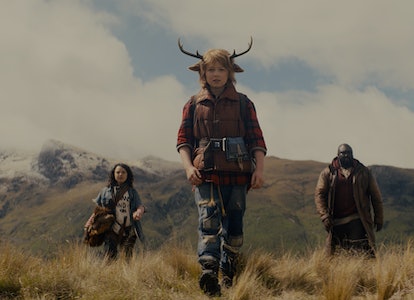 The end of the world isn't supposed to make you hungry. And yet, that's exactly where we are with Sweet Tooth.

A new Netflix drama based on the comic book series of the same name, Sweet Tooth is all about one precious young child working his way through a post-apocalyptic world with little more than a doe-eyed love for sweets guiding the way. Step aside, Stranger Things, Netflix subscribers are about to meet their new genre television obsession. Here's everything you need to know.

What is the plot of Sweet Tooth?

Based on Jeff Lemire's DC Comics comic book of the same name, Sweet Tooth takes place ten years after a global catastrophe all but destroys civilization. The story follows Gus, the titular "Sweet Tooth," a boy who is one part deer, one part human. He's a "hybrid," a part-animal human, feared and hated by the remnants of humanity.

As Sweet Tooth begins, Gus shirks aside a lifetime of sheltered existence to venture out into the world — discovering all the danger and chocolate bars that come along with it.

"We wanted to make a show that offers escape and adventure, where nature is reclaiming the world and in many ways it feels like a fairytale," executive producer and co-showrunner Jim Mickle says about the series. "Sweet Tooth is a new kind of dystopian story, it's very lush and hopeful. We want people to come into this world where there's beauty and hope and adventure. This is a sweeping story — we ride on trains, climb mountaintops, run through forests. This is a show about what makes a family, what home really means, and why it's important to keep faith in humanity."

Co-showrunner Beth Schwartz adds: "Sweet Tooth the series has been in the making since 2016, and the comics existed even well before that, but I think everyone is going to relate to the show and this story even more than we even thought when we first started working on it. When you watch Sweet Tooth, you feel hopeful about the future."

What is the Sweet Tooth release date?

The first season of Sweet Tooth arrives June 4 on Netflix.

How many episodes are in Sweet Tooth season 1?

There are eight episodes in the first season of Sweet Tooth.

Is there a Sweet Tooth trailer?

There is! Netflix released the trailer for the first season of Sweet Tooth on April 29, little more than a month ahead of the release date. It comes equipped with a hopeful tone that sets Sweet Tooth apart from other post-apocalyptic fare straight out of the gate, offering a glimpse of hope in what often feels like a hopeless time.

Who are the stars of Sweet Tooth?

The co-lead is Nonso Anozie of Game of Thrones fame, inhabiting the role of Tommy Jepperd, a grizzled survivor in the apocalyptic world of Sweet Tooth. Also along for the ride: Will Forte as Gus' father, no stranger to a TV apocalypse as the star of Last Man on Earth; here, he looks a bit more James Potter than usual.

Will there be a season 2 of Sweet Tooth?

One thing at a time. Let's get through season one first, shall we? But for those who are excited about diving into this world — especially those who finish the first season and crave more stories about Gus and Jeppard — Jeff Lemire's comics could not possibly come with a higher recommendation. The full series is available on Comixology for your reading pleasure.