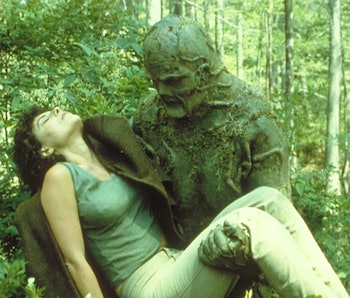 Comic book films used to be a risky business. In the late 1970s and early ‘80s, most characters from funny books were frowned upon by Hollywood studio heads — a far cry from the flood of Marvel and DC blockbusters crowding silver screens today.

Sure, there was Superman in 1978 and Superman II in 1980, but minor characters had almost no hope of getting a similar treatment. So it was seemingly out of thin air that a little film project based on Swamp Thing emerged. A lesser-known horror creature that first appeared in DC Comics’ House of Secrets #92, the marauding muck monster initially hit the pages in July of 1971 before morphing into its solo title in 1972.

Created by comics legends Len Wein and Bernie Wrightson, their unlikely hero was a biochemist named Alec Holland, whose experiments fusing plant cells with human DNA resulted in a glowing green substance that accidentally transformed the brilliant scientist into a hulking mass of verdant leaves and moss. Relentlessly pursued for his formula by the evil Anton Arcane, Holland’s Swamp Thing was an ecological guardian in the murky swamps of the Deep South.

The film was released on February 19, 1982, and starred Adrienne Barbeau, Louis Jourdan, and stuntman Dick Durock as the mutant beast. A moderate box office success despite being dumped into the doldrums of Hollywood’s calendar by Embassy Pictures, it spawned a revival of Swamp Thing comics written by Alan Moore, and even a cheesy, less-profitable 1989 sequel titled The Return of Swamp Thing.

With just a $2.5 million budget and a tight shooting schedule, a young director named Wes Craven took on the challenge of bringing Swamp Thing to the big screen. Craven had only directed a limited number of indie fright flicks like The Last House on the Left and The Hills Have Eyes; the fedora-wearing Freddy Krueger was still just a distant creative spark.

“We showed up on set one day and there was no makeup trailer because they hadn’t paid the bill.”

Fortified by a talented cast and a big green latex suit, Craven and his film crew invaded the murky marshes of Cypress Gardens near Monk’s Corner, South Carolina to shoot what would later become a campy cult classic that still holds a certain old-fashioned charm.

Adrienne Barbeau had already established herself as a sci-fi and horror queen following major roles in The Fog and Escape From New York. Swamp Thing remains one of her guilty pleasures despite the damp sets, flying insects, extreme hours, and spartan cast accommodations.

Inverse spoke with Barbeau in honor of Swamp Thing’s 40th birthday to learn about the making of this horror gem, her role as government agent and love interest Alice Cable, and why she believes the film holds up in an age of endless comic book movies bombarding the multiplexes.

Inverse: How did you wind up sloshing around in the South Carolina swamps?

Adrienne Barbeau: They sent me a really wonderful script. I just loved it and I thought it could be really good. Unfortunately, once we got on the set the studio started decimating the production and pulled the budget out from under Wes. So he was having to rewrite scenes and eliminate characters.

We showed up on set one day and there was no makeup trailer because they hadn’t paid the bill. Then the [financial supervisor] cast himself as one of the extras and he was there all the time saying we couldn’t spend money on this or that.

“The studio started decimating the production.”

The fact that it’s so successful is a real tribute to Wes because he took a silk purse that they turned into a sow’s ear and turned it back into a silk purse. It was not a fantastic experience compared to so many of the other films that I’ve done. It was really hard on Wes.

What was it like working with Wes Craven at that stage of his career?

I loved Wes Craven, but he had his hands full. I didn’t really get to socialize with him since we were working long hours. It was just get up and work until midnight. We were working 14 hours a day and the locale was hot and muggy and buggy. I trusted him completely and I was really happy with what he finally came out with.

I haven’t seen it since HBO showed a really dark version when it first came out. It was on HBO all the time and you could barely see it.

Your romantic scenes with Dick Durock as Swamp Thing are very touching. What was your chemistry like with him?

Dick was just a lovely man working under extremely difficult circumstances. Once they put him into that hot costume he was going eight or nine hours without being able to go to the restroom. The rubber suit was so cheaply made and it kept tearing and they’d have to fix it in the middle of a scene. That scene where I reach over and caress his face, I think it’s a charming moment.

“Eight or nine hours without being able to go to the restroom.”

Horror and comic book movies have never been bigger. What are your thoughts on the evolution of the genres?

I’m really not the best person to ask because I don’t like horror. I don’t watch it or see it at all. I don’t like to be scared. The only time I see anything is when I’m video captioning it for the blind. I do a lot of the Blumhouse movies and a lot of TV series for the blind. It’s not exactly duress, but it’s not by choice. I just did the original Cujo the other day. They’re pulling it out of the archives to put it up on new media.

I can say from the scripts that I’m offered, and maybe there’s a little more creativity and character development now, but there was a period there where we’re three pages in and they just killed five people in the most grotesque and horrendous ways you could imagine, and who cares? We don’t know these people, there’s no character development, and this is not something I want to be involved in.

I did go by choice to see A Quiet Place when we were celebrating one of my kid’s birthdays. I thought they did a great job with that. It was really an acting piece and not a slasher film. I’ve never seen any of those Freddys or Friday the 13ths or Saws. I’m the wrong person to ask.

What other creative projects do you have coming up in 2022?

I have another book coming out. This one is a collaboration, writing, and editing, for the 50th anniversary of Grease. We did a collection of stories from more than 100 of the actors that appeared in the original Broadway show [Barbeau played Rizzo] and then in the national touring company. That’s coming out June 8th and it’s called Grease: Tell Me More, Tell Me More.

Just a couple weeks ago I did a scene in another horror film called The Demon Detective, which I think is quite good. I did a bunch of stuff right before the pandemic too that’s just been released. Unearth with Marc Blucas and one called Hellblazers with Billy Zane and Bruce Dern. I’ve never followed one path in my career. Roles come along and if they’re right then I have fun doing them.