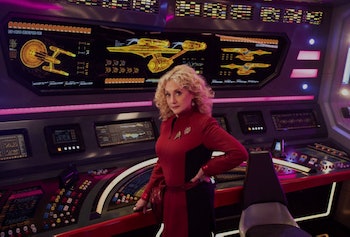 In Strange New Worlds Season 2, the crew of the Enterprise will be joined by a new character who will fill the post left absent by the biggest twist in Season 1. Here’s why the addition of Carol Kane to the cast creates a canonical mystery connected to The Original Series.

On Star Trek Day 2022, it was revealed that Kane — famous for her comedic roles in movies and television ranging from Scrooged to The Unbreakable Kimmy Schmidt — will join the crew of the USS Enterprise as an engineer named Pelia. Here’s how Paramount describes her:

“Highly educated and intelligent, this engineer suffers no fools. Pelia solves problems calmly and brusquely, thanks to her many years of experience.”

This isn’t the first time a new Star Trek series has cast a comedian in the role of a starship engineer. In Discovery Season 2, Tig Notaro joined the cast as Jett Reno, effectively making her the Scotty of that series. Will Carol Kane’s Pelia be the Scotty of Strange New Worlds? And where is Scotty anyway?

When will Scotty appear on Strange New Worlds?

In the Strange New Worlds Season 1 finale, we heard Scotty speak to Spock during a flashforward to an alternate future. At the time, Henry Alonso Myers told Inverse the show wasn’t “quite ready to cast our Scotty at that moment.”

Now, following the demise of Hemmer (Bruce Horak) in Strange New Worlds Season 1, it would appear that going into Season 2 the Enterprise will once again be without a Chief Engineer. It looks like Pelia will take that role. The social media accounts for StarTrek.com have described her as the “Chief Engineer” of the Enterprise. This makes Pelia the Chief Engineer in-between Hemmer and Scotty.

Because Strange New Worlds happens in 2259, there are roughly six years until The Original Series begins. If Pelia remains Chief Engineer until Scotty appears, then suddenly the history of the most famous starship in Trek will be completely different.

We know Scotty didn’t invent all the different quirks of the Enterprise; he just maintained the ship. But maybe someone else did establish those quirks, and Scotty had to learn a lot on the fly as he took the job not long before The Original Series began.

Although we didn’t get a release date for Strange New Worlds Season 2, Paramount did release a new clip. In it, Ortegas (Melissa Navia) is thrilled to finally go on an away mission, only to find out she’s going to have to stay and fly the Enterprise.

It’s an exciting and quirky look at the next season. So far, all we really know about Strange New Worlds Season 2 is that it will be a lot like Season 1. But, with a new engineer and new adventures on the horizon, that’s not a bad thing.