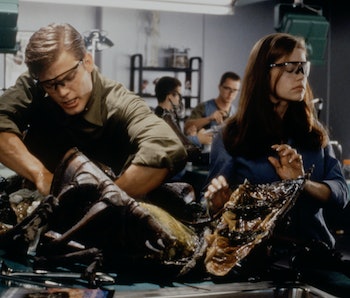 Because Paul Verhoeven’s 1997 masterpiece wasn’t marketed as satire in the U.S., it stands to reason that the vast majority of young people who saw the faux-fascist film in theaters were unaware of its satirical elements, or its commitment to camp.

From Casper Van Dien and Denise Richards’ overly-earnest performances to the fact that much of Starship Troopers intentionally feels like a recruitment film for an actual space military, the film almost never breaks its own camp spell — so much so that it almost certainly never be made today. The sci-fi romp leaves Netflix at the end of August. Here’s why you should watch it before that happens...

As asserted in her famous essay “Notes On Camp,” Susan Sontag believed that one way in which camp is effective is that “High Camp always has an underlying seriousness.” This is perhaps the handiest way to describe the difference between a spoof and a work of satire employing camp.

On the other hand, Starship Troopers — with its jingoist battle cries, absurd costumes, high school football touchdowns, and cartoonish violence — is camp. If you’re not sure about this, please rewatch these scene in which Johnny and Zander (Patrick Muldoon) get into a fistfight while Mazzy Star’s “Fade Into You” plays prominently as pseudo-diegetic music. Director Paul Verhoeven perhaps put it best when he said the movie was “an idiotic story, young people go to fight bugs, so I felt the human characters should have a comic-book look.”

The point of this scene — that Johnny and Zander are fighting over Carmen, even though they’re pretending to be mad about defending the honor of their respective branches of the military: Fleet (Navy) versus Mobile Infantry (Army) — is on the surface. But, as Zander drives an elbow into Johnny’s chest, there’s also a creepy Orwellian face on a poster just above them, as though a bargain basement version of “Big Brother” from 1984 just exists in the basic world of Starship Troopers at all times.

This isn’t an accident. The repressions and class warfare that pervade the humans in Starship Troopers are slyly presented as a status quo, rather than something we should be worried about. The beginning of the film blithely asserts that it’s okay if only people who have had military service are allowed to vote.

What Zander, Johnny, Dizzy (Dina Meyer), and the rest are fighting for is, essentially to preserve their way of life, which is pseudo-fascist. When Johnny briefly quits the Mobile Infantry, earlier in the film, he’s also giving up his chance of “being a citizen.” War, it seems, is the only way for him to become a complete person.

It’s in these moments that make you wonder if Starship Troopers could ever be made today. Just the status quo of the world-building could be misunderstood as offensive. That’s arguably still true, and only an argument of stated intent lets Starship Troopers off the hook for employing fascist imagery as things we associate with “the good guys.” In other words: if Starship Troopers was really satire, but high school kids in 1997 didn’t know that, was it really satire?

Artistically, the answer is yes. The high camp of Starship Troopers is so consistent and prevalent throughout the film that it’s impossible for any reasonable person to not get a whiff of the subversive elements. Again, what’s absurd about the movie is what’s serious about the movie. They’re not separate, they’re intertwined.

However, as much as contemporary self-styled sci-fi critics love to champion the artistic integrity of the movie, it didn’t prevent the film from being woefully misinterpreted by film critics of the time. The easiest way to attack Starship Troopers in 1997 was to accuse Paul Verhoeven of being a fascist himself. “We were accused by the Washington Post of being neo-Nazis! It was tremendously disappointing,” Verhoeven said. “They couldn't see that all I have done is ironically create a fascist utopia.”

The high camp of Starship Troopers wasn’t just serious. It was deadly serious. Verhoeven was able to bamboozle studio executives into thinking they were selling a military sci-fi action flick, which they were. But, really, he was putting a satirical, deeply anti-fascist film out into the world.

If you feel uncomfortable watching Starship Troopers, that’s largely the point. The viewer starts the film rooting for human soldiers of the Federation’s Mobile Infantry to kill the alien insects from Klendathu and they end the film feeling pretty much the same way. This basic emotion you might have about the plot is essentially unchanged, even when you’re aware the movie is satirical.

Today, it seems unlikely that a major studio would greenlight a project in which the stated goal was satire-that-pretends-its-not-satire. The entire gambit of Starship Troopers was the idea that it could be misunderstood. Verhoeven gambled on the idea that people were smart and would get the movie, and was proven wrong — even by smart people who should have known better.

For this reason, there’s no way a movie like Starship Troopers would be made now. Or, if it were, the subversive messaging might lose its teeth, simply because the intent might have been made clear from the beginning. Starship Troopers tricked young, dumb Americans back in 1997, partly because it was a subtle movie masquerading as an obvious one. We’ll never get something like it again.