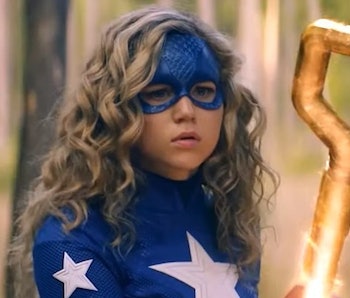 Almost all the great superhero movies and TV shows have an unusual thing in common: Heroes love food. In The Avengers the heroes bonded over shawarma, and in Endgame they hatched a plan to retrieve the Infinity Stones over Chinese take-out. In Logan, the nomadic Wolverine, Xavier, and Laura enjoyed one last moment of happiness over a home-cooked meal. In Justice League, the post-credits scene teased a brunch.

But Stargirl misses its opportunity for a fulfilling moment of its own. In the penultimate episode of an otherwise stellar first season, Stargirl mysteriously avoids a much-needed moment of togetherness. Despite introducing "a feast for kings and queens" from the lovable Sir Justin, Stargirl never takes stock with its unique characters, a sorely needed moment before next week's epic finale.

In "Stars and S.T.R.I.P.E. Part One," the plan for the ISA's "New America" is revealed. They want to... fight global warming, end racism, and enact universal health care.

But they also want to forcefully change people's minds — specifically fully-developed adult minds — with Brainwave's psychic powers, which just got a huge boost from the Dragon King. Furthermore, the ISA enacting their plant would mean some 25 million people will die due to a biological natural resistance. Though the ISA clearly have agreeable goals, they want to do it forcibly, on their terms, at great cost.

So, it's time for the JSA to move. Unfortunately, Stargirl doesn't take a moment to breathe. Or eat. Despite the premise for the episode — our heroes retreating to a cozy AirBnB cabin to clear heads and formulate an attack plan — Stargirl doesn't take advantage of letting us sit with our favorite characters breaking bread. Though Justin (Mark Ashworth) humorously brings KFC (it is, as mentioned in a throwaway line, Thanksgiving season in the show's in-universe calendar) Stargirl zips by any moment of unity, sans masks.

All of these moments, however long, revealed to us all the unique quirks, tics, and behaviors of a specific character. More importantly, they showed us who our favorite characters are in the context of a greater whole. Watching heroes punch bad guys is predictably fun. But we don't always know them as characters that way, we do so when they've all got mouths full of chicken and potatoes. Though dinner scenes lack an opportunity for whiz-bang action (most of the time, anyway; see Avengers: Age of Ultron) they are just as essential to allow characters to shine as both individuals and as a unit (see, again, Age of Ultron).

Stargirl has yet to give us such a moment. It had the absolute perfect set-up for one, but never takes advantage in order to keep the plot moving. To hell with the plot! We already know the ISA are big and mean and have some great plan to unmake Blue Valley. I want to see who Beth is when she's not relying on McNider's artificial intelligence. I want to know Rick beyond his brooding. I want to know more about Yolanda and her guilt over Henry. I want to know what life Courtney sees for herself when their mission is finally over.

Though Stargirl spent an episode-ish introducing every one of the JSA heroes as they joined the team, we've hardly seen them actually be together, save for the occasional exposition dump in the cafeteria. As our heroes head towards a big showdown in next week's season finale, it would have been ineffably invaluable to know what their hopes, dreams, and fears are as danger looms large. All we can do know is hope they all make it to the end to enjoy a plate of shawarma themselves.

Stargirl airs Sundays on DC Universe at Tuesdays at 8 p.m. Eastern on The CW.