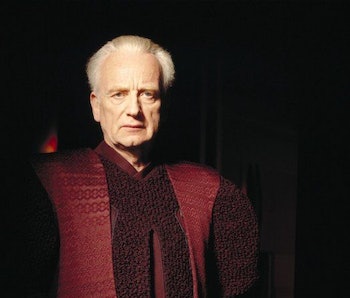 Sheev Palpatine was a Sith Lord, an Emperor, and the Senate. But above all else, he was a man who appreciated the finer things. He went to the ballet, wore fabulous robes, and presents an air of culture and refinement. That's why it makes so much sense his office was smartly decorated with impeccably chosen furniture and art. However, there's more to that art than meets the eye.

An entire wall of Sheev's luxurious office consisted of a multi-paneled stone mural depicting some kind of battle. The game Star Wars Galaxies reveals it's a bas-relief that depicts the Great Hyperspace War, a long-ago conflict between the predecessors of the Jedi and Sith.

Bas-relief is quite uncommon in the Star Wars universe but often seen in our own ancient world: Roman sculptures, like the Elgin Marbles, are done in the same style. Palpatine's use of it in his office was more or less neutral, as any visiting Jedi would take it as a nod to the foundation of the order, not knowing Palpatine was instead honoring his own Sith forefathers.

Unfortunately, Palps couldn't leave well enough alone. He used that frieze as the centerpiece for an entire Sith-themed room: deep red walls, mood lighting to keep it dark, and sparse furniture. It's quite the departure from the bright and airy decor Jedi Council room, which is seen as bright and airy.

Also in Palpatine's office were bronzium statues of the Four Sages of Dwartii, ancient philosophers whose history, at least in the non-canonical Star Wars texts, is shrouded in controversy and Sith elements. To finish it off, a Sith chalice, usually used as a sort of incense burner in Sith rituals, was on open display for anyone to see.

Why would Palpatine do this? Well, from a political point of view, it could work as a counter-intuitive cover story. If someone were to discover him reading an ancient Sith text or stumble across his lightsaber, he could easily defend himself as just an "avid collector" of Sith memorabilia. He's not a Sith lord, he just really appreciates the history.

That's the beauty of hiding things in plain sight: everyone dismisses it. Why would someone decorate their office with a Sith theme if they were secretly a Sith? Surely they'd want to hide that fact away and look like the most anti-Sith person possible! Palpatine knew exactly how to keep his secret — and how to interior decorate a sleek, if conspicuously sinister, office.