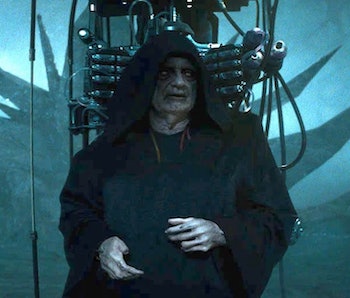 The biggest surprise in Star Wars: The Last Jedi was the reveal that Luke Skywalker came very close to killing his nephew, Ben Solo. The moment was arguably uncharacteristic of Luke, but the damage was irrevocably done. The pivotal moment paved the way for Ben to leave the Jedi Order behind, change his name to Kylo Ren, and align himself with the Dark side and the First Order. However, a clever fan theory suggests Luke’s actions were influenced by none other than Emperor Palpatine.

Reddit user JoelSmith716 argues the glorious and unrepentant mastermind known as Sheev Palpatine manipulated Luke's suspicions about his nephew's dark inclinations in The Last Jedi. Luke wasn’t afraid of Kylo’s powers so much as he was secretly being influenced by Palpatine, who was “amplifying” the Jedi’s concerns about Kylo and guiding him so that his actions pushed Kylo away.

The incident set off Luke’s exile to Ahch-To and ended his Jedi academy, both good outcomes for Sheev. If Palpatine was indeed whispering in Luke’s ears somehow, his plans for Kylo in The Rise of Skywalker become that much more important to the overarching story. It would also have helped to explain Palpy's sudden reappearance in Episode IX.

It’s possible Palpatine’s influence over Luke triggered the disturbance in the Force that referenced in The Rise of Skywalker. In the film, we learn Luke and Lando Calrissian went on a mission to Pasaana in search of Ochi, the Sith assassin who killed Rey’s parents. Ochi was a Jedi hunter, and Luke wanted the Sith Dagger for his Jedi studies, essentially. We never get definitive evidence Luke knew Palpatine was still around, but he clearly suspected something was afoot with the Dark side of the Force. As Rey notes on Ahch-To, Luke closed himself off from the Force, which may partly explain why he didn't pick up any Palpatine vibes in The Last Jedi.

It makes sense Luke would sense something was off and go looking for the culprit. Perhaps it’s what Palpatine even wanted all along, knowing that Luke would largely abandon the Force and stay under the radar. The theory deepens the connection between The Last Jedi and Rise of Skywalker, which approached Star Wars from two distinctly different points of view.

It’s still hard to buy that everything that happened in the sequels was simply Palpatine’s doing, but the evidence surrounding Luke’s actions is pretty sound in this instance.

The Rise of Skywalker and The Last Jedi are streaming on Disney+.