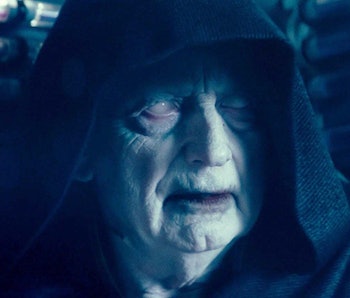 Star Wars and clones go together hand in genetically-identical hand. From the first time Obi-Wan mentioned the Clone Wars to Luke in A New Hope, the technology has been a part of the Star Wars universe for decades. Cloning only got more screentime, as the prequels documented the wars, and the sequel trilogy introduced us to a cloned Palpatine.

But the success of the cloning technology is debatable at best, especially when it comes to Palpatine’s role in the sequels. One reason for that could be buried deep in Star Wars history.

Redditor jedimasterashla suggests that Palpatine acted so out of character in the sequel trilogy because he was never Palpatine, to begin with. Instead, this theory posits that who we saw in The Rise of Skywalker was actually a clone with the life essence of Palpatine.

That would explain why some of his reactions didn’t make sense. For example, he didn’t realize that Force lightning could be reflected onto him because he lacked the experience and knowledge to realize that.

If this sounds familiar to any old-school Star Wars fans, it’s probably because it’s very similar to the lore established in Timothy Zahn’s Legends novel Heir to the Empire, which introduced Joruus C’Baoth to the Star Wars universe. Joruus was a clone of the Jedi Jorus C’Baoth, but the cloning failed, and he lost all of his sanity, leading him to become the “mad scientist” henchman to Grand Admiral Thrawn.

The Rise of Skywalker novelization also established that a clone could only have Force sensitivity if the body were deformed. But it does not mention if the mind is at risk of damage, too, which might not be initially apparent. Therefore, it’s possible the “new” Palpatine was respected as the original, without any concern for his sanity.

It may seem like a cop-out, but this could fix all sorts of problems with Star Wars today. Not only does it provide a blanket excuse for all the complaints fans had with Palpatine originally, but this could also explain the addition of Joruus in future Star Wars projects. It would make sense, considering Thrawn is all but confirmed to appear in Ahsoka after she demanded to know where he was in her brief Mandalorian appearance.

The Inverse Analysis — Unlike many other fan theories, this one doesn’t require canon confirmation to work. Anyone can choose to believe this theory to explain Palpatine’s weird behavior and make the sequels all the better. However, if Lucasfilm decides to make this canon, it could open the door to one of the most exciting — and controversial — clones in the Star Wars universe.

Star Wars: The Rise of Skywalker is now streaming on Disney+.