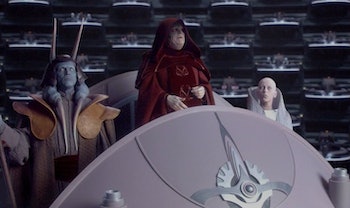 Was Emperor Palpatine a popular leader? While it might be clear to Obi-Wan Kenobi and the leaders of the Rebel Alliance that Palpatine was evil, how did that shake out in the day-to-day governance of the Star Wars galaxy? In Andor Episode 7, Palpatine is discussed several times, and it seems like Star Wars is getting ready to explain one missing piece of the Palps puzzle: How did he maintain control while clearly being a wicked wizard? Spoilers ahead.

In Andor Episode 7, “Announcement,” Wullf Yularen addresses the Imperial Security Bureau and mentions he’s just spoken to “Emperor Palpatine.” Following the massive robbery on Aldhani, things are about to get hardcore in the Senate. We know that by A New Hope, Palpatine has dissolved the entire Imperial Senate, but at this point, five years prior, he’s starting to introduce new legislation that massively expands the Empire’s power.

Interestingly, the plot of Andor Episode 7 suggests the Rebel heist on Aldhani has actually allowed Palpatine to take these extreme steps. But what was the perception of Palpatine in the Senate? What does the average senator (and their constituents) think of Palpatine at this point in history?

At the end of Revenge of the Sith, Palpatine’s public image is that of a long-suffering proponent of peace who’s saddened by the “betrayal” of the Jedi. By the time of the classic trilogy, 19 years later, he's basically a military leader, someone who oversees his lackeys as they build superweapons Stars and recruit Stormtroopers. In A New Hope, Tarkin says the “regional governors” in the Empire have “direct control” over their systems, which implies the Emperor isn’t doing much actual governance during the classic trilogy.

But what kind of administration does Palpatine run before then? The short answer seems simple: Palps is gradually transforming the illusion of democracy into an authoritarian dictatorship. But at what point does he just become overtly evil? And does the average citizen of the Empire care?

In its quest for realism, Andor is breaking down all the logistics of how the Rebellion operates and what makes the bureaucracy of the Empire tick. This is pretty much the opposite of the broad strokes we saw in the classic trilogy, and so far it seems to be making all of those classic machinations much more explicable. It’s great, but it also means that Andor is kind of like the Excel spreadsheet that covers all the finances of Star Wars; here’s how the Rebellion afforded these X-wings, assuming Mon Mothma gets this very specific loan!

This push toward realism is somewhat new for Star Wars, but it does raise the question of how the Emperor maintained control before the reveal of the Death Star. When people speak about Palpatine in Andor, there’s neutrality in their tone. It’s not that everyone fears him, or that everyone hates him. He just exists. Politically, this makes it seem like Palpatine didn’t present himself as a ruthless demagogue, but instead as a somewhat milquetoast leader pretending that he’s always just reacting to events rather than actively ruling with terror.

The Rebellion made Palpatine worse

What’s interesting about all this is the idea that the Galactic Civil War was perhaps started by the Rebellion, in a way that has strange implications. Based on what seems to be widespread indifference about the Emperor, it’s possible the average citizen of the Empire didn’t care that Palpatine was an evil Sith Lord. Second, and more interestingly, Andor also makes it seem like the Rebellion made Palpatine worse.

As the conversation between Kleya (Elizabeth Dulau) and Vel (Faye Marsay) in Episode 7 makes clear, if Luthen (Stellan Skarsgård) hadn’t pushed for the big heist on Aldhani, then it’s almost certain that Palpatine wouldn’t have had the political capital to make the Empire even more repressive. This isn’t to say that life under Palpatine was good, but the Rebellion’s insurgency sped up the rate at which Palpatine could reveal just how evil he really was.

All of this could mean that Andor is speeding toward an actual Palpatine cameo, featuring Ian McDiarmid himself. But if Palps does appear in Andor, it’s likely he won’t behave the way he did in Obi-Wan Kenobi. Instead, we could see a side of him we’ve never witnessed before.

Andor is currently streaming on Disney+.