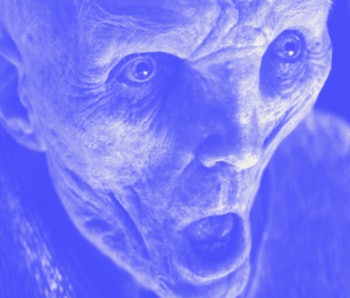 For years now, Snoke has been the shadowiest Sith Lord in the Star Wars galaxy. Even after Rise of Skywalker attempted to offer some closure, plenty of questions remain. Is Snoke his own person? Is he a clone of Moff Tarkin? Maybe he's actually Mace Windu?

While the movie leaves his identity in the shadows, a new Star Wars book leak revealed not who Snoke is, but why he is.

The upcoming Star Wars reference book The Star Wars Book: Expand Your Knowledge of a Galaxy Far, Far Away is still a week from release in the US, but British Star Wars fans were able to buy it as early as October 1. Because of this, Twitter user Old Man Blinks was able to provide glimpses of a few choice pages of the DK encyclopedia, including one focused on Snoke.

At first glance, it doesn't seem to reveal much. The entry keeps Snoke's origins mysterious, only saying "scant details exist regarding his origins." It then reveals he's a strandcast, much like Rey's dad. That's not too surprising, considering we see the copies of Snoke in vats in Rise of Skywalker. The "strandcast" name was originally introduced in The Mandalorian, but this book is the first time the name has been used in canon to refer to Snoke.

The most interesting part of the entry, however, refers to how Snoke met his bitter end:

Through Snoke, Sidious sidesteps the tradition of a dark-side apprentice slaying his master to ascend, which happens when Kylo Ren betrays Snoke and slices him in two.

The "tradition" of course is the Sith Rule of Two, a doctrine put in place by Darth Bane which limits the number of Sith in the galaxy at any time to two. The purpose of the Rule of Two is to keep the Sith a secret from the Jedi and the Republic, and it's enforced by having each Sith apprentice kill the Sith Lord who trained them before choosing a pupil of their own.

Palpatine knows the Rule of Two all too well. He killed his own former master Darth Plagueis, and he supposedly died at the hands of his apprentice Darth Vader — until Rise of Skywalker retconned that story. Palps also seems to embrace the Rule of Two in that movie when he encourages Rey to kill him, while at the same time adding a new wrinkle by revealing that if she does, her body will become a vessel for every Sith that came before her.

However, it turns out Palps also used Snoke as a loophole in the Rule of Two when he turned Kylo Ren/Ben Solo to the Dark side. Not only did Palpatine influence Kylo by putting voices in his head, but he also gave the young Sith a master to strike down. In other words, Palps used Snoke as a literal puppet leader in order to mentor and turn young Ben Solo without technically being his master.

The Inverse Analysis — Snoke is a puppet leader, that's one of the few things we know about him for sure. However, his use as a human shield puts a whole new spin on the character altogether. Palpatine wasn't hiding his decrepit clone face out of cowardice, but out of respect for one of the oldest Sith traditions. That respect only goes so far though — if there's an evil loophole to be exploited, Palps will exploit it.