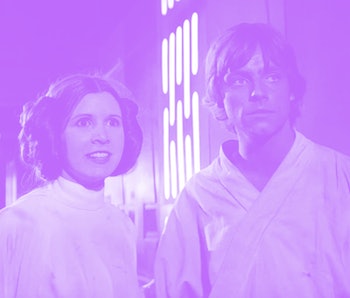 The scene where Princess Leia Organa kisses Luke Skywalker on the mouth in Star Wars: The Empire Strikes Back was the most iconic onscreen incest until Jaime and Cersei Lannister. Of course, any romantic feelings between the pair disappeared completely in Return of the Jedi, which turned Luke and Leia from potential lovers to siblings in one fell swoop. It was a soft retcon that effectively erased any and all drama the love triangle between Luke, Leia, and Han might have presented.

Fans have dismissed this as an act of poor judgment, primarily because the characters obviously didn’t know that they were estranged siblings at the time. However, there’s a lot of history behind the kiss, how it came to be, and why Luke and Leia’s budding relationship was halted before it ever really began.

5. Love triangles and awkwardness — The Empire Strikes Back wasn’t the first inkling that Luke and Leia had feelings for each other. Their romance was heavily alluded to in A New Hope, what with all of Luke’s suggestive facial expressions to Han whenever Leia was around, and Han’s clear attraction to Leia. It didn’t really help that she was also the only woman around in the original trilogy — an issue the recent sequel trilogy mostly failed to correct.

But things really heated up between Leia and Luke in Empire Strikes Back. Following the Wampa attack during the movie's opening scenes on Hoth; Leia, Han, and Chewie visit Luke in the infirmary. Leia is annoyed with Han, who insists she has feelings for him, so she kisses Luke to prove she doesn’t.

Presumably, the scene was simply meant to make Han jealous. Still, Luke looked very thrilled by this unexpected turn of events and Leia seemed to consider both men romantically, though the sexual tension with Han was admittedly much more palpable. (It probablydidn't hurt that they were hooking up offscreen.)

4. Early drafts included a lot more declarations of love — In retrospect, the kiss was incestuous and more than a little misguided considering the reveal in Return of the Jedi. However, Leigh Brackett (credited with writing the first draft of Empire Strikes Back) included a lot more romance between the pair, and it's the first clue that their relationship was never meant to be connected by blood.

In fact, the love triangle between Leia, Luke, and Han was a lot more heavy-handed in the original script, which even included a scene where Leia tells Luke she loves him, but he says she’s better off with Han. A revised version of the draft also included a scene where Luke declares his love for Leia and he goes in for a kiss, but is interrupted by Han. Interestingly enough, a scene between Darth Vader and Luke was written that included the reveal that Luke did indeed have a sister, who was to be introduced in another trilogy. That said, her name was definitely not Leia.

3. A deleted scene from Episode V reveals more sexual tension — When Disney+ launched in November 2019, the original trilogy became available to stream in 4K, a previously unreleased deleted scene revealed another key moment between Luke and Leia. The scene, which is set right before the infirmary scene from Episode V, sees Luke attempting to tell Leia that he has feelings for her. They both lean forward to kiss, but they’re interrupted by the arrival of R2-D2 and C-3PO. This scene seems to have been only slightly tweaked from the earlier drafts and definitely adds more context to their actual onscreen kiss.

2. Pre-Return of the Jedi comics involved more smooching — The Marvel Star Wars comics of yore capitalized on the Luke and Leia romance. Star Wars #25 by Archie Goodwin, Carmine Infantino, and Bob Wiacek included a kiss between the now-siblings that occurs after Luke flies their ship out of some space mines.

“Thanks, Flyboy!” Leia says before giving him a thank you kiss on the mouth. How very not sibling-like.

This particular comic book started before Empire Strikes Back, but the lovey-dovey vibes between Luke and Leia carry into comic books written after Episode V too. In later comic book issues, Leia is clearly jealous of Luke and a woman named Shira. Although Leia had admitted her interest in Han by then, she was still “confused” by her obvious feelings for Luke and didn’t much like seeing him with someone else.

1. Not even George Lucas knew what he was doing — While Return of the Jedi pulled the rug out from under fans by revealing that Luke and Leia were both Darth Vader’s children, the underlying romantic tension still existed. This is exemplified in the scene where Han tells Leia that he understands if she loves and wants to be with Luke instead of him. However, the only way they can finally move forward as a couple is because Leia reveals that Luke’s her brother.

The question among fans since then has been whether Star Wars creator George Lucas knew that Luke and Leia were twins when producing The Empire Strikes Back. He’s never openly discussed the topic, perhaps to further the impression that the Star Wars universe was planned well in advance of the film’s debut.

However, the draft, deleted scene, and the comics seem to corroborate the idea that the love triangle was never meant to be scrapped, but may have actually been discarded for plot convenience later on. Luke needed to have a sister and Leia, being the only prominent woman in the original trilogy, seemed to fill that narrative space.

Whether or not Lucas ever intended them to be siblings is unclear and unconfirmed. That said, Luke and Leia’s kiss is a perplexing and oft-ignored smudge on the history of Empire Strikes Back, but only within the context of Return of the Jedi’s retcon.

Take it or leave it, the kiss itself will forever remain.