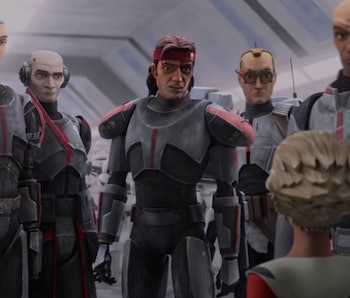 Star Wars may have its first trans character.

For 44 years, LGBT+ representation within the franchise has been limited to spinoff comics and a same-sex kiss in the background of The Rise of Skywalker. But the newest Star Wars show could finally give the franchise its first true LGBT+ representation. In The Bad Batch, an animated series about a team of “mutated” clone troopers which premiered May 4 on Disney+, one new character could redefine this galaxy in unexpected ways.

Is Omega a trans clone? One episode in, the Bad Batch’s latest member is already sparking an exciting new Star Wars debate.

So if she’s a clone, maybe part of her “enhancement” is the fact she’s a girl. Because her “source” as a clone is likely male, this would technically make her transgender. It may not be the same definition of the term we encounter here on Earth, but on Kamino, if a clone is intended to be identical to a cisgender male and is later shown presenting as female, that’s enough to be considered trans representation.

While it’s not clear who exactly Omega is a clone of, the leading options are all male. There’s the obvious pick in Jango, along with a few dark horse candidates including Palpatine, Count Dooku, Obi-Wan Kenobi. If any of these characters are revealed to be the source of Omega’s DNA, it still means her gender got changed up somewhere along the way and she now presents as female.

A trans character being featured in The Bad Batch would also have huge implications for the future of the franchise. If clones have the ability to genderswap through a mutation, there could be female Palpatine clones wandering the universe much like Rey’s dad. It’s unlikely we’ll see any of them on screen, but the effects are wide-reaching.

There’s also the possibility that Omega was genetically engineered to be female, and it wasn’t just a mutation like the Bad Batch. If the Empire has the technology to create clones on the other end of the gender spectrum, there could be opportunities for, say, Rey to somehow clone a daughter using Kylo’s DNA, or ex-clone trooper Captain Rex to train a squad of female clone troopers like a Star Wars Dora Milaje.

Introducing a trans character through cloning also threads a tricky needle for Lucasfilm’s storytelling. While this would technically make Omega a trans character, it wouldn’t pose an issue in terms of having a cisgender actress provide her voice or image, should Omega make the jump to live-action. Basically, if Omega is trans, she transitioned as a fetus.

“Finally, some official LGBTQ rep aside from a measly one-second kiss at the tail end of a nine movie long saga,” Gallagher says, referring to the Rise of Skywalker moment.

While there has been LGBT+ representation in Star Wars, it has been mainly been contained to the comics and books with characters like Doctor Aphra. Onscreen representation is a whole new frontier. However, Gallagher isn’t thrilled with one aspect of Omega’s character.

“I was disappointed big time the creatives went with the gender binary route,” they say. “They said girl and my heart dropped. They had a huge chance to make Omega non-binary and blew it.”

Still, any representation is worth celebrating. “Everyone watching this can learn and trans folx can be heard and see that our existence is valid, because the way it seems, we don’t.”

So is Omega trans?

It depends on who she was cloned from and how you define “trans,” but it seems increasingly likely that this is the perfect character for the Star Wars universe in 2021. She’s definitely hiding a backstory we’ll see in later episodes, as Bad Batch head writer Jennifer Corbett tells Inverse.

“Who Omega is and how her backstory is relevant to the series is something that we definitely explore,” Corbett.

No matter if Omega is trans or not, her story will at least mirror LGBTQ experiences in her own way. As a child who always felt different in her upbringing and then hitches a ride with a found family of four people just like her, Omega exemplifies the othering and belonging so many LGBTQ people face. Even if the representation isn’t canon, it’s there for those who need it.

If Omega is confirmed to be transgender, Gallagher has some words for those who don’t think there’s room in the Star Wars television galaxy for trans people, be they clones, humans, or aliens.

“If the acknowledgement of a group of people bothers you, get some help,” they say. “The Force is with us and welcomes everyone.”

The Bad Batch is now streaming on Disney+.