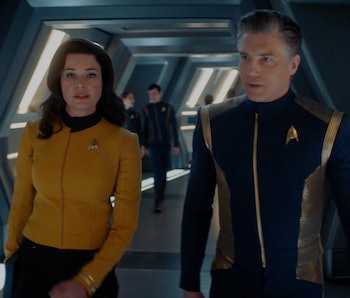 In many ways, the technology used by Starfleet in the first episode of Star Trek: Discovery seems a little too advanced for its place in the Star Trek timeline.

A significant Trek retcon is on its way, thanks to information gleaned from a new book about one of the best shows in the franchise — and the ramifications spell out something extremely cool about Star Trek: Strange New Worlds protagonist Christopher Pike. Mild spoilers ahead for Discovery Season 2.

Here’s the quick version: When the Captain Pike and Spock series Strange New Worlds debuts, this classic Trek prequel will fully honor one piece of technological retcon: the USS Enterprise under Pike will not feature any holographic technology.

Why is this important, and what does it mean? Let us engage.

The 1960s faux future-tech of the classic Star Trek is, in some ways, still on the bleeding edge of what is possible on Earth in the 21st Century. Sure, the classic flip-up communicator used by Kirk, Spock, and even Micahel Burnham might seem a little silly in a post-cell phone world, but then again, our cell phones can’t call starships traveling faster than light, nor can they instantly decipher alien languages.

The balance between Star Trek’s fictional technology with the aesthetics of said technology in real life is its own can of Klingon space worms. But, what about when Star Trek contradicts its own rules? Arguably, this happened in Discovery Season 1 when we see Federation ships use holographic projection technology — extensively, at least.

The trouble is, in the pre-established canon, holographic projectors were still considered fairly new tech in 2373, around the timeframe of the USS Defiant and Deep Space Nine. Essentially, it took 120 years for Starfleet to get around to dusting off those holographic projects again.

While Pike is the acting captain of the USS Discovery in Season 2, he gets a visit from Number One in episode 4, “An Obol for Charon.” In that episode, Number One tells him that the existence of the holographic projectors was at least partially responsible for why the Enterprise lost all power.

Basically, the holos are buggy, and Pike hates the new-fangled tech. He orders it removed from the Enterprise. Keep in mind, we don’t actually get any footage of people breaking holographic projectors on purpose, but the implication from this scene is that Pike causes Starfleet to throttle-back some fancy tech in favor of older, more streamlined, more reliable tech.

How Deep Space Nine fits in

In Deep Space Nine, the USS Defiant was outfitted with a holographic projector. And now, a new book called Star Trek: Deep Space Nine: The Illustrated Handbook has glued together these two pieces of a hologram puzzle into some fairly cohesive new Trek canon.

According to the book, after Pike has the holographic tech “ripped out” of the Enterprise, “Other captains soon followed his example, and for more than 100 years Starfleet regarded them as an unnecessary luxury that wasn’t worth the bother.”

The book goes on to say that in 2373, the USS Defiant was retrofitted with an “experimental system” that brought back holographic tech to Starfleet.

The book goes on to point out that holographic projections were pretty common by the 24th century and that both Data and Picard used holographic interfaces in briefing rooms. Voyager, and later Picard, introduced holographic characters, but most of the ships are still using old-fashion flat viewscreens. By Discovery Season 3, and a time travel leap to 3188, holographic communication is very much back. But, the pro-flatscreen bias created by Captain Pike seems to have been pervasive as hell.

That’s the bottom line, actually. As this new DS9 book briefly points out, Captain Pike was such a badass that he got everyone to throw away their holo-projectors and then create a tradition of not-caring about the tech that lasted for a hundred years. Captain Kirk might be cool, but it seems like Pike was the slickest trendsetter in Starfleet history.