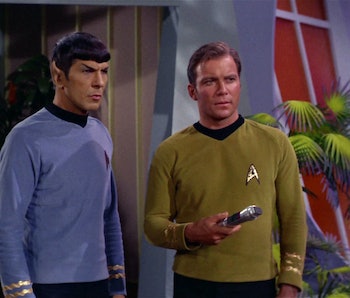 Why do aliens in Star Trek all speak English? The answer is simple: They don’t, we just hear English because of an innocuous piece of sci-fi tech that pervades the entirety of Trek canon, the universal translator. Even when we don’t see it happening, Trek’s slick translation tool lets everyone talk to each other with very few hiccups. Or does it? In the latest Star Trek: Discovery episode, “The Galactic Barrier,” Kovich points out that this near-magical technology has one fatal flaw: Confirmation bias. Here’s why Star Trek just posited that the real final frontier might be extra-galactic communication.

The cold-open for the episode finds the mysterious Dr. Kovich (David Cronenberg) lecturing Starfleet Command about the biggest problem they’re facing: A total inability to imagine what the enigmatic alien species “Ten-C” might be like. So far, most of Discovery Season 4 has been about figuring out and stopping the enormous and destructive spatial thingamabob known as the DMA, or Dark Matter Anomaly. Previously, Starfleet figured out that the DMA is actually a massive dredge mining a substance called boronite. The destructive nature of the DMA is just a side-effect of an outer space mining operation, but entire planets are being chipped away. So what does everyone in Discovery know about these aliens who built a super-destructive spatial anomaly only as a mining tool?

The short answer is nothing. In a move that’s somewhat new for Star Trek, the alien intelligence behind the DMA is extra-galactic, meaning it exists outside of the boundaries of the Milky Way. Yes, Trek has left the Milky Way before, but not as often as you might think. The vast majority of Trek aliens are from “our” galaxy. Kovich describes the problem like this:

“Whatever we think we know about Species Ten-C, we’re wrong. However we think first contact will go, it won’t.”

The representative from Earth, General Ndoye (Phumzile Sitole) questions Kovich, pointing out that all the translators present in the room are there to help everyone understand each other. Couldn’t the same tech help them understand Species Ten-C?

Kovich counters, saying, “[the translators] are here if you feel like translating confirmation bias from Federation standard into Klingon.” In this scene, we actually see nearly every version of Starfleet technology which might contain a universal translator, including several Starfleet combadges from different eras. Historically, all these gizmos are always acting as translators for nearly everyone within Star Trek. But Kovich gathered all these Easter eggs to prove a point. None of this stuff is going to cut it anymore.

Kovich’s colleague, Dr. Hirai (Hiro Kanagawa) explains why this is a huge problem.

“The reason the universal translator has been so successful is because we tend to look for and find what’s familiar to us. Species that communicate verbally, for example. Since we know nothing about the Ten-C, it’s naïve to assume the translator would even work!”

This is a big deal. With a few notable exceptions, Trek tends to take communication with extraterrestrials as a given. Other than moments in which the universal translator either breaks or fails to understand context it’s tech that mostly goes unnoticed. For storytelling purposes, most aliens are easy to understand.

But, with this episode of Discovery, Star Trek is pivoting towards a realistic approach to alien communication. Within Trek canon, part of the reason that aliens all tend to be “humanoid” (that is, look like humans in funny prosthetics) is that an ancient alien species “seeded” the galaxy with various versions of itself. As revealed in the TNG episode “The Chase,” Klingons, Humans, Vulcans, and many more share a common ancestor who influenced evolution on countless planets. But that explanation is limited to our galaxy. With “The Galactic Barrier,” Trek seems to be headed into different theoretical territory. What about aliens who aren’t part of that larger “family” of humanoids? How do we talk to them?

This has long been a serious question for science fiction authors and scholars. In fact, Dr. Kovich’s assertion about confirmation bias in Trek’s universal translator is very similar to something celebrated SF author Paul Park wrote in his essay on fictional aliens, “If Lions Could Speak.”

“The words we put into an alien mouth, the feeling into an alien heart, the tools into alien hands, what can they be but imitations of our words, feelings, [and] tools?”

Star Trek has gone here before, but not as often as you might think. Generally speaking, when Star Trek characters encounter non-humanoid aliens, those species tend to be either confused space animals (like the Horta or Gormagander) or super-advanced beings (like Q or The Prophets), the latter of which can generally figure out how to communicate with us.

In the beginning, Star Trek was created to portray “aliens” in a somewhat allegorical light. One of Gene Roddenberry’s first concepts was the notion that the crew would explore “parallel Earths,” not in a literal sense, but metaphorically. The idea that the classic Enterprise would mostly encounter aliens that looked like humans was a storytelling necessity, and the larger canon simply embraced the preponderance of human-looking aliens.

Again, there are exceptions to the verbal, humanoid alien species in Star Trek, but not many. And even when Trek has encountered alien intelligences beyond the ability of the universal translator, the shortcut is almost always telepathy. But what if telepathy isn’t an option either?

What’s great about this conversation in Discovery is that it gestures at something good science fiction always struggles with: How do we depict aliens without simply making them seem like humans from another planet? This could possibly push the interactions with species Ten-C closer to something like in the film Arrival rather than the sorts of stories Star Trek has told before.

The stakes with this Discovery episode are high. Perhaps, for the very first time, the Star Trek franchise could tackle alien life beyond the galaxy and depict it as something truly unimaginable. We tend to think of Star Trek’s aliens as being mirrors for ourselves, but what if Discovery is doing something new here? If the intent is to portray aliens as, well, alien, Trek may go where it’s never gone before.

Perhaps the boldest thing Discovery could do is have the crew encounter the Ten-C, but be totally unable to communicate with the species. Trek isn’t generally lauded for its realism, but if the Ten-C remains truly unreachable and mysterious, it could be the most realistic thing the franchise has done in years.

Star Trek: Disccovery has three episodes left in Season 4, which air on Thursdays on Paramount+. Here’s the breakdown of the Star Trek schedule for the rest of the year.