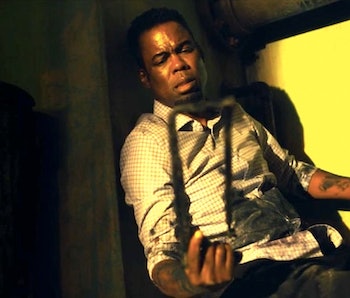 This article about the film Spiral: From the Book of Saw was originally published on February 5, 2020 and updated on July 11, 2021 following the movie's release. Read on for the original article, with some new changes to reflect the latest updates on this topic.

After nearly ten years and one forgettable prequel movie later, the iconic Saw series is slicing up something new... with Chris Rock? Yes, it's true. The Saturday Night Live alum and comedic actor is not only starring in a new sequel to Saw, but he also came up with the story based on his own self-professed fandom of the movies.

Here's everything we know about Spiral: From the Book of Saw.

Wait, what is this?

Chris Rock is starring in a new Saw movie, the ninth in the series going all the way back to the original movie from 2004. The movie is titled Spiral: From the Book of Saw and takes place in continuity with the other movies without being a direct sequel to any of them (including the last film, 2017's Jigsaw). So no reboots here.

When was the Saw: From the Book of Saw release date?

Spiral was released on May 14, 2021 in theaters. It was originally going to open in October 2019, but a July 2019 report from Variety revealed that studio Lionsgate pushed up Spiral based on "seeing early footage" and to avoid competition with Halloween Kills. The studio settled on a May 2020 date until the COVID-19 pandemic pushed things back yet again, as they wanted the horror sequel to be released in theaters.

So what's the plot of Spiral about?

Chris Rock stars in Spiral as a seasoned cop, Detective Ezekiel Banks, who is put in charge of an investigation into a series of grisly murders that echo a nightmare from the past. Max Minghella stars as Zeke's rookie partner, while Samuel L. Jackson stars as a hero cop whose shadow looms over Zeke.

A sadistic mastermind unleashes a twisted form of justice in SPIRAL, the terrifying new chapter from the book of SAW. Working in the shadow of an esteemed police veteran (Samuel L. Jackson), brash Detective Ezekiel “Zeke” Banks (Chris Rock) and his rookie partner (Max Minghella) take charge of a grisly investigation into murders that are eerily reminiscent of the city’s gruesome past. Unwittingly entrapped in a deepening mystery, Zeke finds himself at the center of the killer’s morbid game.

Is there a trailer for Spiral?

There is! You can watch it in the embed below.

How did Chris Rock get involved with Saw?

Rock then revealed his own interest in starring in a horror movie, a change of pace from his usual brand of adult comedies and family animated movies. He wanted to do horror for the same reason he agreed to Fargo, the acclaimed FX series based on the Coen Brothers movie.

“You wanna be interested in what you’re doing," he said. "I was like, ‘Fargo? That sounds great. That’s an adventure I haven’t been on. I’ve never done a television show before. Okay.’ And then, ‘A horror movie? I’ve never done that.’ Even without art, just in life, you wanna travel and see new things, you wanna meet new people, you wanna try new foods.”

Eventually, Lionsgate took a pitch from Rock on a new Saw movie, which intrigued the studio. Later, in the press release for Spiral, Lionsgate chairman Joe Drake said of Rock's pitch:

“When Chris Rock came to us and described in chilling detail his fantastic vision that reimagines and spins off the world of the notorious Jigsaw Killer, we were all-in ... Chris conceived this idea, and it will be completely reverential to the legacy of the material while reinvigorating the brand with his wit, creative vision and passion for this classic horror franchise.”

Rock professed his enjoyment of the movies since the original, saying: “I’ve been a fan of Saw since the first film in 2004. I am excited by the opportunity to take this to a really intense and twisted new place.”

So is it a comedy too?

That's what's so compelling about Spiral. Although it is being advertised as a straightforward horror movie, Chris Rock has said in interviews that the movie will include more elements of levity than even Saw fans might be used to.

“There are so many movies that I’ve watched and gone, ‘Three jokes would have made that movie a lot better.’ You know what I mean? A lot of times, you can get comedy in things, if it’s grounded, without it changing the movie, per se. Just like that story that Beverly Hills Cop was written for Sylvester Stallone. Eddie Murphy was hired at the last minute, and they made kind of the same movie, but it was grounded with just a little here, here and here. So, Saw is really scary and really bloody. It’s a Saw movie. But every now and then, you take a little air out. It’s gonna be good.”

“Chris wants to put his own spin on the Saw franchise in the way Eddie Murphy put a completely fresh perspective on buddy-cop films with 48 Hours. This new Saw is going to be an event film in the making for horror fans."

How did Spiral do at the box office?

Spiral has grossed $23.2 million in the United States and Canada, and $13.3 million in other territories, for a worldwide total of $36.5 million.

What did critics have to say about Spiral?

Spiral has a 37% rating on Rotten Tomatoes, a score of 40 on Metacritic, and a B- on CinemaScore. While critics were eager to see the horror franchise take a dip into a police thriller, many felt the plot itself was rote and generic.

This article was originally published on Feb. 5, 2020