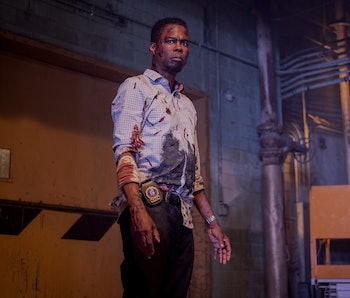 Spiral isn’t your typical Saw movie. Sure, there are disturbing torture devices and creepy puppets galore, but the new horror film from Chris Rock manages to achieve something this franchise hasn’t pulled off in years: a decent mystery.

The identity of “Jigsaw” remains a secret until the very end of Spiral. But if you already watched the movie and still have questions (or you just want to know how it ends and don’t care about spoilers) we’re here to help demystify the final twists in this new reading from the Book of Saw.

🌀Warning! Spiral: From the Book of Saw spoilers ahead!🌀

In the final scene of Spiral, we learn that the killer has been Zeke’s (Chris Rock) new rookie cop partner William (Max Minghella) all along. If you were paying attention this probably wasn’t a huge surprise, though the movie does at least make an effort to misdirect audiences.

William allegedly dies offscreen about two-thirds of the way through Spiral. However, unlike every other death in the film, we don’t get to see it happen (that’s clue #1 that something is amiss). We don’t see a face on the corpse either (that’s clue #2) since it's been completely deskinned. But when Jigsaw sends the cops a flab of severed skin displaying Will’s tattoo everyone accepts it as proof.

At the same time, Spiral makes an attempt to trick us into thinking that Zeke’s dad (a retired police chief played by Samuel L. Jackson) is the actual killer. This mostly hinges on the fact that Jackson is missing and not answering his phone for most of the movie — a bummer for fans of the actor hoping he’d get a meatier role. In the end, Jackson wasn’t the killer (though he was a crooked cop).

Spiral ending explained: Why was Will the killer?

As revealed in flashbacks during the final scene, it turns out Will is the son of an innocent man who was murdered by the police for trying to expose corruption in the department. As a child, Will watched his father’s death and hid from the cops to avoid retribution. He grew up determined to get revenge.

Will hopes to form an alliance with Zeke, who also witnessed that same murder and turned in his crooked cop partner. At the end of Spiral, it’s unclear if Zeke is willing to work with Will, but it seems unlikely. (Especially after Will kills Zeke’s dad.) However, both characters manage to survive, so anything is possible — assuming we get a sequel.

Spiral ending explained: Will we get Spiral 2?

The ending definitely sets up a sequel. Will escapes right after his final trap tricks the police into killing Samuel L. Jackon’s character. Chris Rock’s Zeke is also alive, and will likely want revenge on the new Jigsaw.

In an interview with ComicBook, Rock said he’s already “talking” to the studio about Spiral 2, though whether or not it happens depends on the box office for this one:

"We want this one to do well, so we don't want to get too ahead of ourselves, but, if this one does well, I could see myself doing this again," the actor admitted. "I could see ... I mean, I don't want to spoil the movie, but it's open ... another one wouldn't be out of the question."

And when asked if he’d rather revive another horror franchise instead, Rock responded that he’s more interested in continuing with Saw.

"I think Saw is the perfect one, honestly," Rock said. "I think the Saw franchise, especially what we set up in this one, especially Spiral, I think we can get a few out of this one."

Director Darren Lynn Bousman also teased the plot of a possible sequel in an interview with Esquire:

So if Spiral was all about Will taking down corrupt cops, Spiral 2 could focus on other institutions. It’s an interesting idea for a franchise, though whether we get a sequel at all remains to be seen.

Spiral is now in theaters.

More like this
Entertainment
7.28.2022 12:00 PM
Nope ending explained: The deeper meaning of Jordan Peele’s sci-fi thriller
By Eric Francisco
Entertainment
7.28.2022 6:00 PM
Kevin Bacon on monsters, 'They/Them,' and bringing his Mutant to the MCU
By Dais Johnston
Culture
7.28.2022 11:30 AM
You need to watch the most underrated sci-fi thriller of the '60s before it leaves HBO Max next week
By David Grossman
Related Tags
Share: