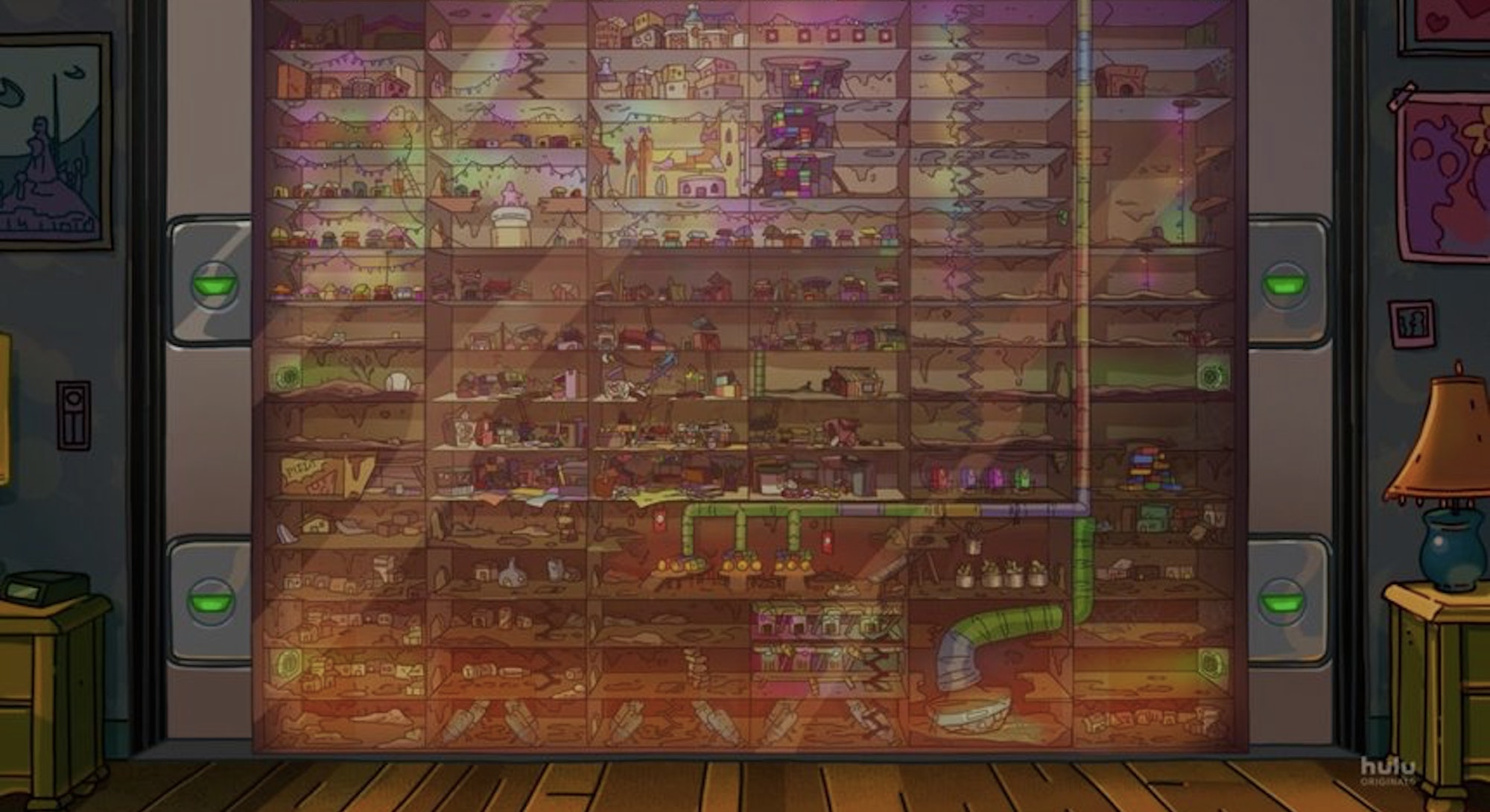 If you haven’t watched Solar Opposites yet, well, drop everything and do it now.

The eight-episode series might not be as smart as Rick and Morty, but it’s just as funny and the premise is immediately accessible: four aliens and a Pupa crash land in suburban America, sci-fi hijinks ensue. The entire thing makes for a quick binge (Hulu says 40 percent of viewers watched the whole show in a weekend), but hidden in those eight episodes is a serialized story that you'll appreciate best by devouring the entire show in one gulp.

Solar Opposites begins as a pretty standard adventure-of-the-week sci-fi series, but there’s an epic story building slowly in the background. Literally. Often serving as the backdrop for unrelated scenes, "the wall" is a giant terrarium filled with shrunken-down humans forced to create their own post-apocalyptic society inside its transparent walls. (It's just as ridiculous and awesome as it sounds.)

The story of the wall creeps up on you until it's the most important thing in Solar Opposites. But, as McMahan tells Inverse, those tiny humans were always a key part of the show — they might even be more important than the starring aliens.

“You could argue the show is either Solar Opposites and the wall, or the wall and Solar Opposites,” McMahan tells Inverse, “depending on whatever you want to focus on.”

After giving us bits and pieces of life inside the wall, Episode 7 (titled "Terry and Korvo Steal A Bear" in a bit of misdirection straight out of Rick and Morty) takes place entirely within the terrarium as an oppressed (and tiny) lower-class rises up in a bloody revolution not again the aliens but against their tiny human oppressors.

This might sound like a distraction from the main plot, but for McMahan and Roiland, the wall was always part of Solar Opposites, even before Hulu picked up the show for its initial two-season order.

Originally, McMahan and Roiland planned to tell a different serialized story within each season of Solar Opposites. They saw it as their version of The Wire, where the larger series narrative intercut with season-long arcs focused on dock workers or teachers.

“I love the show The Wire and I wanted to do something that mirrored it,” McMahan says.

However, that vision changed as they became more attached to the characters and world they’d created. “We really got excited about taking the world inside the wall and making it serious and dramatic for characters that were in there, but while using Lego helmets and eating candy and stuff.”

In an interview with Cinema Blend agreed that the idea of the wall quickly grew on him during the writing process.

“It was really an interesting concept that I fell in love with right away,” Roiland said. “I just loved the idea of exploring humanity on that level: What would actually happen if you were shrunk down into a wall and you were in there for a really long amount of amount of time?”

The epic tale of the wall begins slowly. Two “child” aliens (they’re actually kid-sized replicants of the adult aliens Terry and Korvo, both voiced by Roiland) begin shrinking adult humans and locking them in a giant terrarium, feeding them candy occasionally but quickly moving on to other activities.

Without regular food or protection, this tiny human society devolves into a post-apocalyptic wasteland somewhere between Mad Max and Escape From New York. There’s even a corrupt Duke voiced by Alfred Molina — a direct reference to the character played by Isaac Hayes in the John Carpenter cult classic.

For McMahan, who told Inverse the world-devouring Pupa was inspired by his first child, the concept for the wall also came from observing the way kids behave.

“My vision for the wall was less the replicants studying it and more what I noticed with kids, which is they're excited about something for a day and then they just kind of forget about it, and it's left to its own devices,” he says.

Within their terrarium, these shrunken humans invent new religions and class structures. One character even becomes a prophet, inspiring a downtrodden population to rise up against the Duke. In the end, Solar Opposites is way more revolutionary than Escape From New York ever was, even while its characters kill each other with toothpicks and floss picks.

I won't spoil the ending, but the story of the wall leaves off on a thrilling cliffhanger, leaving Roiland and McMahan plenty of room to explore and expand on the concept in Season 2, which they've already written as part of their deal with Hulu.

“In the second season we continue with the wall story and expand it into a new area,” McMahan says. “I mean, not literally expand it, but expand the storytelling into a place that continues the story of the wall in a way that you guys won't expect, It's more of the wall. Not in the same way, but still following the characters and the stories we're telling.”