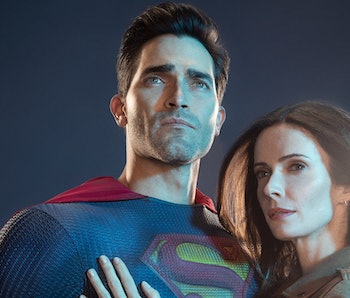 Superman has gone rogue. Superman is wearing a black suit. Superman may turn evil in the future unless we stop him in the present.

If you started getting hyped just thinking about these gritty and controversial plot points in Zack Snyder’s Justice League, here’s a Smallville Gazette news-flash: All of these plot elements are also playing out on the new CW show Superman and Lois — but in entirely different ways, and crucially, not for shock value.

In fact, nearly a full month before the Snyder Cut hit, Superman and Lois busted-out a black-suited Kal-El and a kooky alternate world in which Superman is an evil enforcer. Take that Snyder Knightmare! Superman and Lois is hardcore, too! And that’s only the second episode!

Man of Steel versus the Man of Tomorrow

At first blush, you might think the CW’s new drama Superman and Lois is exactly what it sounds like: A family-drama reboot of Lois and Clark: The New Adventures of Superman. When you watch the opening moments of the first episode, however, you might actually think the show is closer to Christopher Reeve’s Superman era, albeit in the Arrowverse.

The second assessment is the closer one. In fact, several shots from the pilot episode — which aired February 23, a full three weeks before the Snyder Cut — are nostalgic as hell for those who grew up with Reeve as their Man of Steel.

Do you love thinking about the way Superman looked in Action Comics and then imagining that in a contemporary show? Superman and Lois did that exact thing in the first 5 minutes. Did you love the way Reeve’s Supes froze that lake in Superman III? In the first episode of this CW series, we see new Superman Tyler Hoechlin using freeze-breath to create, and then lift, an iceberg.

Tonally and aesthetically, Superman and Lois has many identities. By exploring various takes on Superman simultaneously, the show is giving the character and his world much more depth than the DCEU’s one-note version.

To be clear, Tyler Hoechlin isn’t in competition with Henry Cavill. I’m not going to sit here and tell you that Hoechlin is a better Superman than Cavill, or vice-versa. But, unlike the Snyder-verse version of Superman, Hoechlin’s Kal-El feels like a character we can actually follow for several hours, without getting bored.

This is the fundamental difference between Superman and Lois and Snyder’s Superman. In the DCEU, the apparent “boringness” of Superman was dealt with quickly: He was killed-off in his second-movie ever (Batman v Superman), and then, in Justice League — both versions, mind you — he’s brought back from the dead, while also holding the distinction being the main character with the least amount of screentime.

In Zack Snyder’s universe, it doesn’t seem like the writing is about Superman. Instead, the three DCEU movies in which he appears are written around him. Even interesting ideas, like Lois Lane maybe having a kid, are mostly just weird Easter eggs in the DCEU. What’s more, the threat of Superman becoming violent is treated as an abstract consequence not once, but twice in the Snyder Cut. In both instances, this supposed “Evil Superman” doesn’t scan as legitimately scary, because the concept is so clearly reversible.

In other words, for all of its super-dark-bark, the Snyder Cut doesn’t have much bite. Superman and Lois, meanwhile, is the exact opposite.

Superman and Lois is darker than you think

Superman’s children in Superman and Lois aren’t hypothetical. They are, arguably, a larger focus of the show than Lois. On top of that, a shadowy, evil version of Kal-El isn’t in some nightmare sequence, but is very real, and exists in a parallel dimension. While it scans as a sunnier, more upbeat family-friendly version of the most straight-laced superhero, Superman and Lois is actually more transgressive than the overly violent Snyder Cut — because it plays its stakes more realistically.

In both the Snyder Cut and Superman and Lois, Clark has to get his farm back from a predatory bank. In the Snyder Cut, Bruce Wayne just “buys the bank” and makes the money problem go away. In Superman and Lois, the ongoing financial corruption in the town of Smallville is a major plot point. Also, Clark gets laid off from his job at The Daily Planet, which, technically, makes Lois Lane the primary source of income for the Kent family.

Superman is more than just a tragic superhero

The Snyder Cut was four-hours long. So far, Superman and Lois has aired five episodes, but even the first three hours have delivered a ton of real character development for Lois Lane, Superman, the mysterious “Captain Luthor,” and the two Kent boys; Jordan and Jonathan. Evil Kal-El’s black suit on Superman and Lois showed-up two weeks before the Snyder Cut — and yet it barely moved the needle with online comic book fandom.

Superman and Lois streams for free on The CW app.