"In one of our drafts we had a kid from Atlantis" 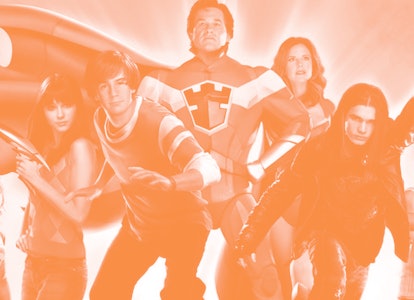 Cinematic superhero universes keep getting bigger with each new movie, but we still haven't seen what a world full of DC or Marvel heroes looks like in live-action. Sure, Infinity War has a cast so big they barely fit a movie's runtime, but when it comes to the actual Avengers there are barely enough of them for a baseball team.

That wasn't the case in 2005's Sky High. The Disney film, which follows a teenage superhero-to-be in a high school for future heroes, feels like part of a larger world we barely get to see. From newspaper clips and talks of exploits past to every adult character acting like they just came out of their own movie trilogy, the film felt bigger than its $35 million budget. But as big as the world of Sky High or its titular floating high school felt, it was almost even bigger.

As co-screenwriter Mark McCorkle tells Inverse, Sky High almost expanded its superhero world to include the ocean with its very own Aquaman knockoff, with a touch of Groot.

"In one of our drafts we had a kid from Atlantis who essentially looked like a sort of fish-type person out of water, almost Creature From The Black Lagoon-ish," McCorkle says. "The idea was that it was like he was an exchange student and all he could say in English was one thing, like 'I am the Royal Prince of whatever' and he'd say it over and over again in different intonations."

Even without an Aquaman stand-in, Sky High is still filled with references and jokes about superhero tropes. There's a former sidekick who wears a cape and very short shorts and even a discussion on the dangers of acquiring superpowers via radioactive insect bite, but McCorkle says that the film mostly avoided any direct reference to established characters.

"The idea was that we could evoke the mood or feeling of superheroes that are out there, whether it's Marvel, DC or another company, but we never wanted to dead-on reference anything specific," he says. "We didn't want to act like that was the world of Sky High, instead we wanted to make the film feel like a comic book world, but one that stood on its own.

That philosophy also dictated the creation of some of the movie’s best superheroes, including a memorable performance by Kurt Russell as a super-dad who struggles to cope when his son doesn't develop powers.

“The Commander definitely evokes elements of Superman and Captain America combined, that sort of straight-arrow guy from a different era,” McCorkle says, “but he still feels like his own character."

The Disney movie came out at a unique time for superhero movies. X-Men and Spider-Man proved there was money to be made in spandexed do-gooders, and Batman Begins revived the public's interest in the character after a few controversial movies. These films took a grounded approach to comics that erased some classic elements from the source material — no Lazarus Pit in Nolan's film, jokes about the original X-Men suits, etc. By comparison, Sky High looks like it came straight out of the pages of a Silver Age comic book, embracing sporting bright colors, ridiculous costumes, and a campy plot.

“Sky High proved that you can be bright and colorful and still resonate with real human emotions.”

For McCorkle, this was one of the strengths of Sky High that helped it stand out.

"Mike [Mitchell, the director] had a vision of bright colors and it being friendly and upbeat,” McCorkle says. “I'm not going to say cartoony, because I think the characters play as real, but we certainly added things like a flying bus and science class being taught by a literal mad scientist.”

However, it was the costumes in particular that made Sky High such a unique superhero movie for the mid-2000s.

“At the time, lots of superhero movies that were huge box office hits decided to go with black costumes,” he says. “The X-Men movies wouldn't do the old-fashioned blue and yellow, because I think there was a real fear of superhero stuff being too campy or corny or it shouldn't be colorful and bright and cheerful. Sky High proved that you can be bright and colorful and still resonate with real human emotions and a real story."

Though rumors of a sequel have circulated for years without an official greenlight announcement, McCorkle thinks more stories in this universe would be a perfect fit for Disney+.

"To me, it's a very natural fit for Disney+, and over the years we always thought maybe a sequel could happen one of these days," he says. "There was always a belief that this was a rich enough world to keep going with new ideas. At least Mike seems to believe it. I guess if the film still has that same affection of people watching it and streaming it on Disney+, who knows. Maybe if the people speak, their wishes will be answered."