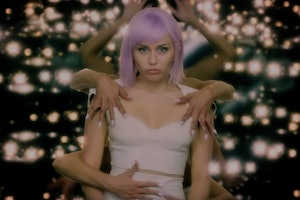 Shows like 'Black Mirror': 8 brainy thrillers to stream in quarantine

For some folks, the best TV distraction in the middle of the pandemic is to imagine a variety of dystopias even more specific and frightening than the one we're in right now. This strategy is legit, and if you're watching Black Mirror as a kind of catharsis to help release some feelings about COVID-19, we get you.

But maybe you've played every single ending of Bandersnatch and you're looking for something similar to watch. What if you're done with Black Mirror and want a show that occupies that dark part of your mind?

Here are eight anthology shows that live in the horror or sci-fi neighborhood that might be perfect to scratch that Black Mirror itch. (Though we don't recommend scratching that. It was probably left by a robot bee.)

From across all of space and time, these shows are as good as Black Mirror and just as thrilling to watch for viewers who like to step through the looking glass in every single episode.

For fans of Black Mirror who liked: Twilight Zone too, but have already seen that a million times.

Look, I'm not to include the original Rod Serling sci-fi/horror anthology classic — The Twilight Zone — on this list, because it's a given. If you like Black Mirror, then you've heard of the original Twilight Zone and you've probably seen it. But, what you almost certainly have not seen is Rod Serling's other big anthology series, Night Gallery. I can't think of a more underrated and overlooked horror anthology in the entire universe. It's like after making The Twilight Zone, Rod Serling decided, "Okay, I'll do that again, only everything will be filmed like a grindhouse horror flick, even if its just too people sitting in a room talking." If you're looking for something that looks slick, this is not it.

For fans of Black Mirror who liked: The subtle, paranoid British-ness.

This is the only non-anthology series on this list. That said, there is nothing more Black Mirror than a show about an ex-secret agent living in an idyllic town which he can't escape. The origin of paranoid, subtle science fiction arguably originates with The Prisoner. The show also has fairly high production values and feels more like you're watching a Hitchcockian thriller than a weird old-school sci-fi show. Either way, the essential weirdness and darkness of this series will suck you in.

For fans of Black Mirror who like: The diverse types of crazy standalone stories.

Yes, we all slept on Apple TV+ before the coronavirus, but now that Apple is offering one year totally free there's really no excuse. Now, I know what you're thinking. Shouldn't Black Mirror fans be into the alternate-history pseudo-sci-fi show, For All Mankind? Sure. But, Steven Spielberg very quietly started shepherding the new Amazing Stories just this years. New episodes are still dropping every week. This is like picking up the old pulp magazine, Amazing Stories, only now its made in the post-Black Mirror era. It's not perfect, but it is new, and the concepts are all over the place.

For fans of Black Mirror who like: Trippy science fiction.

When this show was first coming out, the name Philip K. Dick alone meant it was poised to dethrone Black Mirror's essential Black Mirror-ness. From books like A Scanner Darkly to the prescient automation short story, "Autofac," the work of Philip K. Dick occupies the same pessimistic — yet super-intelligent — space as Black Mirror. As an anthology TV series based on several of Dick's best shorty stories (like "Autofac") there's nearly something for everyone here. Is the show better than Black Mirror? No. But it will make sci-fi fans very, very happy.

For fans of Black Mirror who like: Weird sci-fi stories with celebrity guest actors.

If you've never read the short fiction or excellent novels by Ray Bradbury, I don't pity you at all. In fact, I envy you! I would love to rediscover the brilliant and subversive work of one of the greatest science fiction (and horror!) writers of all time. But, regardless if you're Bradbury savvy or not, this overlooked '80s classic essentially adapts some of Bradbury's best short stories into bite-sized stories worthy of Black Mirror premises. Whether its book-police being tricked into seeing their robot duplicates murdered, or time travel stories involving dinosaurs, this show is packed with nearly every conceivable sci-fi trope you (or Bradbury) can imagine. And from Jeff Goldblum to William Shatner, to Drew Barrymore, the guest cast is also amazing. Warning: the production value is very low-budget '80s. And if you're put-off by the self-serving introduction where Ray Bradbury talks about how great his imagination is, I'm sorry. But, don't say you haven't been warned.

For fans of Black Mirror who like: Horror (and The Purge)

Hulu's anthology horror show is something of a sleeper hit, and other than the fact that it's scary and isn't serialized, it doesn't have a whole lot in common with Black Mirror. This isn't so much a cautionary sci-fi show, as a straight-up horror one. That said because this comes from Blumhouse, the quality is pretty damn high, and because there's so much of the series already out, a hungry horror fan is bound to find something they like. Plus, like Amazing Stories, a new season is happening right now. The biggest difference is each episode is like a mini-movie, and they're released monthly, not weekly.

For fans of Black Mirror who like: The sci-fi episodes.

Often in the shadow of the OG Twilight Zone, the fantastic thing about The Outer Limits is that the kinds of stories are way more diverse. And when it comes to speculating about technology, The Outer Limits was way ahead of its time. In Harlan Ellison's famous "Demon With a Glass Hand," you're basically seeing a black-and-white version of Blade Runner if Black Mirror's Charlie Brooker had written it via time travel. Plus, The Outer Limits has one thing Black Mirror doesn't: actual space aliens.

For fans of Black Mirror who like: Strong social statements.

Of all the shows on this list, the newly rebooted version of The Twilight Zone is easily the most underrated and overlooked. Yes, when it was announced that the absolutely brilliant Jordan Peele would be hosting and producing a new version of The Zone, the internet rejoiced. And yet, there's a very good chance you've missed this show. To be clear, this series is not your parent's version of The Twilight Zone and is a billion times more political. Not every episode will be everyone cup-of-creepy-tea, but that's kind of the point. Yes, you've got one episode set aboard a spaceship and another one set in a normal town, pretty much back to back. Do meteors cause people to go insane? Are you really living in a TV show? Are certain guns alive? What would happen to immigrants from alternate dimensions?

Jordan Peele's new Twilight Zone tackles all of these questions in ways that you probably won't see coming. The series is simultaneously more old-fashion and riskier than Black Mirror. And, because so many of the stories demonstrate what it's like when the world unravels, it's the absolute perfect show to watch right now.

Perhaps the best part? Thanks to Star Trek: Picard offering a complimentary free month of CBS-All Access, you won't have to pay for this trip to the Zone at all.