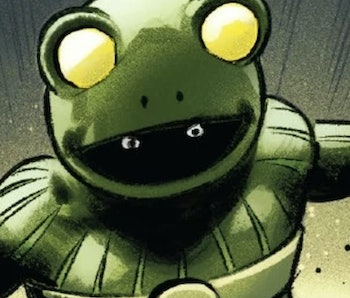 The first trailer for She-Hulk: Attorney at Law features a number of unexpectedly wacky moments and goofy images. From Jennifer Walters (Tatiana Maslany) literally carrying a Tinder date to bed, to Walters and Bruce Banner (Mark Ruffalo) drinking at a bar while in their hulk forms, the She-Hulk teaser does a good job of selling what an odd ride MCU fans are in for when the series premieres in August.

The She-Hulk trailer also features several brief appearances from some notable comic book characters, including Titania (Jameela Jamil) and Abomination (Tim Roth). Thanks to a brief shot in its closing moments, the trailer also confirms that the Disney+ series will feature the MCU debut of one goofy Marvel Comics character.

A New Kind of Marvel Hero — Around the 1:22 mark of the She-Hulk trailer, a character wearing a green and yellow superhero costume can be seen preparing to square off against an unknown enemy. They’re only visible for a moment, but their wacky Power Rangers-esque costume ensures they make an immediate impression.

While the character’s identity hasn’t been confirmed, the design of their costume has Marvel fans convinced the unknown fighter is none other than Frog-Man. The character is an obscure figure who’s just as absurd as his moniker suggests.

The Fabulous Frog-Man — In the comics, Frog-Man is the superhero moniker that Eugene Patilio gives himself. Eugen is the son of Vincent Patilio, a failed inventor who turned to a life of crime and began calling himself Leap-Frog. After Vincent went to prison, Eugene made it his mission to restore his father’s reputation by using the Leap-Frog costume to do good.

His attempts to fight crime have seen him cross paths with Spider-Man, the Human Torch, and Captain America, and he almost always helps them defeat their enemies through nothing more than dumb luck.

At one point, Eugene tried to join the Defenders but was rejected. He then later teamed up with Spider-Kid and the Toad to form a group called the Misfits. The team quickly fell apart, and Eugene’s relationship with his father took a turn for the worse. Despite feeling proud of his son’s accomplishments, Vincent also became bitter about his suit being used for superheroics.

Later, during the Skrulls’ invasion of Earth in the Secret Invasion storyline, Frog-Man was revealed to be one of the heroes secretly replaced by a Skrull impersonator. It’s unclear whether the Frog-Man seen in She-Hulk will show up again in Secret Invasion.

The Inverse Analysis — Frog-Man’s presence in She-Hulk had been kept a secret prior to the release of the show’s trailer, so it’s impossible to tell what role the character will actually play in the Disney+ series. We assume Jennifer will run into him for some comic relief in an already goofy series.

Given how absurd Frog-Man is it’s difficult to imagine he’ll have a larger role than that in She-Hulk, but weirder things have happened in the MCU.