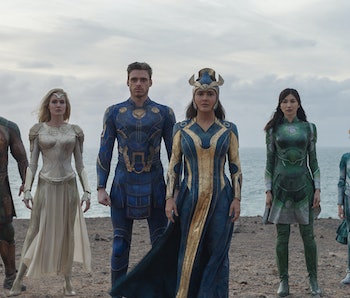 Shang-Chi and the Legend of the Ten Rings intentionally left the origins of its titular Ten Rings a mystery.

But just days after its release, a new theory connects these all-powerful objects to the next big Marvel ensemble picture: Eternals, out later this year. Is a secret connection between the two hiding in plain sight?

What Happened? — In a popular TikTok shared by pop culture podcasters Just the Nobodys, the Ten Rings are linked to the Eternals through one of the most basic elements in cinema: color.

“In the Marvel Universe, colors matter a lot,” says one of the co-hosts, who identifies himself as only “Daniel.” As he explains, certain types of energy, be it mystical, cosmic, or dark magic, correspond to colors like orange and purple. Cosmic energy is gold, which is the color of the Ten Rings once taken by Shang-Chi. (Shang-Chi’s father, Wenwu, wore the Ten Rings when they were blue.)

Gold is also the color exuded by the Eternals, which hints the Ten Rings belong to them. “All their powers are gold,” opines the host. Daniel further adds that there are ten Eternals in Marvel’s upcoming Eternals, another hint that each ring could correspond to a specific Eternal.

You can watch the TikTok video here.

The Eternals and the Ten Rings — Whether this theory pans out or not, one thing is for sure: It’s not true to the comics.

On the page, the Eternals, Shang-Chi, and the actual owner of the Ten Rings, the Mandarin, all have very little to do with each other. (Shang-Chi’s father is a different villain, Zheng Zu, essentially a reinterpreted Fu Manchu.) And in the comics, the Ten Rings were recovered by the Mandarin from an alien spaceship belonging to the dragon Fin Fang Foom.

The Eternals, meanwhile, are hybrid alien beings who’ve lived secretly among humans for eons. It’s possible the Ten Rings could have belonged to the Eternals and that the all-powerful beings lost them to Wenwu, who kept the rings for himself for hundreds of years.

While this theory does feel substantial, including the parallel ideas that both the Ten Rings and the Eternals are ancient and alien, some logical follow-up questions cast doubt on its accuracy.

On the Other Hand... — Casting further doubt on this theory is the fact that the Ten Rings’ color change works specifically within the cinematic logic of Shang-Chi, which is visually distinct from other Marvel films.

Blue and orange/gold are attractive, contrasting colors seen everywhere in Hollywood movies. To make sure audiences didn’t forget who possessed the Ten Rings at any moment, it made sense for Shang-Chi to feature the colors glowing in opposing colors corresponding to either Wenwu or Shang-Chi. It was surely helpful for viewers watching the final climax to understand through shifting colors when the rings were changing ownership.

If the Ten Rings do belong to the Eternals, also, why would they glow blue at all? Why would a change in ownership from Wenwu to Shang-Chi return them to their “natural” colors?

The Inverse Analysis — While the Ten Rings could still be connected to the Eternals somehow, the MCU would have to answer a host of important questions in order for this reveal to actually work.

Personally, I’m less concerned about the colors contained within the Ten Rings and more interested in what purpose they might serve for the Eternals, who have incredible powers all their own. Why they would need to possess the Ten Rings is, at this stage, puzzling.

But the MCU has been blown wide-open by Phase Four. No matter what is revealed about the Ten Rings, fans will have questions about them for months and possibly years to come.