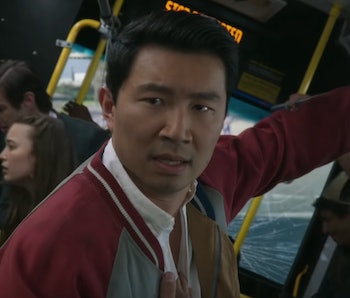 The Master of Kung Fu doesn’t have to fight alone. In the first official teaser trailer for Shang-Chi and the Legend of the Ten Rings, Marvel fans learn that the master of martial arts (played by Simu Liu) has taken up a quiet life in San Francisco. Away from his father, Wenwu (Tony Leung), Shang-Chi lives in a city with an established history of Marvel heroes. This begs the question: Is Shang-Chi setting up Marvel’s biggest plans for Phase 4?

In the trailer for Shang-Chi and the Legend of the Ten Rings, due in theaters September 3, the Marvel movie follows its title hero in San Francisco. Aside from being a major city with a history of Asian immigration and roots in Asian-American culture (Shang-Chi is Marvel’s premier Asian superhero), the city has an established place in the Marvel Cinematic Universe.

The Bay Area has been the setting of both Ant-Man (2015) and Ant-Man and the Wasp (2018), where Paul Rudd’s Scott Lang has done his thing. And it was in Ant-Man and the Wasp where Scott met one of Shang-Chi’s closest allies in the comics: Jimmy Woo, played by Randall Park, who made a very recent return to the MCU in the Disney+ series WandaVision.

Now, San Fran is a big city of over 800,000 people. But the MCU has shown that even galaxies don’t keep characters from being far apart, which means it’s possible for Shang-Chi to not only have an Ant-Man crossover (Will Luis recap Endgame to Shang-Chi?) but set the table for a Phase 4 team-up. Whether that means a fifth Avengers movie or something else is harder to speculate, but there’s no way the MCU goes to San Francisco and not bring back a familiar face or two — or four, as is the case with one specific family.

An Ant-Man cameo in Shang-Chi would no doubt be a lot of fun. Imagine for a moment Scott Lang trying and failing to steal the Ten Rings from Shang-Chi’s father, with Hank Pym and the Van Dynes Hope and Janet along for the ride.

But there is a stronger contender with deep comic book precedent who is more likely to team with Shang-Chi: The aforementioned Jimmy Woo.

In the comics, Jimmy Woo is famously the team leader of a squad of superhero agents called the Agents of Atlas. (The name is a nod to Atlas Comics, which was Marvel Comics before the publisher adopted its current, most famous name in 1961.) While there are different iterations of the team, the common factor is Jimmy Woo. And Shang-Chi is a part of the latest version of Agents of Atlas, who are comprised of Asian superheroes in the Marvel Universe.

The series finale of WandaVision hinted at Jimmy Woo’s ascension to leadership — “Authority looks good on you, Jimmy” — but there’s not yet an official Agents of Atlas series or movie confirmed for Phase 4. Still, all it takes is one single visit to a San Francisco karaoke bar for Woo and Shang-Chi to cross paths and start talking about teaming up. (In the comics the two went out to karaoke with other Marvel heroes, in Totally Awesome Hulk #15.)

Will Shang-Chi have cameos?

Given that Shang-Chi is another entry in the ongoing MCU franchise, it is a totally safe bet to expect cameos, but who could show up is difficult to parse out. Few expected Sebastian Stan to appear as Bucky Barnes/Winter Soldier in the post-credits scene of Black Panther (to set up Avengers: Infinity War), and Ben Mendelsohn showing up as Talos in Spider-Man: Far From Home was another surprise that we’d later learn were seeds for the Disney+ series Secret Invasion.

Something to keep in mind too is that Shang-Chi filmed during the Covid-19 pandemic, when travel tightened and most people stayed home. (Shang-Chi even suspended filming for a time before wrapping in fall 2020.) This makes it hard to actually have a physical cameo if most MCU actors were stateside while Shang-Chi shot in Australia. If anything, the only possible cameo would be something setting up Thor: Love and Thunder, which is also shooting in Australia as of this writing.

Other than Secret Invasion, there are no known plans for a big MCU team-up in Phase 4. (For now, at least.) Shang-Chi could either have a cameo that sets up Secret Invasion again, or something else yet to be announced like an Agents of Atlas movie.

Alternatively, Shang-Chi could bring its hero face to face with any of his future Avenger colleagues to set up a fifth Avengers movie. We are just days away from MCU crowning its new Captain America. Shang-Chi in September is a fitting time for the MCU to formalize there is a new sentinel of liberty — and a master of kung fu standing by his side.

Shang-Chi and the Legend of the Ten Rings will open in theaters on September 3.

More like this
Entertainment
20 hours ago
Ant-Man's Memoir Is Real and Hints at Dark Quantumania Ending
By Eric Francisco
Entertainment
Jan. 26, 2023
Corey Stoll could have the chops to make a live-action M.O.D.O.K. work
By Mónica Marie Zorrilla
Entertainment
Jan. 25, 2023
The MCU could bring back a hero from its most underrated TV show
By Dais Johnston
LEARN SOMETHING NEW EVERY DAY.
Related Tags
Share: