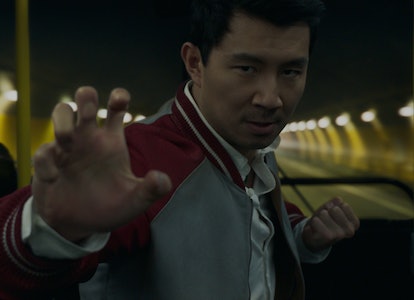 Shang-Chi has arrived in the Marvel Cinematic Universe, and make no mistake, he’s here to stay.

The comic book hero (played by Simu Liu) makes his long-awaited MCU debut in Shang-Chi and the Legend of the Ten Rings. The film firmly secures Shang-Chi a place among the Avengers for the foreseeable future, establishing his personality, skills, and emotional complexity in what is undoubtedly one of Marvel Studios’ best origin stories to date.

One scene in Shang-Chi stands out while setting up its protagonist as a thrilling new addition to the Marvel universe. It’s a sequence that’s not only the best Shang-Chi has to offer, but one that executes a specific superhero movie trope better than any other MCU film before it.

Yes, we are talking about that bus fight.

Coming near the end of the film’s first act, the bus sequence in Shang-Chi and the Legend of the Ten Rings sees its hero and his best friend, Katy (Awkwafina), ambushed by members of the Ten Rings, including the fearsome Razor Fist (Florian Munteanu). What follows is a fight sequence that sees Shang-Chi facing off against multiple bad guys at once, even as Katy tries to bring the increasingly out-of-control bus to a stop.

It’s one of the most genuinely thrilling sequences in any Marvel movie in recent memory, and even more impressively, ranks as the best “hero shows off his powers for the first time” scene of any MCU movie to date. Not only does Shang-Chi’s ability to take on so many foes at once in the scene establish him as one of Marvel’s most skilled hand-to-hand combatants, but the scene also achieves a level of weight and tension that, frankly, is rare to find in most modern Hollywood blockbusters.

Perfectly choreographed, the bus sequence pays homage to iconic Jackie Chan movies; and as the MCU’s first real martial-arts fight scene, it immediately stands apart from past Marvel action setpieces. However, behind the sequence’s technical accomplishments (of which there are many) are a number of screenwriting decisions that further elevate it into greatness.

The first comes as one of the Ten Rings’ henchmen pushes Katy’s head into a bus window. It’s a shocking moment, one that will elicit surprised gasps from audiences. It’s also what pushes Shang-Chi, who had previously been avoiding the fight, to unleash a punch that puts Katy’s attacker flat onto his back.

The beat is charged with emotion; by bringing Katy into the violence, the filmmakers fill us with exactly the same rage and adrenaline Shang-Chi feels in the moment (because, honestly, how dare anyone attack Katy). But Shang-Chi throwing out his first punch isn’t just cathartic — it’s also a thrilling prelude to the action he’s moments away from unleashing.

And, fortunately, the action very much delivers on the promise of that moment.

The beat itself doesn’t just work emotionally, also functioning as a major reveal. It forces Shang-Chi to become an active participant, letting slip some of his secrets in order to protect his best friend. It’s a legitimate character beat, which is why it works as well as it does.

The sequence also, thankfully, has clear, simple stakes: the Ten Ring henchmen want the Ta Lo pendant around Shang-Chi’s neck, and he won’t let them have it. Keeping the stakes grounded in this way allows the filmmakers to maintain a constant level of tension throughout the bus sequence, even as the tension of its central melee intensifies along with the bus accelerating.

Notably, this isn’t the first time that Marvel has employed this “keep away” mechanic in its action scenes. The studio used a very similar device with the Infinity Gauntlet in the climax of 2019’s Avengers: Endgame, but it works even better in Shang-Chi than it did in there (largely because the geography of the scene is far better established and exploited).

Combined, these decisions make Shang-Chi’s fight against his adversaries so thrilling and engaging that it’s hard to think of a better MCU hero debut. It’s more impactful and engaging than Steve Rogers’ (Chris Evans) first Super-Soldier run through the streets of Brooklyn, Tony Stark’s (Robert Downey Jr.) combat mission as Iron Man, and Thor’s (Chris Hemsworth) introductory battle on Jotunheim. About that, there can be no doubt.

The Inverse Verdict — Superhero setpieces don’t get much better than the bus fight in Shang-Chi and the Legend of the Ten Rings. Not only is this scene well-directed and choreographed, but it’s also littered with character beats and twists that make it the most enthralling sequence in the entire film.

That Cretton and his collaborators also fill the scene with a number of delightful running gags (a passenger who streams and narrates the fight) and minor pay-offs (a destructive use of one poor girl’s computer) makes it all that much more impressive. The bus sequence is brilliantly executed, and if its aim is to cement Shang-Chi as a formidable new hero in the MCU, it succeeds with flying colors.

Shang-Chi and the Legend of the Ten Rings is playing in theaters now.