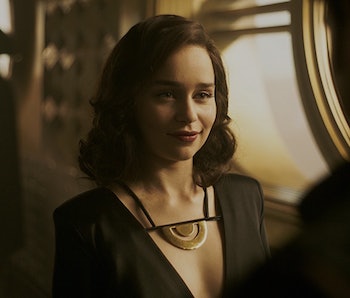 The Marvel Cinematic Universe has a threat looming under the surface. After a handful of post-credits scenes revealing some characters we know and love are now reptilian Skrulls, there’s no denying that the Secret Invasion is underway.

Ahead of the dedicated Secret Invasion Disney+ series, an MCU leaker has let slip a key role — and she may just become the supervillain of the entire show. Here’s everything you need to know.

According to leaker MyTimeToShineHello on Twitter, Game of Thrones and Solo actress Emilia Clarke will play Veranke, the supervillain of the Secret Invasion comics plotline. Veranke is all over the comics continuity, but she’s probably best known for impersonating Spider-Woman and working as a double agent for Nick Fury.

Veranke’s introduction into the MCU has been a long time coming — leaks as far back as 2019 suggest she’ll be the main villain of Captain Marvel 2, which we now know will be called The Marvels. Now, that leak is slightly discredited by the fact that Zawe Ashton has already been announced as the villain of The Marvels, but there’s always room for multiple antagonists in a Marvel movie. Could this mean Clarke’s debut in the MCU could come sooner than we think?

There are greater implications to this leak too. If Veranke remains true to her comic persona and disguises herself as Spider-Woman, it would also mean Spider-Woman would make her MCU debut. After having three variants of Spider-Man in No Way Home, apparently all bets are off when it comes to Spider-Man in the MCU.

Perhaps there’s a way this leak could co-exist with Zawe Ashton’s role in The Marvels; since Skrulls can take on the image of whoever they want, maybe Zawe Ashton is actually playing Spider-Woman, and Emilia Clarke the true appearance of Veranke, or vice-versa. But considering Emilia Clarke is slated for a role in Secret Invasion, it’s more likely she’ll be playing Veranke.

While exciting, this leak is unconfirmed. Veranke may be neither of these actors. Previous fan theories have posited she may already be in the MCU in the form of Julia Louis-Dreyfus’ Contessa Valentina, who has now appeared in both The Falcon and the Winter Soldier and Black Widow.

Regardless of who Veranke will take the form of, the possibility of Emilia Clarke becoming the Big Bad of Secret Invasion — and maybe MCU movies beyond the series — is intriguing. Could the new Thanos look a lot like Daenerys Targaryen and Qi’ra? We’ll have to wait and see.