“Exterminate all man-animals at will, and happy hunting!” 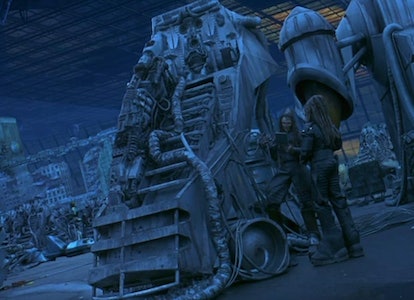 It’s hard not to love a passion project.

Whether it’s Stanley Kubrick acquiring the rights to Eyes Wide Shut decades before starting production on what would be his final film or Seth Rogen and Evan Goldberg coming together at age 13 to develop the teenage comedy that would slowly become Superbad, it’s inspiring to see someone’s long-term belief in a story eventually pay off.

That said, it’s also fun watching an idea like this fail miserably.

One failed sci-fi epic from 2000, though intended to be the next Star Wars, falls into the latter category. Though it’s bogged down in boring action, clunky dialogue, and (surprisingly) real-life ties to a cult, here’s why Battlefield Earth is worth watching on Netflix.

Battlefield Earth is a 2000 sci-fi film directed by Roger Christian, whose biggest claim to fame was previously as a second unit director for the original Star Wars. Intended to be a throwback to sci-fi epics of yore (as per Christian’s interview with Shadowlocked), the result comes off as a delightfully strange carbon copy of such films. But the deeper you dive into this film, the stranger it gets.

Battlefield Earth is the story of Earth circa the year 3000, by which point an evil alien race known as the Psychlos has been ruling for over a millennium. Because the Earth’s atmosphere is toxic to Psychlos, they use human slaves to mine Earth for precious metals. After one human slave, Tyler (Barry Pepper), is captured and sent to the Psychlos headquarters in Denver, Colorado, he learns about the history of human civilization and uses this knowledge to stage a revolution.

If this sounds like an intriguing premise, it probably won’t surprise you to learn that Battlefield Earth’s story is adapted from a classic sci-fi novel. What may be surprising is that this novel was written by none other than L. Ron Hubbard, prolific author and founder of the Church of Scientology.

Once you learn this, the rest of Battlefield Earth starts to make a lot more sense. Travolta, an outspoken Scientologist, shopped the film around for years. It briefly landed with Metro Goldwyn-Mayer but was eventually rescued by a small-scale studio, Franchise Pictures.

Don’t let the film’s botched release fool you, though. Battlefield Earth spares no expense; its $73 million budget was comparable to other major films of that time, like M. Night Shyamalan’s Unbreakable, and this shows through in the finished product. Playing Psychlo head of security Terl, Travolta delivers every line like it's the beginning of a great Shakespearean soliloquy, and the action is schlocky enough to enjoy while still showcasing the high level of production value that would make it watchable.

Sure, Battlefield Earth is regarded as one of the worst films of all time, but merely boring movies don’t get those kinds of accolades. Only the greatest, most outrageously bad movies earn such a label. In a way, it’s the perfect Netflix movie-night choice. This is never a movie you’d pay to see, but with the convenience offered by streaming, it’s a wonder to gawk in awe at this perfect storm of dedicated acting and poorly thought-out execution.