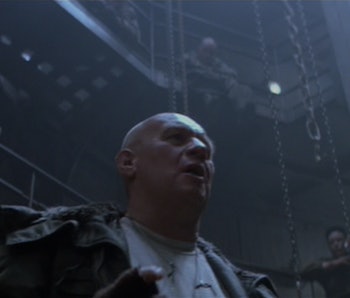 Making a sequel to one of the biggest blockbusters of all time is tough for anyone, let alone a first-time filmmaker. It takes an uncommon amount of confidence to come aboard a major franchise and deliver a movie that’s meant to measure up to the massive expectations of producers and fans. Not every filmmaker is cut out for that kind of high-pressure assignment.

The tortuous development history of 1992’s Alien 3 is a testament to just how many filmmakers weren’t cut out for the job. By the time David Fincher got the gig, the movie had been through multiple iterations, some of which would later become mythical among fans of the Alien series. Even Fincher’s own vision didn’t quite make it to the screen, as the version of Alien 3 that was released to theaters is a compromised film at best.

But while Fincher himself may have essentially disowned the movie (and didn’t participate in creating the later “assembly cut” meant to approximate his original conception), it’s still an underrated follow-up to two of the most revered sci-fi movies of all time, and skeptics can now stream it for free to see why. There’s a bracing nihilism to Alien 3 that’s almost completely absent from modern blockbuster filmmaking, a willingness to casually discard so many of the elements that made the previous film such huge hits. It seems almost spiteful the way that Fincher and the various screenwriters — both credited and uncredited — dispose of the survivors from James Cameron’s Aliens.

Before the opening credits have even finished rolling, an alien has brutally dispatched Corporal Dwayne Hicks and the child known as Newt. The android Bishop (Lance Henriksen) is also essentially killed, all but destroyed as their escape pod from Aliens crashes on the remote prison planet Fury 161. When he’s later briefly revived to help Ellen Ripley (Sigourney Weaver) access the ship’s flight data he’s pathetic and broken, pleading to be shut down.

While Cameron brought a level of sentiment to his portrayal of Ripley and the supporting cast in Aliens, Fincher’s approach is harsh and unmerciful, breaking Ripley down physically and emotionally. Alien 3 gives no consideration to the audience’s attachment to Newt, Hicks, and Bishop, although Ripley has a tender moment as she tearfully examines Newt’s corpse for signs of alien infection. She then insists that the planet’s medical officer, Jonathan Clemens (Charles Dance), perform an autopsy, and Fincher almost luxuriates in the crunching sounds of Newt’s chest cavity being pried open.

With its contained setting, limited cast, and single alien threat, Alien 3 returns to the pared-down horror of Ridley Scott’s original 1979 film, rather than Cameron’s outsized action. Fury 161 is home to just 25 inmates, left behind as caretakers for the crumbling refinery. They’ve created sort of cult led by the righteous Leonard Dillon (Charles S. Dutton), and the all-male population treats Ripley like an alien herself. But, after her ordeals in the previous two movies, she isn’t afraid of a bunch of unwashed brutes. With her shaved head (a necessity in the lice-infested facility) and gray prison attire, Ripley looks like she’s been ground down to her essence, and for much of the movie she’s acting on pure instinct.

That instinct may come in part from the fact that Ripley is gestating an alien, which is heavily foreshadowed via a variety of symptoms and finally revealed in a harrowing scene of Ripley undergoing a bio-scan, learning of her condition like a patient suffering from a terminal illness. Weaver plays Ripley with a mix of regret and determination, wearily making her way to what she knows is a grim destiny. She’s the only one who understands the true threat of the alien, and ultimately the only one who can stop it. “It kills on sight and is generally unpleasant,” scoffs the prison superintendent when she explains the alien threat, but he’ll soon regret his glib tone.

Aside from a protracted and sometimes confusing climactic plan to trap the alien, Alien 3 is lean and unflinching, like Ripley herself. It works as a metaphor for various types of illness and infection, and even carries new resonance today because of it. It offers another step on Ripley’s personal journey, placing her even closer to the monsters who’ve come to define her life. It’s a marvel of production design and costumes, all grimy corridors and tattered outfits.

It even features one of the most iconic images of the entire franchise, with the alien inches from Ripley’s face, yet refusing to attack her. It may be the result of conflict and compromise, but it’s a better movie than even its creators give it credit for.

Alien 3 is now streaming for free on Tubi.

More like this
Culture
Jan. 20, 2023
Why The Lost World is better than all the other Jurassic Park sequels combined
By Ryan Britt
Culture
Jan. 25, 2023
David Cronenberg made the best Stephen King adaptation you probably haven’t seen
By Jon O'Brien
Culture
Jan. 15, 2023
Everyone remembers Twilight, but a better vampire movie rode its sparkling coattails
By Ryan Britt
LEARN SOMETHING NEW EVERY DAY.
Related Tags
Share: