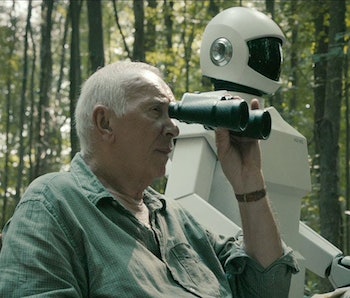 There aren’t many sci-fi movies like this one. The genre tends to look to the future, and that usually means shocking visuals, dystopias, and young people taking bold, exciting risks. When older people get involved with sci-fi, the question can become how to make them younger again, like the '80s classic Cocoon or Star Trek: Insurrection.

Robot & Frank is a sci-fi movie that looks at aging as it is, and how technology could change our lives in ways smaller than most movies, but asking questions every bit as urgent.

Despite the movie’s title, Frank Langella’s Frank Weld gets top billing in this 2012 movie. Frank is old, and he just keeps getting older. He lives alone in a big house in upstate New York. He's been divorced for decades, and while his two adult children love him, they’ve got their own lives to focus on. His memory is failing, the house is becoming a mess. So his son Hunter (James Marsden) buys him a helper robot.

Based on the Honda ASIMO, Robot & Frank takes a mostly old-school approach to its visuals with practical effects. A sterile sort of adorable, Robot’s design was created by artists associated with Daft Punk. In real life, actress Rachael Ma stepped inside the heavy suit and gave the robot life. In a 2013 interview, she described the difficulties of portraying Robot:

"The heat, lack of vision and immobility of the parts made bringing the robot to life difficult."

"The robot is all-encapsulating in two layers: the first layer is a thick, rubber unitard that covers everything- head to toe, and then a delicate, fiberglass shell of body parts, including non-ventilated helmet lined in mesh and foam. No breathing room, no A/C, no fans. Just sweat. And wow, it was hot! We shot 12 hour days, outdoors, during a heat wave in the summer for 5 weeks. I was constantly dehydrated, nauseous and fainting."

But Ma, and her vocal partner Peter Sarsgaard, absolutely pull it off. Robot is funny and friendly, and when the audience learns that Frank is actually an ex-thief and is recruiting Robot for a heist, it’s hard not to root for the duo.

The heist is decidedly low-stakes, but with a sweet purpose. Frank wants to rob the local library, which is in the process of being “revitalized” by evil future hipster pre-Succession Jeremy Strong. He wants to do this to impress the town’s librarian, Susan Sarandon’s Jennifer. While the heist goes well, it turns out that not everything is as it seems in the small town, with Frank’s memory increasingly deteriorating.

Robot & Frank is a sweet, funny movie about a real problem. Experts estimate that by the year 2050, 27 million Americans will need some form of long-term care or assistance. It’s an under-examined problem that Robot & Frank handles brilliantly.

It’s a movie with relatively small stakes — can an elderly man maintain his independence? But through science fiction, the stakes don’t feel so small. Rather, they feel deeply relatable. Anyone who's had to care for an elderly family member will likely resonate with parts of Robot & Frank. If only they had a Robot to help.

Robot and Frank is streaming for free on YouTube in the U.S.