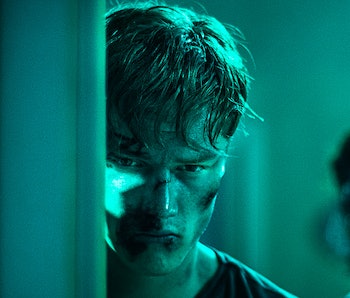 One of the joys of cinema is freedom. As long as the camera can fit, there’s freedom to show just about anything from Mordor to Tatooine and back again. This is what separates movies from other forms of entertainment like stage plays that by their very nature are restricted to a select number of settings.

However, one movie that’s streaming now on Netflix borrows the claustrophobic nature of live theatre and uses it to focus on interpersonal dynamics — and killer threats.

Await Further Instructions is a 2018 sci-fi horror film directed by Johnny Kevorkian. With the exception of a few establishing shots, it takes place entirely within a single house. This restriction allows for most of the conflict to be fueled not by the external enemy, but by the internal conflicts between the characters as they try to react to their situation.

The film follows the Milgram family as they gather for a Christmas dinner. Tony and his wife Beth welcome their pregnant daughter Kate and her husband Scott as well as their son Nick and his Indian girlfriend Annji. Together with Nick and Kate’s granddad, they make small talk that turns prejudiced against Annji quickly.

It feels like a tense family drama until Nick and Annji get fed up and decide to leave, only to find the walls of the house are closed off and there’s no way to escape. Like any good suburban family in crisis, they huddle around their only source of information: the television. The rudimentary instructions displayed on the screen stoke the Milgrams’ survival instincts as they debate their trust in the media, the government, and ultimately, each other.

The horror elements of Await Further Instructions are dialed up slowly as the family realizes they’re not facing a pandemic apocalypse or a zombie apocalypse — they’re facing something far worse, but just as familiar. The enemy, ultimately, is the television telling them what to do.

This is taken more literally than you’d think — in fact, the entire third act is a celebration of literal symbolism. It’s a parable about reliance on technology, so the technology takes control. It’s a story set at Christmas, so there’s an actual birth combined with the birth of a new era. Even the family name, Milgram, refers to the Milgram obedience experiment. If you’re someone who often misses out on the film school readings of movies, you’ll have no trouble here.

The restrictive setting combined with this literality shows just how complex a film can be without relying on sweeping cinematography and complex symbolism. A movie can simply stand on its own through personal relationships and conflicts, social commentary, and dedicated acting. Await Further Instructions is a lesson in simplicity wrapped in a green-tinged technological parable.