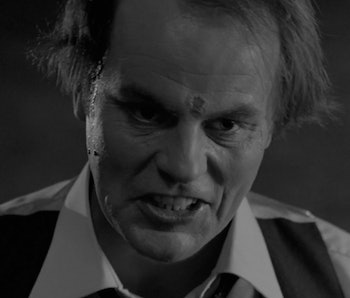 What if thoughts could kill? For one thing, we would have quite the mess on our hands. At least we would if the maestro of body horror was behind such a display of power.

Written and directed by David Cronenberg following successful explorations of body horror in Shivers (1975), Rabid (1977), and The Brood (1979) came arguably his best entry in the subgenre. We’re talking, of course, about Scanners.

Despite being one of Canada’s most interesting filmmakers, Cronenberg was still a cult filmmaker before the release of Scanners, yet to be catapulted to Hollywood success Videodrome (1983), The Dead Zone (1983), and The Fly (1986). As such, Scanners stands as an interesting bridge in Cronenberg’s career, a showcase of a filmmaker who had managed to define his voice on his own terms, and a burgeoning auteur lacking the polish of his later works.

Scanners centers on a group of people with telepathic and telekinetic abilities known appropriately enough as “scanners.” The private military company, ConSec believes these scanners could be the weapons of the future. Some scanners, like Cameron Vale (Stephen Lack), unable to control his powers, become unwilling recruits for ConSec to hunt down and control renegade scanners. Another scanner, the insane Darryl Revok (Michael Ironside), leads an underground movement of scanners to wage war on ConSec and any scanners found in their service. But Revok’s scanners are opposed by another independent group, led by Kim Obrist (Jennifer O’Neill).

In true Cronenberg fashion, the filmmaker makes this not-too-distant future plausible and grounded. This is partly due to budget, and the film’s setting, shot in Canada, looks a lot like, well… Canada. But this ultimately feels like a highlight, creating an uncanny sense of unfamiliarity in a familiar-looking world.

Of course, any conversation surrounding Scanners immediately turns to that explosive ending that has become so prevalent on the internet, familiarizing even those who haven’t seen the movie with the power of the scanners. But that moment, and the iconic telepathic battle at the end, are big moments in an otherwise small film with big ideas.

Most of Scanners plays like a political conspiracy thriller. Dr. Paul Ruth (Patrick McGoohan) believes the scanners to be the next stage of evolution and teaches Vale to control his abilities, while Vale tries to stay ahead of Revok’s assassins, leading him to Obrist, and the disturbing secret behind the scanners’ powers.

Those expecting a steady stream of exploding heads will likely find themselves wanting. Scanners is methodically paced, and there are admittedly moments where it drags, in part because Lack’s Vale is less interesting to watch than Ironside’s Revok. But those conspiracy theorists fascinated by the CIA’s Project MKUltra and Project Artichoke will likely find a lot to latch onto here.

For those looking for simple thrills, or something akin to Stephen King’s Firestarter, Scanners delivers a fascinating look at what happens when superpowers become the world’s greatest commodity. In some ways, it’s easy to view Scanners as a “what if?” X-Men story, removing the characters from their superhero association.

Scanners is an essential part of Cronenberg’s filmography and an example of a cult classic that while mixed upon release has become considered one of the essential contributions to science fiction. Come for the exploding heads, but stay for the critique on the ties between governments and pharmaceutical companies.

Scanners is streaming now on HBO Max in the U.S.