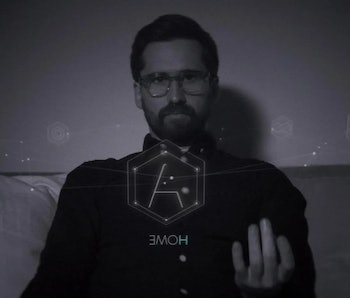 One of the biggest technological questions of the day can be summed up in six letters: VR or AR? Which technology will end up being more popular? All-encompassing virtual reality, which is being heavily pushed by proponents of so-called Web3, or augmented reality, which takes pieces of the virtual and mixes it with the real?

Augmented reality has a head start. The most popular version of the technology is Pokémon Go, which drew millions of players out of their homes and turned inauspicious locations into gaming hotspots. But AR hasn’t fully caught on, and smart glasses are especially unpopular. From Snap’s Spectacles to Google Glass to Facebook’s Ray-Ban Stories, the technology simply hasn’t carved out a market.

The 2015 movie Creative Control, directed by Benjamin Dickerson, offers a reason why. The darkly funny film about insufferable Brooklyn creatives shows the dangers in believing that any technology can improve the lives of people who just want to get worse and worse.

Dickerson stars as David, who works for an ad agency with Reny (Himanshu Suri, better known as rapper Heems) and Scott (Gavin McInnes, the co-founder of Vice Media who would later form the neo-fascist Proud Boys). They’ve just landed a big new account, smart glasses company Augmenta, by promising they’re going to make the glasses hotter than hot. “Not Main Street, it's Bedford Avenue," they promise, referring to a fashionable stretch in Brooklyn’s Williamsburg.

Part of their plan is to give the artist Reggie Watts (who plays himself) a pair of their glasses, opening their platform up to new possibilities as Watts experiments with the tech. David gets a pair himself, a welcome distraction considering all the stress in his life. His relationship with yoga instructor Juliette (Nora Zehetner) is on the rocks, complicated by his friendship with dilettante photographer Wim (Dan Gill). Wim has a girlfriend of his own, Sophie (Alexia Rasmussen), but is happy to use his job to sleep with as many models as he can. David is jealous of Dan’s hedonistic life, but he’s even more covetous of the person David’s ignoring, Sophie.

Dan spends time with Wim and Sophie while Juliette is off at a yoga retreat, and a drunken night of chemistry with Sophie deepens his obsession. Not wanting to address his issues with Juliette, David instead turns to his Augmenta glasses, using their interface to create a virtual version of Sophie. This Sophie acts exactly how he wants her to, and tells him exactly what he wants to hear.

Augmenta creations, which appear in sharp color, are the only exception to the black and white that Creative Control is otherwise filmed in. It’s a decision which makes Augmenta seem magical, like how AR glasses have been advertised in real life. Watching an ad for Microsoft’s HoloLens, Dickerson told The Verge in 2015 that “I couldn’t believe it when I watched it, I was like, you handed this to me on a silver platter, Microsoft!”

The biggest challenge facing David’s agency is finding hip uses for the glasses. In real life the HoloLens is the only pair of AR glasses that have sold well, and they’ve done so in the decidedly uncool field of construction. But while Reggie Watts is off designing elaborate artistic projects for his Augmentas, David is using them to re-live his memories over and over again.

One of the movie’s most effective sequences sees David talk to Reggie through his Augmentas. As Reggie explains his love for the technology, David is increasingly bombarded by texts and emails from Juliette and his multitude of bosses. Barely paying attention, an overwhelmed David gives the okay to whatever Reggie is planning, the full reveal of which becomes another of the movie’s highlights.

With a score driven mostly by the classical sounds of Vivaldi, Creative Control moves between David’s downward spiral and Juliette’s yoga retreats. The yoga sessions she runs with Gary (H. Jon Benjamin) and Govindas (Paul Manza) are just as heartless as the ad agency’s commercial shoots. Separated, both parts of the couple struggle to control any of their baser urges.

They often fail, and there’s a lot of booze, pills, and sexuality in Creative Control because of that. The movie walks a careful line between critiquing and celebrating its hedonism — the parties are pure 2010s hipster gold, but they frequently end with vomiting and misery. In his interview with The Verge Dickerson refers to "aesthetic bohemians,” and that’s what’s on display here. David, Scott, Wim, and Remy dress themselves in the pretensions of cool, but they’re all just one mustache-shave away from being the same as everyone else.

Anyone looking to avoid a movie about insufferable people could easily stay away from Creative Control, but the movie is more than that. It’s working on themes that would later be fully realized in the Safdie brothers’ ecstatic Uncut Gems, most notably a conversation about the suffering needed to create the technologies that people take for granted.

But while Creative Control’s characters are hollow shells, the movie itself is earnestly interested in their fates. Technology can spin out universes all of its own, and it’s easier than ever to get wrapped inside them. Creative Control asks if people can pull themselves back once they’ve gotten sucked in.

More like this
Culture
Jan. 13, 2023
How Jake Gyllenhaal and Ryan Reynolds made a shockingly good Alien ripoff
By Josh Bell
Culture
Jan. 17, 2023
Decades later, it’s still impossible to overstate Jurassic Park’s awe and terror
By Laura Kelly
Culture
Jan. 21, 2023
Steven Soderbergh’s only sci-fi film is also one of the century’s most underappreciated
By Mark Hill
LEARN SOMETHING NEW EVERY DAY.
Related Tags
Share: