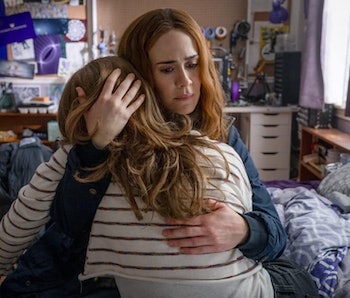 This article about the film Run was originally published on February 25, 2020 and updated on July 13, 2021 following the movie's release. Read on for the original article, with some new changes to reflect the latest updates on this topic.

It's hard not to have a good time when you're watching Sarah Paulson go full-tilt into what's becoming a comfort zone of hers: playing an unsettling character trapped in a horror movie. So, naturally, her feature film Run looks like a metric ton of fun. The skin-crawling feature comes from the mind of writer/director Aneesha Chaganty (aka, the guy who gave us the found-footage film Searching starring John Cho).

Here’s everything you need to know about Run.

When was the Run release date?

Run was initially planned to release on May 8, 2020 to coincide with the Mother’s Day weekend (appropriate given the film’s content). But the COVID-19 pandemic shuttered theaters worldwide, putting the release on hiatus. Hulu picked up the distribution rights and eventually released it on their service on November 20, 2020. Netflix grabbed the international streaming rights to Run and released it outside of the U.S. on April 2, 2021.

Who is in the cast of Run?

Run stars Sarah Paulson, who many of us know and love from her work on multiple seasons of FX's American Horror Story and American Crime Story as well as films like Glass and Bird Box. Paulson plays Diane Sherman, mother to Chloe Sherman. In an interview with Entertainment Weekly, Paulson revealed she took inspiration to play Diane from Piper Laurie's performance as Margaret White, Carrie White's mom in the 1976 horror classic Carrie.

Chloe is played by Kiera Allen, an up-and-coming actor who makes her feature film debut with this horror-thriller. While speaking with Collider back in December 2018, Allen revealed she auditioned while studying creative writing at Columbia University and went through four rounds of auditions before she snagged the role of Chloe.

What is the plot of Run?

Run falls into the special sub-section of the horror/thriller genre which focuses on bad moms. Moms who kill, who smother their kids, who have dark secrets, who try to control their progeny, and all things in between in movies like Mother's Day, Carrie, Friday the 13th, and Mommie Dearest.

The film follows a mother-daughter duo, Diane and Chloe Sherman. Chloe is born with special health needs and Diane rises to the occasion, ready and willing to be a full-time caregiver to her daughter. By the time Chloe is a teenager, though, she begins to sense that something isn't quite right with her mom and decides to go digging for the truth. Turns out, Diane has been keeping some big secrets from her daughter, throwing them both into a cat-and-mouse game as Chloe tries to escape mom's grip and get help.

Is there a trailer for Run?

Yes, and it's pretty chilling as we watch homeschooled teen Chloe get more and more freaked out as her mother spins out into the ultimate helicopter parent. Check out the official trailer, which arrived in February 2020, below:

Is there a poster for Run?

Two posters offering different but very unsettling takes on the tale audiences will see in May were dropped ahead of the trailer. The first is an illustrated poster reminiscent of the poster artwork Saul Bass created for movies like Spartacus and Vertigo.

The second poster is a bit more traditional. Keeping the monochromatic color palette, the poster features Paulson and Allen and teases their intense bond with one another.

What did critics have to say about Run?

Run has an 89% rating on Rotten Tomatoes and a score of 67 on Metacritic. Hulu reported after its opening weekend that it was the most-watched original film in the streaming service’s history.

More like this
Entertainment
21 hours ago
Everything we know about Dune: Part Two
By Gabrielle Bondi and Ryan Britt
Entertainment
6.23.2022 11:30 AM
15 years ago, Bruce Willis made his most preposterous action thriller ever
By Vance Osteen
Entertainment
6.19.2022 11:30 AM
You need to watch the best monster thriller of the '90s before it leaves HBO Max next week
By Mónica Marie Zorrilla