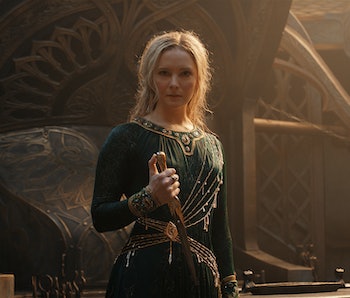 All we have to decide is what to do with the time that is given us.

Fans of The Lord of the Rings: The Rings of Power are about to have a lot of time, as Season 2 of the epic Amazon Prime Video series won’t premiere for a long, long while.

But with the epic Season 1 finale still fresh on our minds, it’s not unreasonable to ask what’s in store for Season 2.

Inverse caught up with three members of the cast — Markella Kavenagh (Nori), Morfydd Clark (Galadriel), and Daniel Weyman (The Stranger) — to get some insight into what their characters are up to next.

Spoilers for The Rings of Power Season 1 ahead.

Nori and the Stranger Take a Walk

At the end of Season 1, Nori learns that the Stranger is not Sauron, but a wizard — or “istar,” as the Elves say. Is he Gandalf? No one is willing to comment.

With the loss of Mr. Burrows (Sir Lenny Henry), the Harfoots again pack up and move, but Nori is advised to accompany the Stranger. As Nori is told by her loved ones, she’s part of something bigger now.

Both Markella Kavenagh and Daniel Weyman tell Inverse that all of Middle-earth is open to their characters now. Their goal is to seek the constellation that will reveal the Stranger’s true identity.

“They’re trying to find the stars, what they mean, and whether they’re gonna help the Stranger find his home,” Kavenagh says, who adds that Nori has her own plans. “She’s there to help him and wants to find out, she’s just as intrigued. But I do think it was important that for Nori there was something else.”

“It’s all open road, isn’t it?” Weyman says, adding that he believes Nora and the Stranger are on the same footing in the closing moments of Season 1. “I feel they’re as equal as can be. No one holds any knowledge, other than the fact they can look at the stars. They’re on their own, together. And that’s a really exciting place to start the second season from.”

Weyman says his Stranger is essentially a new character in Season 2, now that he can speak and isn’t so hunched over.

“Nori is going on this journey with a slightly new character, one that can speak,” Weyman says. “What is speech going to give us? Is that going to come with the memory or agelessness that wizards should have? How does his wisdom come through?”

Weyman says the Stranger’s more refined posture also makes him feel like a new character to explore. “He’s been quite hunched,” Weyman says. “I think his physicality is up for grabs. How will the fact that he’s taken this choice to walk a particular path change how he moves physically? How’s he able to harness energy? We’re at a really exciting place.”

While Weyman’s journey as the Stranger is external, Kavenagh’s as Nori is more internal. The actress says Nori is secretly embarking on her own mission: To help the Harfoots find a permanent home.

“There’s a greater purpose she feels for herself, and potentially for the Harfoots to find a better quality of life, and to help them find a solid home,” Kavenagh tells Inverse. “I think she’s got that in the back of her mind. It’s in the back of my mind as well.”

Morfydd Clark tells Inverse that Galadriel, the mightiest and fairest of all elves, is straight up not having a good time.

When asked what she thinks Season 2 has in store for her, Clark says, “I hope that redemption awaits her. Because she has made mistakes.”

It’s true that Galadriel has been striking out in The Rings of Power. Between all the politicking she had to do in Númenor that ultimately accomplished nothing beyond stranding an army in the ashes of Mordor, and finding out Halbrand (Charlie Vickers) — the man she saved, and the man who saved her — is Sauron, Clark says that Galadriel is being extra hard on herself as Season 1 ends.

“She so wanted to fulfill her quest for vengeance, that she made Halbrand whoever she wanted him to be,” Clark says. “There was actually barely anything saying that he was the King of the Southlands. But it suited her because she needed to go to Middle-earth. She needed the Númenóreans to come. That is the moment she makes a terrible mistake.”

Clark adds that she’s relieved Galadriel sacrifices her beloved dagger to aid the forging of the rings, because it’s been holding her back. “I’m really glad that she melts down her dagger at the end,” Clark says. “Because the quest just for her is dangerous for others.”

The forging of the three Elven rings might be a chance for Galadriel to restore her sense of self. “I can say Galadriel will interact with Nenya,” Clark says, confirming that the white Ring of Water will be Galadriel’s to wear in Season 2. “The rings will forever alter Middle-earth and all those that wear them.”

The Lord of the Rings: The Rings of Power Season 1 is streaming now on Prime Video.

More like this
Entertainment
Dec. 1, 2022
The Rings of Power Season 2 is recasting one of its best villains
By Mónica Marie Zorrilla
Entertainment
November 28, 2022
Here’s why this Star Trek star thinks new Trek is more like Lord of the Rings
By Ryan Britt
Culture
November 26, 2022
How Darren Aronofsky's oddest sci-fi movie inspired a real quest for longevity
By Peter Ward
Related Tags
Share: