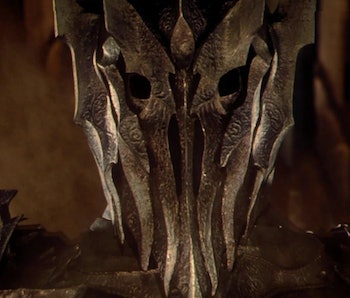 Where is Sauron? That question’s been on the minds of J.R.R. Tolkien fans ever since Amazon began releasing photos and footage from The Lord of the Rings: The Rings of Power. The new series is set primarily during the Second Age of Middle-earth, the era in which, among other things, Sauron helped forge the Rings of Power.

Despite that, Amazon has yet to reveal anything about the villainous Dark Lord’s role in the series, including who’s playing him and when he’ll show up. According to one fan theory, that may be because Sauron won’t actually have a major role in the first season of The Rings of Power.

Introducing Adar — In March, noted leaker Fellowship of Fans tweeted that it believes the main villain of The Rings of Power Season 1 will not be Sauron, but an original character named Adar, who is said to be played by Game of Thrones actor Joseph Mawle. Fellowship of Fans also, notably, tweeted in February that the armor-clad villain featured in one of the series’ character posters (see below) is not, as many fans theorized, Sauron or the Witch-king of Angmar, but Mawle’s Adar.

Up to this point, no one involved in The Rings of Power has confirmed who Mawle is playing in the series, let alone if a character named “Adar” even exists. Therefore, this theory should be taken with a massive grain of salt for now.

That said, previous Rings of Power leaks have also suggested that Adar will be introduced as a “corrupted” and “tortured” Elf. Assuming those claims are all true, they do suggest that Adar could be a major antagonistic force in The Rings of Power’s first season. If that turns out to be the case, it raises the question of when Sauron will show up in the Amazon series.

Sauron’s Return — In an interview with Vanity Fair, The Rings of Power showrunners J.D. Payne and Patrick McKay said that the first season of the Amazon series will focus primarily on the show’s heroic characters. “We didn’t want to do a villain-centric thing,” McKay said, before teasing that the show’s second season will “go a little bit deeper into the lore and the stories people have been waiting to hear.”

So it seems likely that Payne and McKay may have chosen to hold off on formally introducing Sauron until the end of The Rings of Power’s first season, or the start of its second. If that’s what they chose to do, there’s a chance Payne and McKay may have also created Adar solely to fill the show’s villainous void until the moment when Sauron shows up in Middle-earth again.

While that may come as disappointing news to Lord of the Rings fans, it’s not out of the realm of possibility to think that a minor villain like Adar might have tried to establish dominance in Middle-earth in the years between Morgoth’s defeat and the reemergence of Sauron. After all, in the books, it wasn’t until 500 years after the end of the First Age that Sauron even worked up the nerve to start making moves in Middle-earth again.

The Inverse Analysis — The more fans learn about The Rings of Power, the clearer it becomes that the show’s first season isn’t going to be what many had predicted. That’ll be even more true than it already is if this Sauron theory turns out to be correct.

Fans will likely have to wait a while before they find out if this theory is true, but it would certainly explain why Sauron has been so absent from The Rings of Power’s early promotional materials.