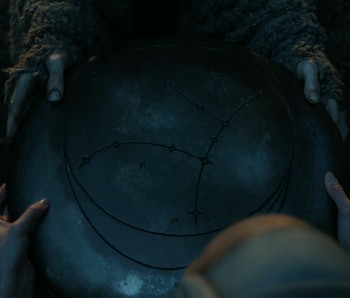 The Season 1 finale of The Lord of the Rings: The Rings of Power brings an end to many of the series’ ongoing mysteries, including the one that surrounded The Stranger’s (Daniel Weyman) identity ever since he arrived in Middle-earth via an explosive meteor strike. Despite heavily implying that The Stranger was secretly Sauron, The Rings of Power Episode 8 reveals that he is an “Istar,” which means both “wise one” and “wizard.”

While The Rings of Power’s Season 1 finale, titled “Alloyed,” doesn’t confirm which of J.R.R. Tolkien’s five wizards The Stranger actually is, it does reveal where he’s going. In fact, the episode ends by sending him and Nori Brandyfoot (Markella Kavenagh) on a new journey to a notoriously unexplored region of Middle-earth known as Rhûn.

A New Voyage — Early in Episode 8, The Stranger is told by the three mystical servants who mistake him for Sauron that the stars he’s been looking for all season can only be found “far to the East, where the stars are strange.” The Sauron cultists soon specify that he must go to “the lands of Rhûn” if he wants to reach his destination. Later, The Stranger tells Nori that he must go to Rhûn if he wants to learn the truth about his purpose in Middle-earth.

It would be understandable if viewers were left scratching their heads about both The Stranger’s new journey and the part of Middle-earth he’s intent on reaching. Rhûn has never truly been explored in any previous Tolkien adaptation, and very little was actually written about the region by Tolkien himself.

An Unexplored Region — As the Season 1 finale states, Rhûn lies far to the east of Middle-earth’s other kingdoms, including Rohan, Gondor, and Mordor. It’s said that the first Men of Middle-earth awoke in a region even farther east than Rhûn. While some of the first Men eventually traveled to the West, others remained in Rhûn. Many of those who stayed behind became known as Easterlings, and began to worship Morgoth and Sauron.

During the Fourth Age, it’s said that the westernmost parts of Rhûn were eventually subdued and conquered by the Gondorians under Aragorn’s rule. Beyond that, little is known about the history of Rhûn and its people, but it is said that two members of the Istari, known only as the Blue Wizards, were sent to Rhûn by the Valar during the Second Age.

The two wizards were allegedly sent to quell some of the region’s intense support of Sauron to help the Elves, Dwarves, and Men of Middle-earth in their ongoing fight against the powerful Dark Lord. In the Third Age, Saruman also briefly journeyed into the East, but it’s said that the two Blue Wizards never returned from ​​Rhûn.

The Inverse Analysis — Regardless of which wizard The Stranger turns out to be, his mission in The Rings of Power is exciting. The eastern parts of Middle-earth have remained famously mysterious for decades, but by sending The Stranger to Rhûn, The Rings of Power has given itself the chance to explore the region and investigate new conflicts in the lands where “the stars are strange.”

Season 1 of The Lord of the Rings: The Rings of Power is streaming now on Prime Video.